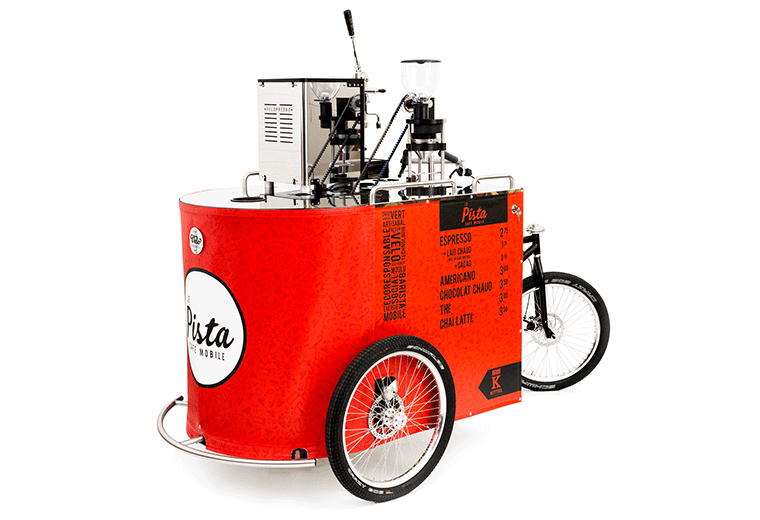 I can’t remember the last time I saw something this kitschy on two-wheels, I mean three-wheels.

Chapeau to Velopresso for combining groove with "grind" !

Velopresso is a unique, highly innovative and fully integrated coffee tricycle, that combines great mobility and excellent espresso machinery with an ultra low-carbon, pedal-powered operation that requires no electricity.

Designed from the ground up around our unique rear-steer modular tricycle, pedal-driven grinder, and robust gas-fired lever espresso machine, Velopresso is a celebratory fusion of human power, sensory pleasures and technology – old tech with hi-tech, bicycles and coffee, their engineering and aesthetics.

The result is a highly efficient, robust and humanised machine with a compact footprint – no motors, no noise – enlightened coffee ‘on the go’, perfect for city streets and piazzas, at exhibitions and events, in parks and markets – wherever people congregate.

Velopresso is made to order by us – Velopresso Ltd – at our factory in east London, England.

We are now taking orders for the first and second batches (20 trikes per batch). The first batch of 20 machines is scheduled to be completed during December.

Velopresso offers many unique features, benefits and opportunities from a business, environmental and experiential perspective. When you buy a Velopresso, it is made to order, by us, for you, and fully branded to represent your business identity, whether you are an independent barista or an international corporation.

Owning a Velopresso gives you:

Artisan quality coffee: the Velopresso grinder — the first pedal-driven commercial coffee grinder in the world — offers fast yet cool, on-demand grinding at 300rpm and direct to the portafilter with almost no grind retention, producing the freshest of grinds. Put together with our commercial spring-lever espresso machine, you have a potent combination that – in the hands of an experienced barista – can compete with anything on the market for shot quality.

Transportability: if you want to take your Velopresso over a long distance you can load it into a van (you just need some ramps and tie straps) — removing the lever only, or the whole espresso machine and grinder if height is restricted.

Bolt-together modularity: if you want to use your Velopresso (as we did) in a grand old gallery with a restricted-width entrance door, you can dismantle the machine into modules — rear frame, top module, core module. It might take an hour or so to complete the re-assembly process, but if you have an event for a number of days, weeks or months that is still a very minimal set-up time for such an integrated solution.

Lowest operational costs: no petrol, no batteries to charge, no electrical components to breakdown, just robust and simple machinery that is engineered to last, with minimised operational costs. All you need is a gas cylinder, and access to a freezer overnight for your ‘cool blocks’.

Low carbon-footprint: with its use of human-power, Velopresso has a very low carbon-footprint in operation which is important in itself! – but is also likely to facilitate access to operate in more sensitive locations and environments with emission or noise restrictions (which would prohibit generators or other petrol-driven operations), such as national parks.

Innovative and fun: Velopresso introduces to our cities a new and engaging way of making coffee, via the cyclist–barista’s smooth-pedalled dynamic operation of the pedal-grinder, alongside the anticipatory drama of hand-operated pull and slow-motion rise of the espresso machine lever  – street theatre for coffee lovers!

Healthy & satisfying to operate: Velopresso offers the cyclist–barista the benefits of both an ergonomically designed machine – being seated yet pedalling during your working day, resting your feet, but also keeping you active and warm – and a tactile and satisfyingly direct involvement with the bean-grinding process: not just another push-button experience.

Velopresso is made in Britain. That doesn’t mean every single part is made here but about 90% are. We do this because it makes sense to utilise and support the incredible skills of the engineering industry on our doorstep, for the quality, price, and control this gives us; and because without the support and expertise of these same engineering companies during the prototyping phase we would not have got this project off the ground; and because manufacturing locally helps to reduce the carbon-footprint of our production process. The Made in Britain marque testifies to the providence of Velopresso, but also to the strong relationships between all those involved in its design and manufacture, and their passion for this work.

Velopresso is a complex, hybrid machine that required many (over 300) bespoke components which we commissioned from long-established and leading UK engineering companies.

Velopresso was conceived against the backdrop of the sustained global renaissance in cycling that is being driven by the desire for more sustainable cities and lifestyles. At last, the near hundred-year dominance of motorised vehicles is being seriously challenged, with cities like Copenhagen (Denmark) and Portland (USA) leading a return to the golden age of the bicycle. Services previously reliant on motorised transport are being increasingly performed by bicycles, cargo cycles, tricycles, etc., and this is happening alongside a more general deepening and expansion of bicycle sub-cultures.

Meanwhile the urban coffee scene, on a rapid rise since the mid-1990s, continues to expand and diversify into increasingly specialist market niches, including a new convergence with cycling culture – a long-standing love affair made concrete now in the form of bicycle cafés. Velopresso engages directly with these burgeoning, ‘zeitgeist’ urban cultures while turning this relationship on its head – with the cyclist once the consumer now providing the coffee by pedalling.

Our research into this project began in spring 2011, but draws on several decades of cycling experience, our industrial design and communication backgrounds, and a shared love of bicycles, fine coffee and the beauty and pleasure to be found in efficient mechanical machinery – particularly of the human-powered rotary nature. These passions are coupled with a firm belief in the need for designers to contribute urgently towards radical change in the way we live.

We wanted to showcase efficient human-powered, cycling-based technology that could easily replace electrical equivalents, and to instigate more sustainable urban business models. We quickly found focus with the commercial coffee grinder: while hand-grinding holds certain experiential, culinary and ritualistic pleasures for a few, it is far too slow for commercial use; the application of an electrical motor however is not as logical as it seems and has several pitfalls too. Pedal-grinding takes the best of both worlds: the bicycle-based transmission is one of the most efficient energy transfers ever designed; and the speed (rpm) and torque required for grinding coffee beans quickly, quietly and without overheating them are easily achievable with minimal effort. The ultimate commercial standard pedal-driven grinder became our goal, with a robust, versatile and ‘go anywhere’ tricycle and espresso machine system built around it, which could produce the highest quality espresso coffees with the smallest physical and operational carbon footprints.

Over 3 years, we invented, tested and refined for production, a lever-operated clutch system that switches the pedal drive from the wheels to an independent transmission for use when stationary; and our precision-made pedal-grinder design – a world first – that would be powered by that transmission alongside a pedal-powered rotary water pump. By partnering these with our commercial sprung lever group espresso machine (with its more subtle and artisan human-powered operation), we all but eliminated the need for electricity – a heat source not withstanding. But pedalling was not an option for either generating heat directly or for producing sufficient electricity for an espresso machine’s standard 3kW electrical heating element, so we chose a gas burner* that uses LPG.

LPG is a fossil fuel, but a low-carbon one. It is readily available worldwide and is a clean-burning, reliable and safe fuel to use. Partnered with an efficient and silent burner, it is the most robust and simple solution available today for providing sufficient heat to operate a commercial espresso machine on the move. We see this use of a fossil fuel as a temporary solution that in time will be upgraded with a new burner system, running on ethanol fuel derived from waste – ideally used coffee grinds. This proposed production of ethanol fuel from the sugars in waste coffee adopts the existent progressive model of alternative zero-carbon fuels being derived from abundant urban waste streams, with intelligent collection of the substrate and localised production. We conducted initial laboratory research (to test viability) in 2012 with positive results and began mapping the coffee waste collection and ethanol production scheme. The logistics were favourable but the lab research required to optimise the sugar extraction process would have taken considerable funding and time. As a result we focussed on the development of the Velopresso trike and plan to revisit the alternative fuel project once the Velopresso machine is successfully in production.

We see Velopresso as a small cog in a much bigger wheel of change – a step in the right direction – and are motivated by a determination to be part of a bigger solution. By presenting this kind of efficient, fun and more sustainable low-carbon option for a popular and highly visible application – coffee on the go – we hope to encourage more people to take up the challenge of seeking low-energy alternatives for our everyday transportation and service needs. We see the bicycle – one of the simplest but greatest of inventions – as key to our back-to-the-future approach to innovation.

* The first Velopresso prototype espresso machine was designed around a mountaineer’s multi-fuel stove that could run on camping gas or diesel or ethanol in principle. The idea being that bio-ethanol could in theory at least takeover as the fuel in time. With the bio-ethanol project on hold, this was used on camping gas until June 2013 when we completed development of the FCL1-Velo espresso machine with Fracino – a more compact and Velopresso-specific, gas-only version of their commercial, dual-fuel lever machine (FCL-1).

This machine uses a near-silent and very efficient burner running on LPG – propane or butane.

Velopresso Ltd was founded in December 2012 and registered in England by industrial design partners Lasse Oiva and Amos Field Reid. We remain sole owners and directors of the company that will manufacture, assemble, test and ship our designs around the world, so we’ve kept our independence intact.

Amos received a first-class degree in furniture and product design from London Metropolitan University and worked as a furniture designer/maker and design consultant before completing an MA on the Design Products course at the Royal College of Art (RCA), where he was the recipient of a Man Group Scholarship. This followed a ten-year career in film production as a researcher and project coordinator. Velopresso represents his first large-scale design project and draws on his life-long involvement with cycling, which includes five year stints of road and track racing and working as a London bicycle courier, as well as many years of daily urban riding.

Lasse studied industrial design at Lahti University of Applied Sciences, Institute of Design (Finland). While at Lahti he completed projects with manufacturers and technology firms including Rocla/Mitsubishi (forklift); Kemppi (welders protective wear) and Lahti Precision (precision machinery). Before attending the RCA he worked as a freelance designer in Finland on projects for ISKU (task chair) and the Economic Information Office (children’s learning environment). Lasse is also one of the founding members of the Helsinki-based, multi-disciplinary design studio Musta Design, a keen fisherman and committed cyclist.

Velopresso is their first major joint project, and is expected to be followed by further work in pedal-powered innovation.