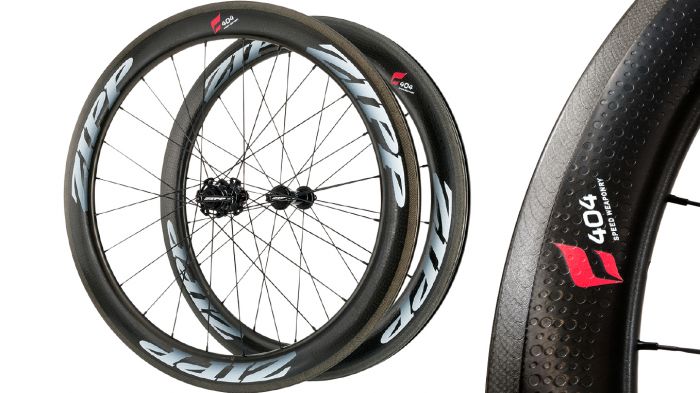 The Firestrike uses the same mathematically derived (CFD) rim shape as it’s predecessor the Firecrest. However, Zipp has given the Firestrike a different shape, along with a new ABLC dimple pattern.

The new ABLC dimple pattern stands for Aerodynamic Boundary Layer Control, which is designed to shed vortices at higher frequency and shorter amplitude.

According to Zipp, this equates into a wheel that’s less prone to the effects of cross winds, which can create low pressure build up on the opposite of the rim – which in turn causes  sudden and forceful "jerking" between detaching gusts and low pressure release.

According to Zipp, these changes have resulted in a 34% reduction in side force, which translates into less "push" against the the wheels during heavy cross winds – i.e. greater stability.

Next, Zipp improved the Firestrike’s braking capabilities (especially during wet conditions) with a new design technology – they call  "Showstopper".

Showstopper incorporates a mix of Silicon Carbide (SiC) into the resin, which is subsequently applied to the brake track. SiC claims to be one of the hardest materials on the planet, which according to Zipp – increases the coefficient of friction and prolongs the life of the ridges molded into the brake track. In addition, SiC also improves heat dissipation as well. Moreover, said ridges have been molded into the braking surface to further help shed water and create additional surface texture for more friction during stopping in wet conditions.

Lastly, Zipp claims to have developed a new molding process that has improved the Firestrike’s impact resistance, along with a wider clincher bead platform which serves to reduce tire toll during cornering, and improve traction.

Additionally, Zipp has also incorporated their new 88/188 v10 hubs. Compared to the previous  v9 hubs, wherein the preload had to be adjusted, the preload is now preset by Zipp beforehand.

Furthermore, weight has also been reduced by machining more material out of the flanges, which according to Zipp, yielded a 20g reduction in weight across the hubset. Zipp has also equipped the new Firestrike with ceramic ABEC 3/Grade 10 bearings as well.