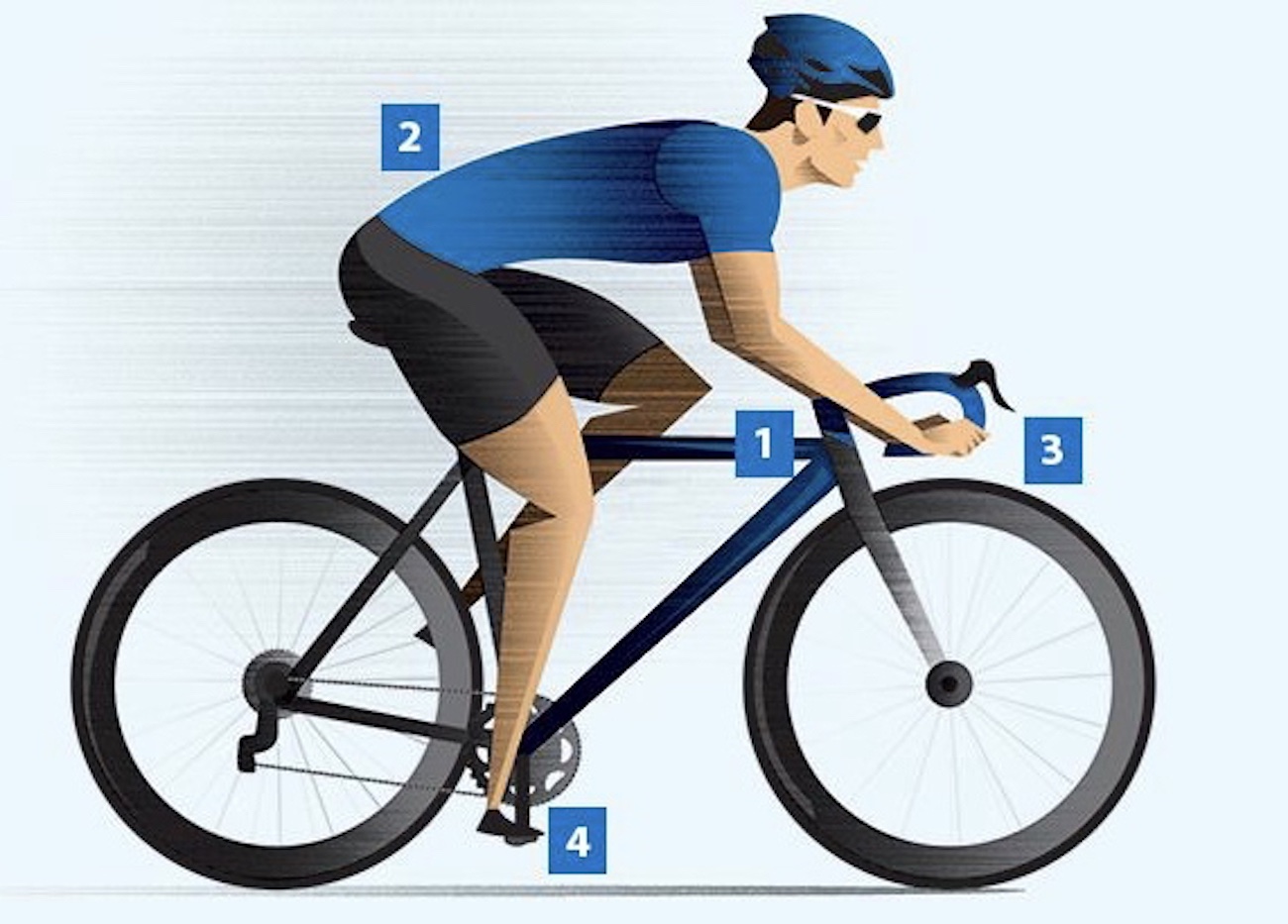 article by Steve Maxwell of The Outer Line

In late March of this year, I was involved in a mass crash during a rain-soaked bike race near Christchurch, New Zealand and landed hard on my left hip. Although the initial x-rays appeared clear, I was in continuing pain, and a later MRI showed that I had actually fractured my acetabulum – the “hip socket” portion of the pelvis. Fortunately, it was a clean break that did not require surgery, but it was imperative to keep weight off my left leg, and hence I had to be on crutches for about six weeks. I was off the bike for about two months rehabilitating.

When I was finally able to get back on my bike in mid-May, I made it a point to get a cycling performance assessment and some formal advice on my bike fit. I had been planning to complete a cross-country bike trip during the spring which obviously had to be postponed, but I was still hoping to complete the ride later in the year. When I looked into the market for this type of physiological analysis and bike fit, I found a wide range of competing fit technologies and philosophies offered by bike shops, physical therapists, and specialized expert bike fitters.

A physical therapist I had been working with during my recovery recommended that I consult with Dr. Larry Meyer, PT DPT. Dr. Meyer works with a specialized fit and performance assessment system, called Qualisys Sports Performance, that helps customers assess and analyze athletic position, styles and techniques – to improve performance and reduce the risk of injury. This Swedish-based company has a long history of supplying sports-related facilities with high-end camera systems and motion detection and analysis expertise. In fact, numerous national teams and Olympic committees have already teamed up with Qualisys as their prime biomechanics partner – allowing their athletes to become faster, stronger and less prone to injury. The basic idea behind the Qualisys system is to help ensure that the body is functioning in the way it’s intended to, reducing the risk of injury and helping athletes improve their results with less effort.

Traditionally, there has been a focus on the dimensions and performance of the bike itself when fitting it to the rider or when optimizing performance, but the Qualisys cycling module goes one step further and accurately measures the movement of the cyclist relative to the geometry of the bike and the pedal phases. To accomplish a complete 360° full-body three-dimensional analysis of the athlete’s technique, Qualisys utilizes a highly sensitive system of eight to 10 surrounding cameras that track and record all of the athlete’s movement and performance, from head to toe. With a rate of 400 frames per second, the system offers significantly higher precision and accuracy than other motion-capture technologies (such as marker-less video analysis and methods based on wearable inertial sensors).

In July, I underwent a full physical assessment, bike fit and performance review with this Qualisys cycling analysis system at the Build You sports performance lab and physical therapy office where Meyer and his associate, Jessica Bishop DPT, practice in Louisville, CO.

Before my test began, 33 different reflective markers were placed on various parts of my body (feet, ankles, knees, hips, shoulders and head) to assist in accurately measuring and assessing the three-dimensional aspects of all relevant motion during cycling. Markers were also placed on the bike to record saddle height, handlebar drop/rise and stack/reach with sub-millimeter precision. The cameras were positioned so as to track and record every subtle detail and all the minute interactions between the various parts of both my body and the bike.

My bike was then positioned on a stationary trainer. I hopped on and began pedaling. Side and rear video views popped up on a computer screen in front of me. As soon as the data was collected, a “stick figure” representation of me emerged on another screen, which showed the location and precise movement of every one of those individual reflectors, and the limbs or muscles connecting them. My pedaling cadence and resistance were optimized, and then the system captured a few minutes worth of very detailed motion-based data over multiple power-based trials.

A detailed report was immediately generated which tracked all of my movements in three dimensions, recording measurements of my left and right sides simultaneously. Every movement was then evaluated by Dr. Meyer to very precisely and objectively measure limitations such as asymmetries, lack of movement range, or apparent lack of strength.

Graphical 3-D summaries and detailed tabular statistical analyses were generated for all relevant parameters – such as rotation angles of the pelvis, hip, knee and upper body as well as movements paths of the knee, ankle, toe and heel in all anatomical planes. Meyer analyzed each one of these metrics for both legs at all four phases of the pedal rotation.

After watching me pedal for a few minutes and analyzing the screens, Dr. Meyer adjusted my bike position and the orientation of the cleats on my shoes. “For me, it is always test, test, and retest,” Dr. Meyer said. “Test and find any movement problems and examine possible reasons for those problems. We can modify the bike, educate the client and then design the best strategy to fix the problem. Then we test again, to see if the parameters have changed.”

Dr. Meyer’s analysis uncovered some interesting conclusions about my form, flexibility and cycling technique. I assumed that the healing from my hip injury was likely having some sort of impact on my overall form, flexibility and performance. To the contrary, Meyer found that although I was still a bit weaker on that side, the range of motion in my left hip was by now actually superior to my right hip.

More noteworthy were some apparent consequences from an unrelated surgery I’d had several years earlier on my right ankle. Following the removal on a bone spur on my lower tibia four years ago, I had lost some range of motion in terms of my ankle dorsal and plantar flexion – the capability to, respectively, pull your toes toward or push your toes away from your shin. Because of this relative lack of flexibility, at the top-dead-center position of my right pedal stroke, my ankle was not able to sufficiently dorsally flex, causing my knee to tend to flex or “flare” slightly outwards. Although not significant enough to be seen on the rear-view video representations, the fine resolution of the Qualisys system determined that, at the top of the pedal stroke, my right knee was moving to 17.8 centimeters away from the perpendicular line of my bike top tube, whereas my left knee at top dead-center was located just 15.7 centimeters away from the top tube.

I definitely knew that my ankle surgery had affected my running ability, and it had taken me months of physical therapy to even recover my normal walking gait. However, from a “gut feel” perspective, I didn’t think the ankle incident had really impacted my cycling activity much. But this more detailed Qualisys data was able to pinpoint what was probably my most critical constraint. My somewhat limited range of ankle flexing motion on the right was assessed to be affecting both my position and motion on the saddle, and likely decreasing my overall efficiency and power somewhat. A physical therapy program of stretching my calf muscles and manually increasing the dorsal and plantar flexion capability in my ankle was recommended to help address this (admittedly relatively minor) problem. It was also suggested that I might experiment with a slightly shorter crank length to lessen the amount of necessary dorsal flexion at the top of the right pedal stroke.

Meyer said his approach to bike fit and his system for analyzing cyclists can be viewed as simply remediating or compensating for multiple apparent problems. Either the bike or the cyclist can have multiple problems that can contribute to lower performance or injury. Sometimes you need to (1) remediate the problem – in the case of the bike, you could adjust the cyclist crank length, or adjust the seat height. In terms of the cyclist, you may treat them to restore hip or ankle mobility. When it comes to (2) compensating for a problem, you have to adjust to what you have. An obvious position bike adjustment (i.e. saddle height) may not have the ability adjust any further, so you will need to compensate somewhere else. Cyclist’s bodies are no different. Sometimes cyclists have a permanent limitation (such as reduced shoulder range of motion from a previous clavicle fracture) and you need to experiment with different ways for positioning them on the bike.

Bike fit experts like Meyer typically have enough experience to be able to subjectively see these sorts of problems or issues just by watching and studying the cyclist’s movement while they are pedaling. However, it’s never obvious how all the different variables interact with each other, as you strive to maximize the fit and performance. One small problem or variation in one area can lead to adjustments or compensations in other areas that may affect your overall motion and efficiency – and the Qualisys cycling analysis system can help to provide insights that are not available from traditional analysis and motion studies. The Qualisys system, says Meyer, “can provide some very useful and strictly quantitative back-up information to support – or sometimes question – your qualitative assessment of fit. It’s a huge help in understanding how to fit all the pieces of the puzzle together.”

If you are a serious recreational cyclist like me, Meyer’s analytical approach may suggest some changes in your bike set-up, a different crank length, a modified shoe orientation, new shoe inserts, or stretching and strengthening exercises – some combination of which can result in a more comfortable and rewarding cycling experience, and perhaps improved performance and endurance levels. Most importantly for me, going through this assessment and adjustment helped me to go ahead and complete my planned cross-country ride – just a little bit later in the year.

On the other hand, if you are a competitive amateur or a professional cyclist, insights about these kinds of small inefficiencies or restrictions, and the creation of improved remediation or compensation adjustments could be key to measurable or perhaps even critical racing performance enhancements. Meyer hopes as the Qualisys technology is enhanced and fine-tuned, and as it is increasingly applied to assess cycling efficiency studies, that more and more cyclists will be able to benefit from it to improve their own experiences and performance levels.