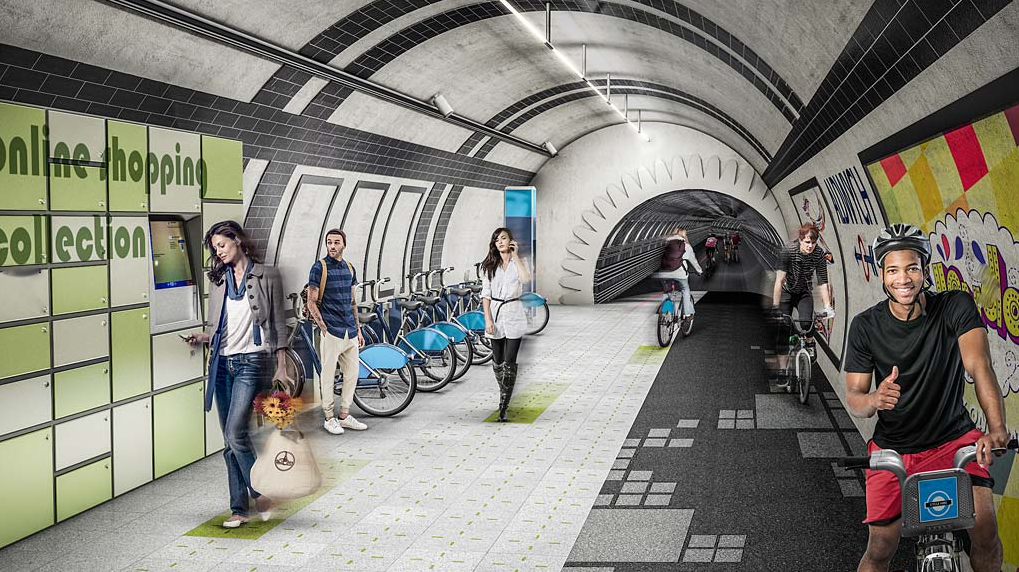 Gensler is delighted to announce that The London Underline project has won the award for Best Conceptual Project at the London Planning Awards, hosted by the Mayor of London Boris Johnson.

Conceived in 2014, The London Underline regenerates the disused metro tunnels and surplus infrastructure around London. These spaces would be turned into a network of pedestrian and cycle paths with cultural and retail spaces, all powered by Pavegen. This kinetic energy system converts footsteps into electricity. The London Underline embraces the city’s acceptance of alternative transport and growing urban curiosity, offering London the first citywide network of its kind. Momentum Transport Planning and Pavegen consulted on Gensler’s design.

Ian Mulcahey, co-director of Gensler London, says “Now that London has reached the highest level of population in its history we need to think creatively about how to maximize the potential of our infrastructure. The adaptation of surplus and underutilized tube and rail tunnels could provide a quick and simple addition to our infrastructure network.”

With current pressures on London to cope with future transport capacity for pedestrians, cyclists and tube users, London is in desperate need for new types of public and community space, as well as affordable retail, commerce and entertainment spaces. Subterranean spaces present an excellent option for new uses.

Gensler designer Trevor To explains, “Gensler’s proposal brings back an ignored part of the city through the collective efforts of its citizens. By harnessing the kinetic energy of every one’s footsteps, a whole new urban space is unlocked underneath the city. This self-sustaining approach to urban infrastructure is key to a carbon-neutral community, and London could lead the world once again in merging tradition with innovation to create a better future.”

The electrical supply to support this underground park would be generated from foot traffic at a transit station such as Charing Cross or Holborn. Dubbed “Boris’ Bike Underground,” The London Underground would also offer new sites for pop-up businesses, exhibitions, retail and event space.

Underneath the whole of London is an untapped surplus of disused space in subterranean infrastructure – tube tunnels, exchanges, stations, and reservoir chambers. We envisage, through the emergence of kinetic energy technology, London’s acceptance of alternative transport, and Londoners’ insatiable urban curiosity, that a dynamic new network of pedestrian and cycle links across all boroughs could be made by regenerating this existing infrastructure.