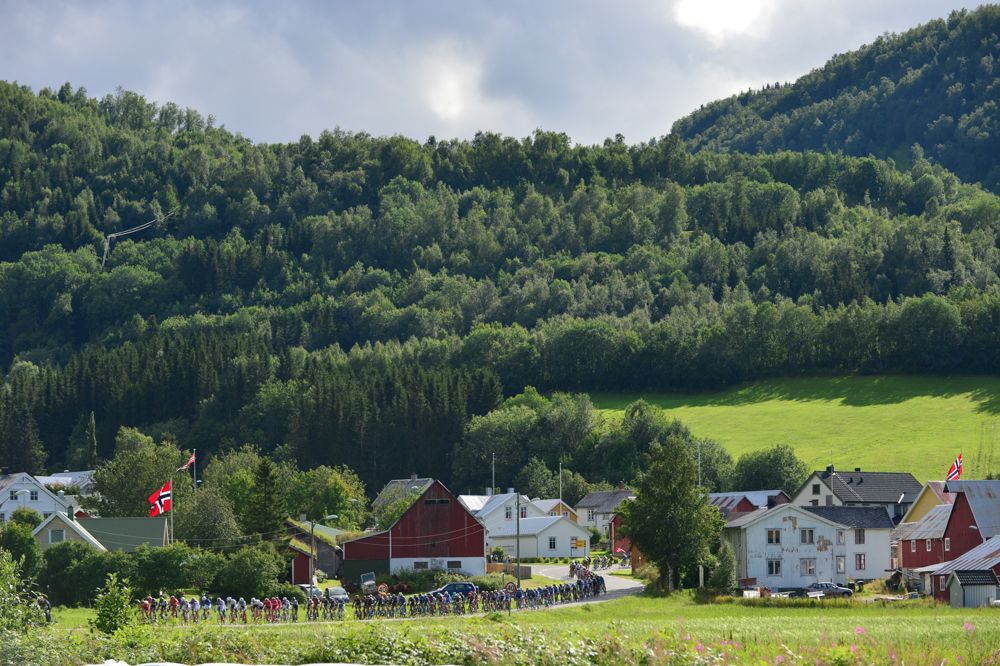 One year after he claimed his first ever stage victory at the Arctic Race of Norway in Harstad, Alexander Kristoff took his ninth win of the 2016 season to make it up for the narrow misses in the last week of the Tour de France (2nd in stages 14 and 16, 3rd on the Champs-Elysées). Without a train, he managed to outsprint John Degenkolb and the rest of the survivors of the first category climb located with 18.5km to go. The Norwegian from Katusha will start stage 2 with the blue and orange jersey like in 2015, with an advantage of three seconds ahead of Gregory Rast who collected time bonus throughout the long breakaway of the day.

Seven riders in the lead from the start

After 50km of racing, their advantage was 6.25 over the peloton mostly led by Katusha with the help of one FDJ rider. Rast won the first intermediate sprint in Bodø ahead of Hagen and Cam.

Rast also won the second intermediate sprint with 44km to go while the time difference was reduced by the peloton to 4.15.

It went down to 2.10 with 25km to go when the rain became a decisive factor and Rast and Schillinger dropped their breakaway companions in the first category climb of Ljøsenhammeren.

Alone at the top, Schillinger won one year’s worth of salmon products – given by Flakstadvåg Laks. BMC was very active in bringing the peloton across before Trek-Segafredo took over with Italian champion Giacomo Nizzolo putting himself at the service of Niccolo Bonfazio.

Among the top sprinters who survived the climb, Arnaud Démare was the one who suffered the difficult racing condition.

The Frenchman was caught in a split 7km before the finish while Kristoff was deprived of a few of his team-mates.

Attacker Amund Groendahl Jansen of Joker-Byggtorget was first to rejoin Schillinger with 4.5km to go but only a few seconds before the bunch was packed again.

Giant-Alpecin set up the sprint for Degenkolb but Kristoff passed him at the very end despite being isolated. Degenkolb’s high cadence in the last 100 metres evidenced a mechanical problem. Danny van Poppel of Team Sky took third place in Rognan.