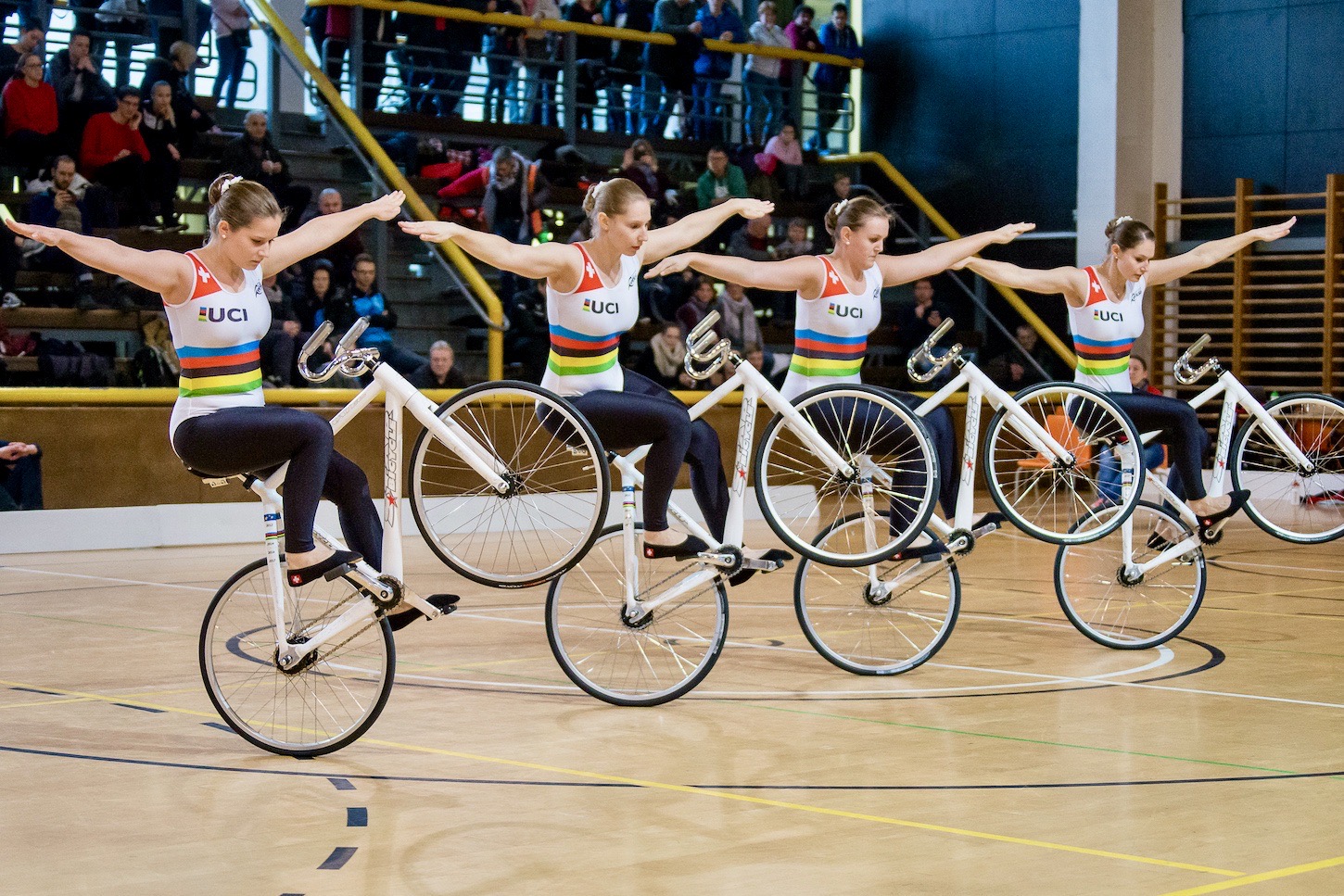 Fifteen months after the last round of the UCI Artistic Cycling World Cup, the 2021 edition kick starts in Uzwil (Switzerland) this weekend.

The Austrian town of Koblach hosted a round of the 2020 UCI World Cup at the end of February last year before the Covid-19 pandemic led to the cancellation of the remaining rounds and the postponement – by a year – of the 2020 UCI Indoor Cycling World Championships in Stuttgart (Germany).

Anticipation is therefore all the higher as athletes prepare for their first high-level international confrontation in many months.

Reigning Single Men UCI World Champion Lukas Kohl (Kirchehrenbach / GER) will be present but acknowledges: “The difficulty is that it is a competition that involves a lot. There was no test competition. We’ll start with a highlight.”

The artistic cyclists have not gone entirely without competition: last year Indoor Cycling World Wide – which helps promote and develop indoor cycling – organised online competitions, broadcast from sports halls via webcam and evaluated online by the judges. Kohl was the almost unbeaten king of this new format.

Six nations will be represented in Uzwil: Germany (14 starts), Switzerland (7), Austria (4) as well as France, Japan and Spain (1 each). The athletes competing for Japan (Kosuke Shibayama) and Spain (Daniel Andres Hecktor) are both based in Germany.

Once again, the German Cycling Federation has the largest delegation, and is the clear favourite for wins and podiums in the individual and pairs competitions. In Single Men, alongside Kohl, his runner-up at the UCI World Championships Marcel Jüngling (Dornheim) and Max Maute (Tailfingen) are clearly targeting the podium, with starting values more than 100 points higher than those of the trio from Spain, Japan and Switzerland.

It’s a similar picture for the Single Women, where UCI World Champion Milena Slupina (Bernlohe / GER, with a starting value of 202.80) holds the pole position ahead of Maren Haase (Hoffnungsthal / GER – 196.20) and Mattea Eckstein (Stuttgart / GER – 193.70). The Swiss pursuers, Saskia Schäffler (Dürnten – 167.70) and Romina Ledergerber (Schaffhausen – 157.20) are still in the race for the medals.

There are exciting duels expected in the pairs competitions. Sophie-Marie Wöhrle and Caroline Wurth (Gutach / GER) are aiming for the Pair Women number one spot, but there is tough competition from Helen Vordermeier and Selina Marquardt (Stuttgart) who are only slightly behind with their starting value.

In the Pair Open class there are four couples on the start list. The two top German duos Max Hanselmann and Serafin Schefold (Öhringen), and Patrick Tisch and Nina Stapf (Magstadt / Denkendorf) have new difficulties in the programme and are only a few points apart.

The ACT4 (teams of four) is the only category in which the two teams at the top are not from Germany. Host Uzwil sends Stefanie Haas, Valerie Unternährer, Selina Niedermann and Sarah Manser into the competition as a top-ranked quartet with a wildcard. Rheineck / Uzwil (Switzerland), RSV Steinhöring and VfH Worms (both GER) and Baar (SUI) will all go for victory on the day.

After the cancellation of rounds of the 2021 UCI Artistic Cycling World Cup in Komarno (Slovakia) and Hong Kong, the UCI is working to find another venue and date for this summer before the Final in Albstadt (Germany) on October 23.

The UCI Artistic Cycling World Cup from Uzwil will be streamed live (details here) with the action starting at 4.30pm on Saturday June 19.