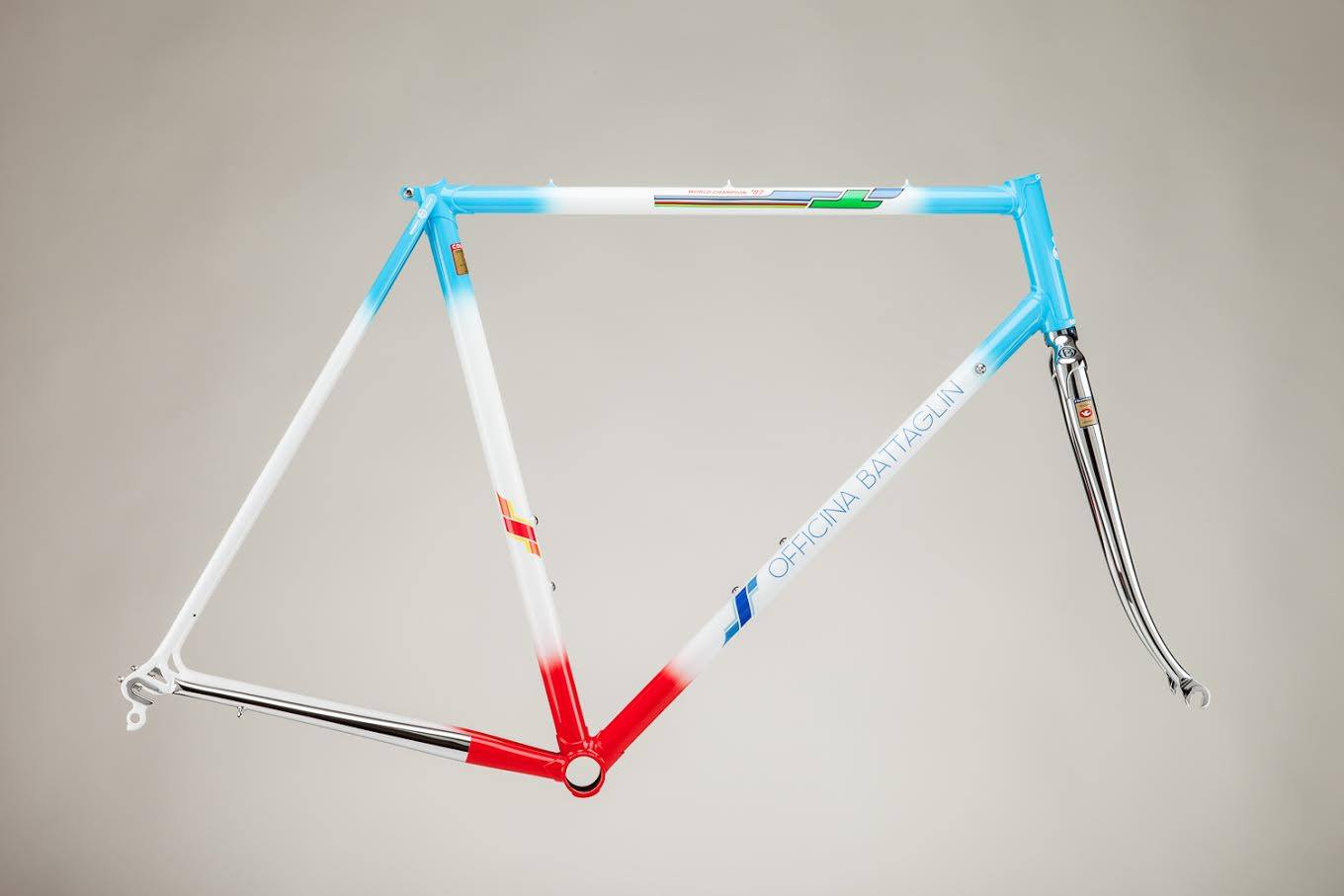 10 May 2017
By Lord Velo - In FEATURED ARTICLES, LATEST ARTICLES, THE DOUBLE DIAMOND

According to Battaglin, only 187 of these glorious handmade frames will be available, which will feature the same venerable Columbus SLX double butted, helical reinforced tubeset, chromed chain stays, classic dropouts, threaded bottom bracket and chromed, steel lugged fork as the original bike ridden by Roche.

“Custom built at Giovanni Battaglin’s workshop in Marostica, North East Italy, the bike was developed by the same ex-rider who had achieved the Giro-Vuelta double six years before. It was probably the most advanced racing machine on the market, featuring the best equipment available at the time,” says Battaglin.

After nearly 7 hours of racing, the rain that had been falling steadily on the circuit since the morning stopped.

The crowd of spectators that had gathered to witness the event now had the chance to see clearly the most talented riders in the world engaging in the battle for the rainbow jersey.

The stakes were high, but until that moment the race hadn’t been so exciting. Just a few attacks, none of them decisive enough to mark a turning point.

Going into the climb at the beginning of the last lap, the Irish rider Stephen Roche attacked. Sean Kelly, the other star wearing the green jersey, stayed on his wheel. Their team had performed an excellent work.

The action split the group. The riders in the front got rid of most of the competitors, and only 14 racers were left. At this point, there was no other choice to chase the victory but trying to escape.

The Dutch Van Vliet got away. The German Golz followed him. Roche closed the break, and so did Sorensen and Winterberg.

The group of 5 established a small gap, while the riders behind didn’t react. It seemed like they were expecting for Moreno Argentin, the defending World Champion, to chase them down.

Italy was the peloton’s strongest team, and everyone considered Argentin the race favorite.

But the gap widened.

Four hundred meters from the finish line, Roche launched his attack. There was a narrow space between Sorensen and the barriers on the left side of the road. Roche daringly threw himself right there.

While he was approaching, Sorensen inadvertently moved to the left, shutting down that space Roche had chosen to be his way to the finish line.

The chances for the Irish to pass between Sorensen and the barriers were reducing at every pedal stroke.

But when Sorensen and Roche seemed so close that the action could a massive crash, the Danish moved to the right and Roche was out into the open.

He pedaled as hard as he could. This time Argentin responded, but it was too late.

Sprinting certainly wasn’t Roche’s secret weapon. He would have probably lost every time he’d found himself in a sprint with Golz and Van Vliet. Not that day.

If you’re a passionate cyclist who started out in the 1980s, there’s a good chance you remember 1987 as Stephen Roche’s magic year.

In 1987, the Irish rider won the Giro d’Italia, a tough edition of the Tour de France, and the World Championships.

Before Stephen Roche, only Eddy Merckx had managed to win the “Triple Crown” of professional cycling. After Roche, nobody was able to do it again.

By winning the world’s most coveted Grand-Tours, he had shown that he felt at ease riding the major stage races. But what happened in Villach on 6th September was far from everyone’s expectations.

A legend built in Northern Italy

In 1987, Roche was riding a Battaglin bike, which quickly became the icon of professional cycling’s greatest success.

Custom built at Giovanni Battaglin’s workshop in Marostica, North-East of Italy, the bike was developed by the same ex-rider who had achieved the Giro-Vuelta double six years before.

It was probably the most advanced racing machine on the market, featuring the best equipment available at the time.

At Officina Battaglin, we have gone back to building exclusive steel frames using the same process and tooling of 30 years ago. That’s why we’ve decided to mark the 30th anniversary of Stephen Roche’s Triple Crown with 1987.