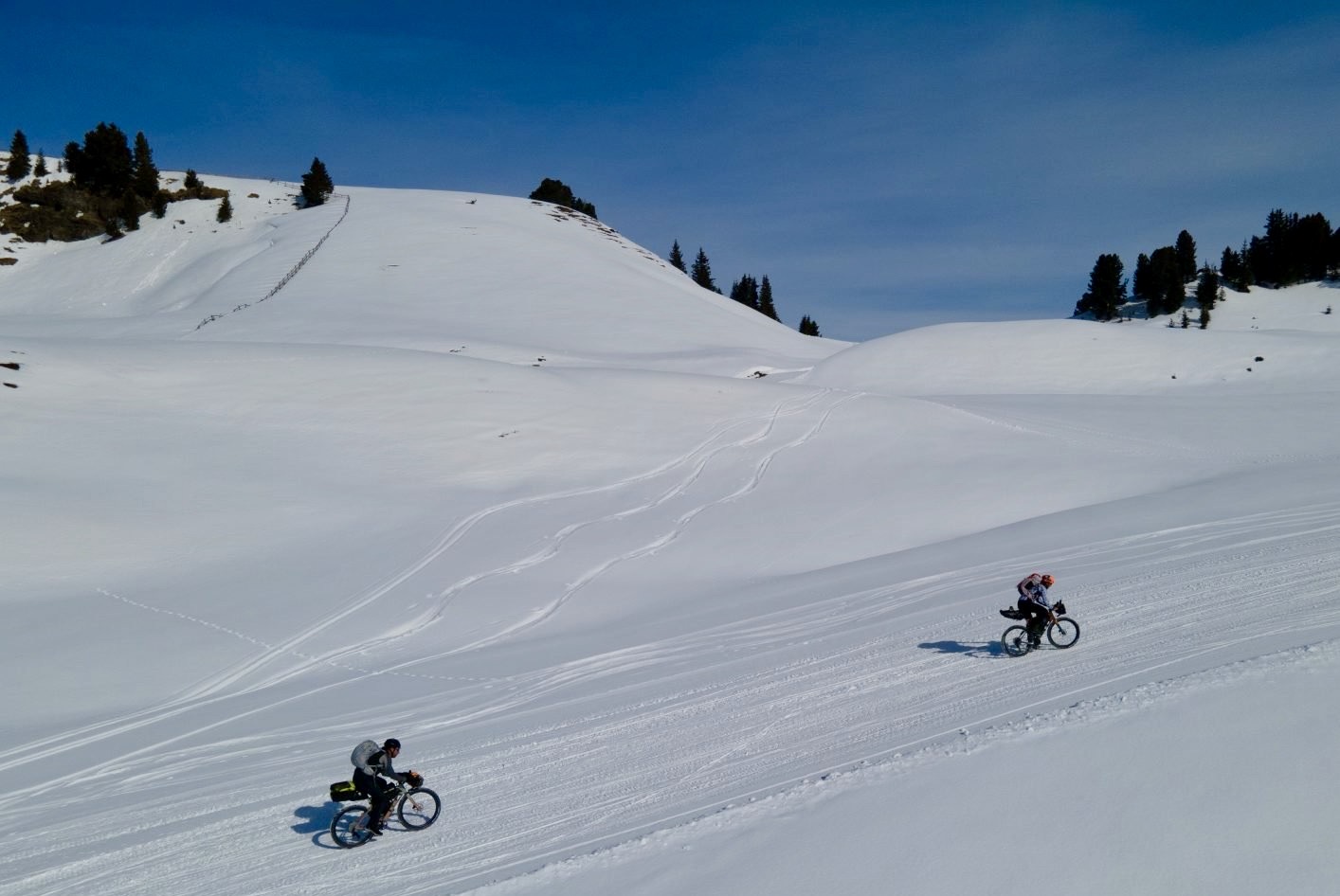 In the middle of February during some of the coldest days of winter three cyclists, passionate about snow and mountains, ventured unsupported around the Sassolungo and the ski slopes of the Dolomiti Superski area. Deserted because of the lockdown in force, they had the entire winter playground all to themselves

“I live in Val di Tires, on a farm at the foot of the western slope of the Catinaccio. I like it here. I like the mountain; its presence, its physicality, so pervasive in nature that it almost feels as though it is inside the house. The mountain is so big and the house so small that at times, I am surprised it has not engulfed us entirely. Vertical dolomite walls enclose the upper half of the window. On the lower half, the valley narrows right at the confluence of two streams while a slice of wood enters from the corner on the right,” says Alberto Frizzero.

“I work in a bike shop in the center of Bolzano. For 8 months a year, I travel by bike exclusively. I ride it to work in the morning, and within half an hour, I am at the shop. At the end of the day, I get back on my bike, and in just over 1 hour, I’m back home. The remaining months are those of ice and snow, which make the asphalt road too dangerous for cyclists.”

“It was the snowiest winter the Dolomites had recorded in years, as well as the most desolate due to the sudden appearance of Covid. The ski lifts and hotels are closed and there are no people around. I stand in this barren ghost town as I speak on the phone with Edi and Carlo of 3T. I have recently received the new RaceMax, and I fantasize about a multi-day trip on the snow.”

“Tires is – as you already know – at the foot of the Catinaccio group, and its position closes the valley to the north-east as though it is a wall. Above the town, at an average altitude of 2400mt, extends the Altopiano dello Sciliar. This slopes north towards the Alpe di Siusi – one of the most idyllic hiking areas in the Dolomites – towards Sassopiatto and Sassolungo, the mountain symbol of Val Gardena. I know this territory inside out. I spread the map on the kitchen floor, and as per usual Timo attempted to sprawl himself out upon it. I scratch behind his triangular fluffy ears with one hand and draw an outline of a potential route. Monte Pana, Comici Refuge, Passo Sella, Canazei, Val di Fassa, Passo Costalunga, Latemar and Lake Carezza, Tiers.”

You read can read about the full bikepacking adventure in the Dolomites here.