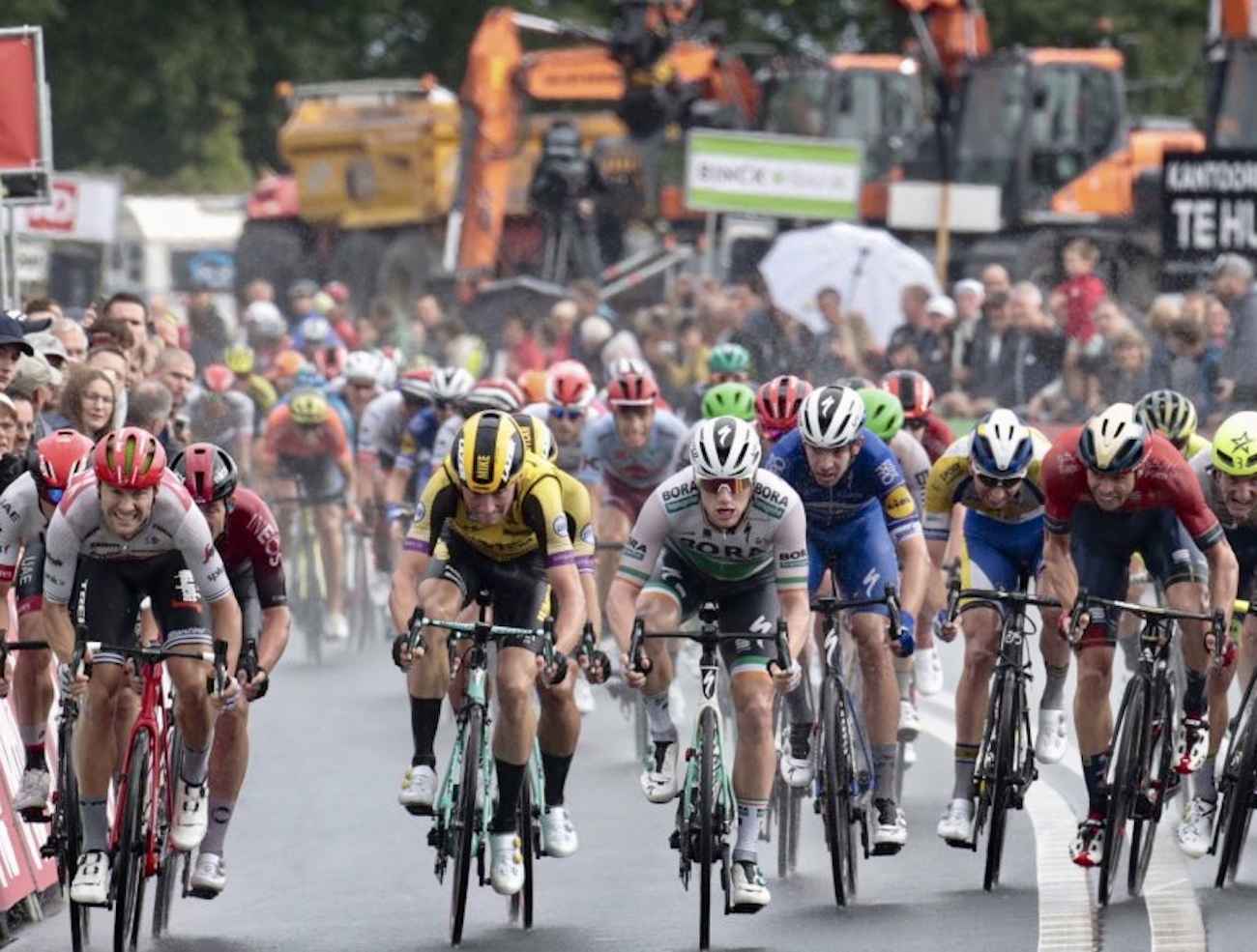 The stage concluded with a bunch sprint, with Theuns leading the way, but he was caught by a great move around the outside by Bennett.

Earlier in the race, Baptiste Planckaert took first place twice at the Super 8 Checkpoint Sprints, claiming the beige leader’s jersey in the Checkpoint classification; and in the Golden Kilometer Lukasz Wisniowski took two first places and one second place in the triple intermediate sprint.

I’m really happy,” said Bennett after the stage. “It’s my first win in this [national champion’s] jersey and I’m happy that it’s come sooner rather than later. I’m delighted.

“It was pretty dangerous. I was just trying to keep up front. The guys did a good job keeping me there and I kept in a good position in the last 2km and just tried to hold on to the bigger trains. I just tried to stay out of trouble really.

“To be honest, I was nervous with the rain, I had a few skids in the race. But it was good, I can’t complain.”

The peloton took the start in Beveren in sunny conditions. From the official start the riders set a searing pace, which meant it would take a long time for a breakaway to get away. After sixty kilometres Baptiste Planckaert, Lars Ytting Bak, Lukasz Wisniowski and Aaron Verwilst finally managed to break free and gather a maximum advantage of almost three minutes.

While the riders didn’t have to cope with the usual heavy winds in the area, they were less fortunate with the rain. The sun made way for dark clouds when the riders reached the local loop, rendering the roads very slippery. A mass crash on the cobbles of cut the peloton into four groups with the likes of Arnaud Demare and Bob Jungels having to chase. Eventually the entire pack was reunited.

At the head of the race Baptiste Planckaert took first place twice at the Super 8 Checkpoint Sprints, claiming the beige leader’s jersey in the Checkpoint classification. In the Golden Kilometre Lukasz Wisniowski took two first places and one second place in the triple intermediate sprint, gaining eight bonification seconds. It would prove to be the last milestone for the breakaway, which was caught with 2.5 kilometers to go.

A bunch sprint was inevitable, with a great lead-out for Belgian Edward Theuns. He started sprinting in a perfect position, but was caught by a great move around the outside by Sam Bennett. The Irish champion comfortable won the first stage and thus became the first leader of this edition of the BinckBank Tour.