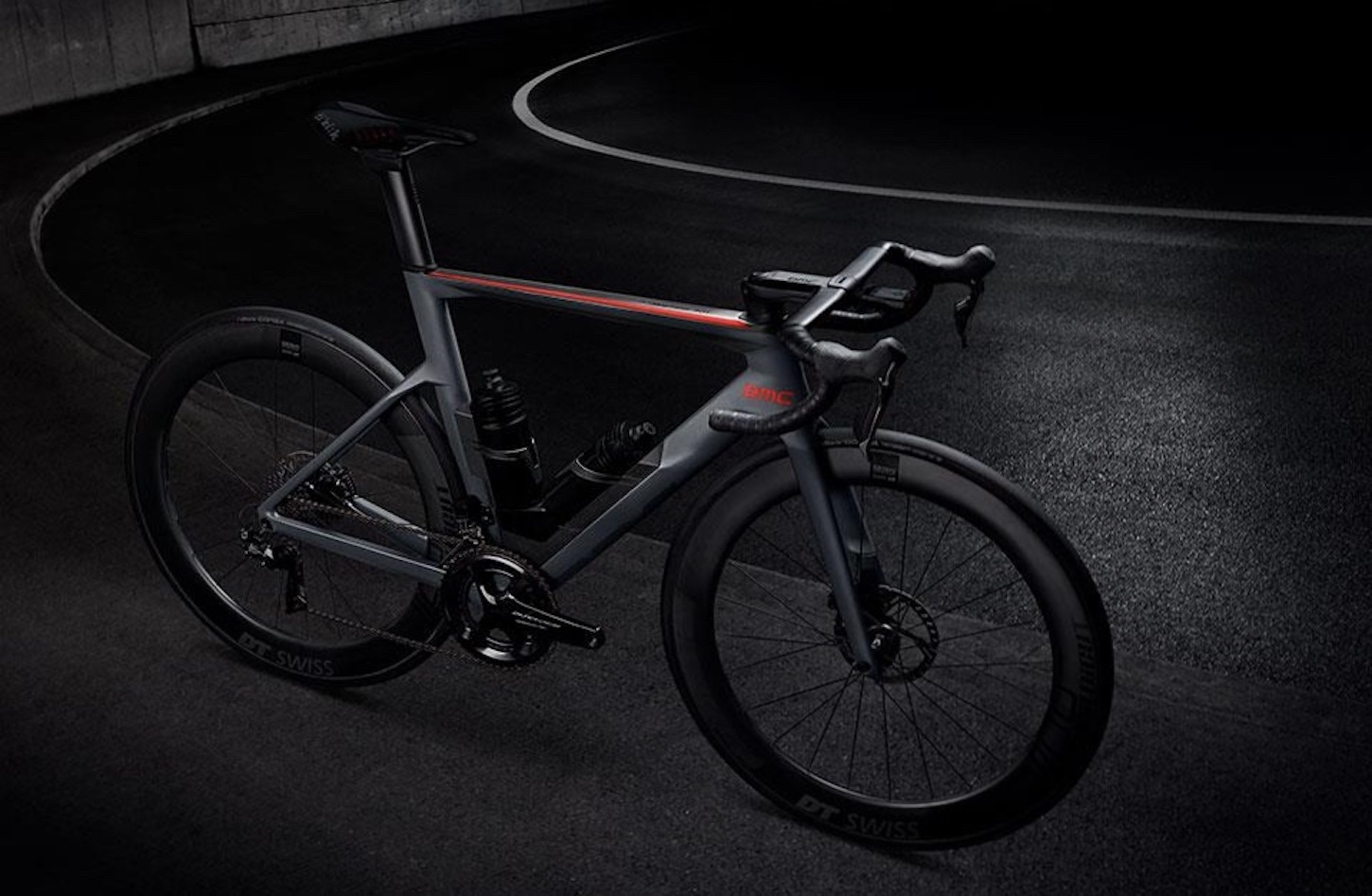 In the end, BMC claims all of this resulted in a frame that tips the scales at an impressive 980g in a size 54, while the beefed-up aero fork weighs in at 410g.

Internal cable routing and an integrated Garmin or GoPro mount that interfaces directly with the stem’s faceplate, further adds to the stealth quotient of the Timemachine Road.

But, perhaps the most striking feature about the Timemachine Road is the new Aero Module, which entails two bottle cages that have been integrated into both the downtube and seattube, along with a neatly concealed storage box tucked between them – a page taken right out of the triathlon bike handbook.

However, riders can opt to remove the Aero Module, and instead use standard bottle carriers, especially in situations where sanctioning rules in races prohibit their use (think cycling’s governing body the UCI).

In order to compensate for the added braking force of 160mm front disc brakes, BMC employed its Tuned Compliance Concept (TCC) Speed technology to create a new asymmetrical fork that bolsters compliance while also combating unwanted feedback from the road, along with a unique Integrated Aero Cover that conceals the brake caliper.

Other features that highlight the Timemachine Road are BMC’s modular internal cable management, a Di2 junction box that’s also integrated into the downtube, a proprietary interlocking headset/spacer system, a dedicated aero seatpost and a PF86 bottom bracket, while increasing tire clearance up to 28mm.

BMC says, the Timemachine Road is available as either a frameset only (includes frame, fork, ICS bar and stem, Aero Module, seatpost and saddle), or as a complete bike with three different “builds” from Shimano and SRAM including Dura-Ace and Ultegra Di2 and Red eTap, along with DT Swiss ARC 1100 and 1400 tubeless wheelsets.

You can learn about pricing and availability for the new Timemachine Road by visiting BMC’s website here.

You’re not looking for an ordinary race bike. You are looking for the fastest road bike ever. One that is your instrument to tear away from the pack. For beating the clock, beating the competition, or simply beating your best in style. The poise and prowess of the Timemachine ROAD give it impetus in breakaways, rolling terrain, and bunch sprints. Inspired by all things fast, the Timemachine Road exudes speed and technology. A pure breed of sculptured design and stealthy engineering, the Timemachine Road stakes ownership of the tarmac with overarching aero integration for WorldTour-winning speeds. Aerodynamically perfected shapes, class-leading integration of the ICS Aero cockpit and the all-new Aero Module that turns hydration and storage requirements into an aerodynamic advantage; these are our key innovations to help the rider push through and keep up with the charging machine below for that bit longer. You’re not an ordinary rider and this bike is anything but ordinary. Timemachine Road, enter a new era of speed.