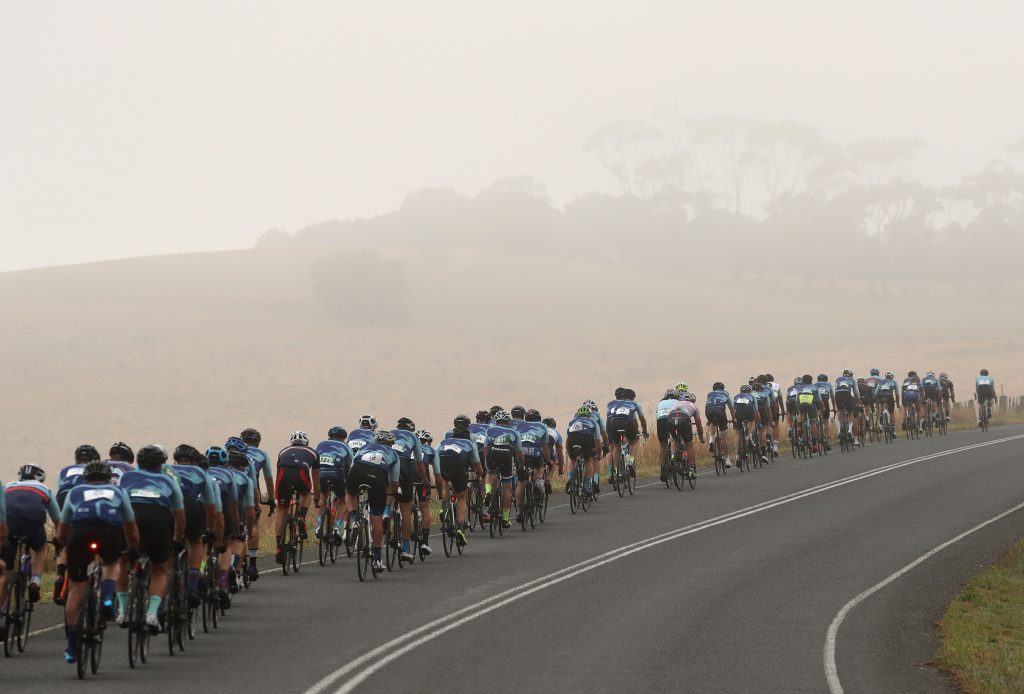 The 27-year-old, who has represented Australia at junior and then senior levels since 2007, won the 113km race in a sprint finish.

A favourite to win the race after taking out stage 4 of the Santos Tour Down Under, Hoskings said: “It’s the first race I’ve targeted and won. I was really nervous I’d get jumped from behind, but I tried to channel Caleb Ewan and put my head down low.”

“I worked really hard over the off season, and it’s a nice stepping stone to show I am going in the right direction,” she said.

Two-time Australian road race champion, Elvin added: “It’s one of those races where anything can happen. With the Challambra Climb and the heat – it made a big difference to the group.

“Chloe got the jump on me and she’s arguably the world’s best sprinter, so I’m really happy to get second.”

Riders enjoyed calm, but hot conditions after setting out from the Geelong Waterfront at 11.20am. Georgia Whitehouse (Sydney Uni – Staminade) went off the front in the early-stages but a rear puncture with 72km to go saw Italian Lisa Morzenti (BePink) pass her. The pair joined and remained in a leading breakaway along the coast getting out to a three-minute lead.

The 15 teams then began organising themselves as tension built on the outskirts of Geelong. Mitchelton-SCOTT set the pace using cross-winds to their advantage.

The race was action-packed with three crashes including Alison Jackson (Team TIBCO-Silicon Valley Bank) falling heavily during the sprint finish. Earlier in the day, Dutch rider Roxane Knetemann (Alé – Cipollini) suffered a short loss of consciousness before being transported to hospital in a stable condition.

“With the race being elevated to UCI 1.1 classification this year, the crowds around Geelong and the Surf Coast region were certainly treated to a display of the best in the business.

“The skill, endurance and attitude of these athletes was truly inspirational.”

Cadel Evans said the accolade for the best under 25 male and female rider in the road races recognises the contribution the Melbourne businessman has made to cycling.

“I’m thankful to have the award named after me,” Ryan said. “All I’ve ever wanted to try and do, whether in business or sport, is to make a difference.”

Evans, who cycled the 115km course, said the ride was his most important – and enjoyable – ride of the year.

“Today had its challenges and ultimate rewards – Challambra, in the long course, was one of them,” he said.

“Everyone who made it up the climb today is to be congratulated. And, if you didn’t quite get there – there’s always tomorrow before the Men’s Race!”

The public is invited to ride the 830 metre Challambra Climb between 12 – 1pm tomorrow when the road will be closed for the Elite Men’s race. Riders can take advantage of conquering the segment in ‘race mode’ and pass under the official Subaru King of the Mountain arch.

Managing Director of Swisse Wellness Oliver Horn extended his congratulations to everyone who participated in the Swisse People’s Ride.

“Today was a fantastic morning to bring everyone together to celebrate good health and happiness. Being able to participate in an event that celebrates the benefits of being active, healthy and happy, makes us very proud as a brand,” he said.

“It was great to see everyone test themselves on the bike, enjoy the company of the thousands of cycling enthusiasts and soak in the views of the Great Ocean Road.”