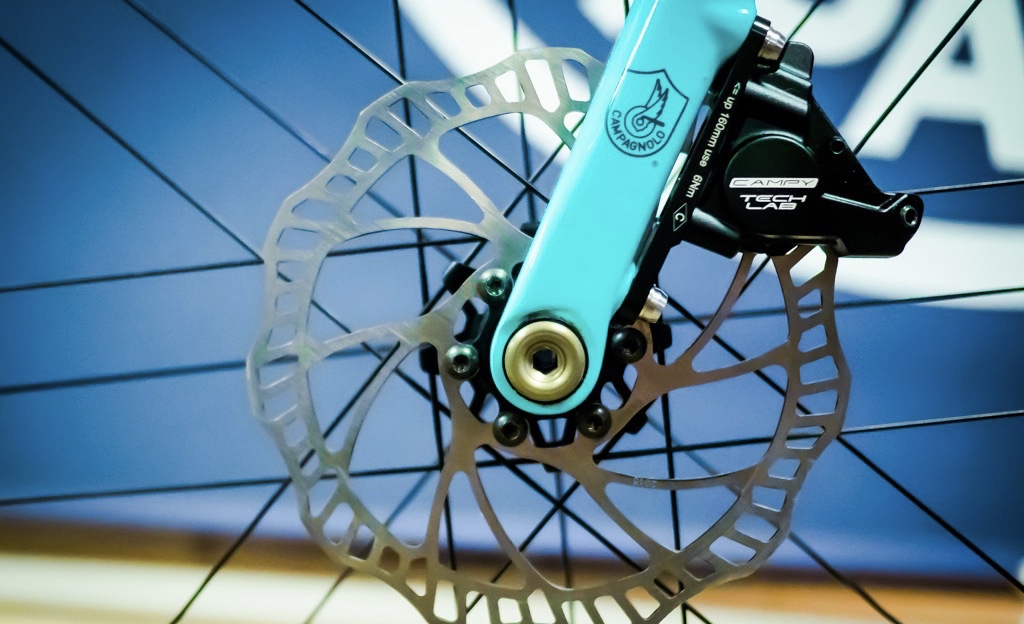 In addition to unveiling its new Potenza groupset at a press camp in Gran Canaria today, Campagnolo also teased the cycling masses with glimpses of its prototype disc brake system.

Taking their usual tacit-turn approach to prototype products, Campagnolo was cautious not to reveal too much detail about their new disc braking system. Rather they simple chose to roll-out a few bikes donning the new braking system – to whet everyone’s appetite.

Indeed, Campagnolo’s press director, Joshua Riddle was reluctant to provide any details, instead teasing the audience with glimpses of the prototype disc brakes under the guise of the Italian brand’s Campy Tech Lab logo.

This much could be gleaned however.

The bikes on display featured a two-piston design with a two-piece body construction, thus giving clue that there’s a piston on both sides of the rotor which is actuated upon braking. In addition, the system appears to be available in both a flat mount and standard mount version, with bleeding being carried out via a removable threaded screw, while the hoses attach to the caliper with a threaded fitting, similar to what’s found on Shimano’s system.

Additionally, the master cylinder appears to be integrated into the brake lever, which features a brake hood that’s noticeably taller and wider in comparison to either mechanical or EPS Super Record. Furthermore, the lever blades themselves appear to be the same as Campagnolo’s current ErgoPower levers. However, one feature that is different, this the shift paddle behind the brake lever on the EPS version, appears to be hollowed out. Perhaps, this is done in the interest of saving weight?

According to one member of Campagnolo’s Tech Lab, the brake systems for both the mechanical and electronic versions are about 90% complete. However, no potential release date was given.