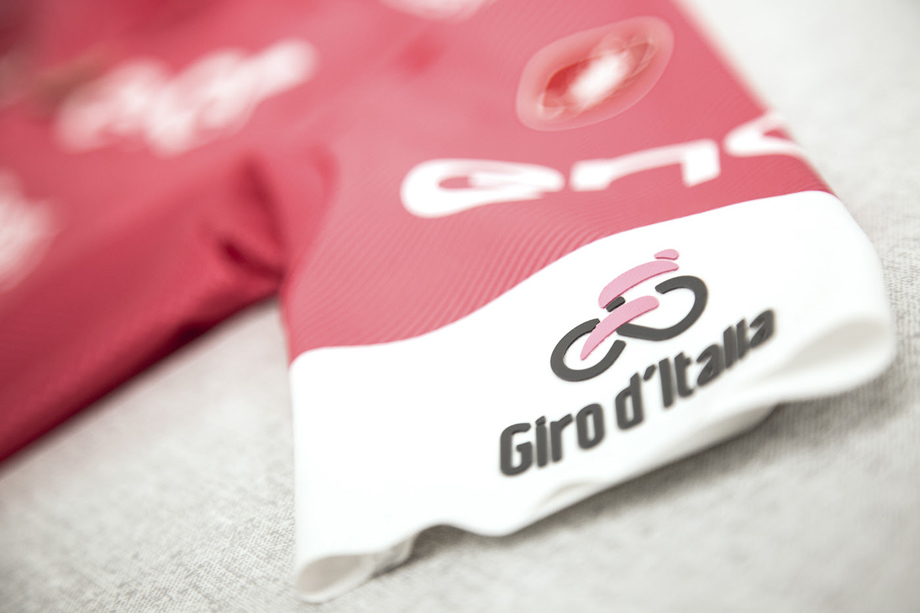 Alongside RCS Sport, organizers for the Giro d’Italia, Castelli unveiled the jerseys for this year’s Italian Grand Tour during the start of this year’s Milan Fashion Week.

Paolo Bellino, RCS Sport managing director commented, “the return of such a prestigious and internationally popular brand like Castelli at the Giro talia makes us very happy and highlights once again the global appeal of the race.”

“On the new wonderful jerseys we will showcase prestigious brands such as Enel, Segafredo, Banca Mediolanum and Eurospin, our partners for a number of years and an important part of our project. We would also like to thank them, and I would like to mention TAG Heuer, the Giro’s Official Timekeeper, who, since last year is our companion in the national and international scene and who today, in this amazing location, has provided the countdown to the 101th Giro.”

The Giro leader’s jersey was produced by Castelli in the past and was worn by many champions, beginning with Giovanni Battaglin, the victor in 1981, to include Miguel Indurain, who won the race in 1992.

In between, the jersey graced the shoulders of Giuseppe Saronni, Bernard Hinault, Francesco Moser and Giani Bugno, to name just a few.

Steve Smith, Castelli brand manager, said: “It’s not just a jersey; it is a highly cherished object that represents the ultimate goal for a cyclist in Italy and in the world. And it’s not just fabric; it is a symbol of the sweat that is required to win it, and it is an honor that elevates the lowliest of riders, even just for a day.”

“This is why we wanted to pay tribute to the Giro and its champions with something truly unparalleled. We have created special jerseys featuring details that enhance them and make them unique: subtle references scattered along the fabric like treasures for cycling lovers and fans of the Giro to discover, from a very special zipper featuring the symbol of the never-ending trophy to the relief print of the name of the classification that the jersey represents.”

Along with the maglia rosa (pink jersey), Castelli has also created the blue, cyclamen and white jerseys for the leaders in the mountains, points and young rider classifications.

“Castelli has added a new chapter to the brand’s long history, which began in 1876 and has always been linked to the champions of the Giro d’Italia, the toughest race in the world’s most beautiful place.”

The 2018 Giro d’Italia will take place over May 4-25. Tom Dumoulin (Team Sunweb) wore the last maglia rosa during the 2017 race to claim his first Grand Tour victory.