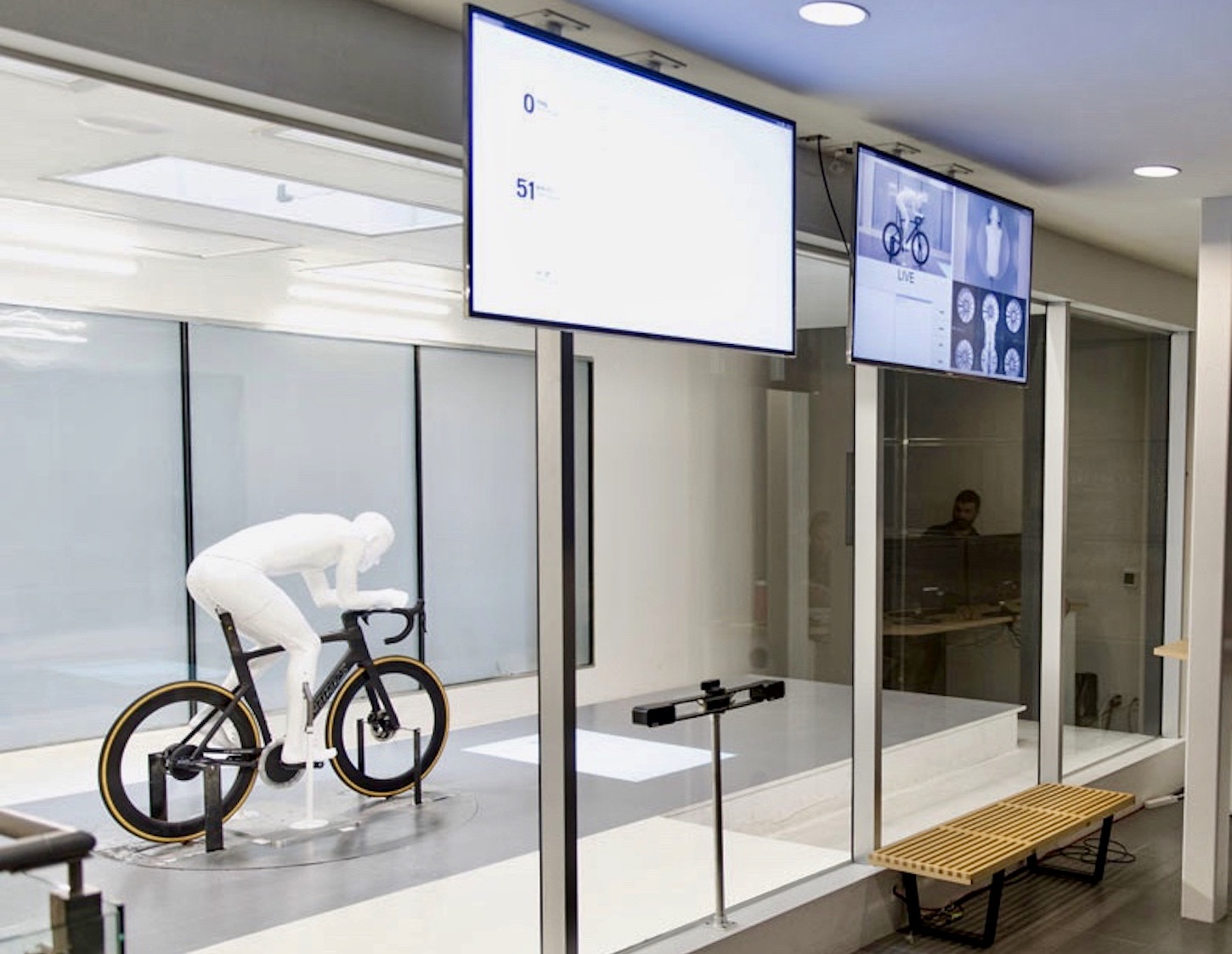 If being the most sophisticated “chainless” road bike design to date isn’t enough, CeramicSpeed is now claiming its DrivEn is the world’s most aerodynamic.

Since the launch of the prototype version last year, CeramicSpeed has partnered with Specialized to develop a new version of the bike based on the brand’s Venge model, which is now simply spelled Driven.

According to Specialized, the Driven “showed an aerodynamic improvement over the current day Venge of approximately 3 percent consistently across all yaw angles in the wind tunnel, a saving which could amount to “as much as 8 seconds over 40km” in the real world.”

Specialized aerodynamics director Ingar Jungnickel notes that this is an advantage comparable to that of the current S-Works Venge over the old Venge ViAS.

In addition to the double raised chainstay that’s needed to accommodate the Driven’s drive shaft, there are other interesting features to the bike such as an aerodynamic shroud to conceal the rear bearing assembly and a modified version of Specilaized’s own S-Works Power crankset.

CeramicSpeed’s Martin Banke says the Driven is the result of extensive development over the last 10 months, which have resulted in real-world “rideability and shiftability” during tests on a velodrome at speeds in excess of 27mph, leading enthusiasts to think that the Driven may one day become a production bike.

“Since unveiling Driven in 2018—a revolutionary drivetrain concept which eliminates the chain and derailleurs—we’ve taken several major steps to further the development”.

“We recently joined forces with bicycle giant Specialized in a collaboration to put the chainless system through its aero-paces”.

“To date, the Venge is Specialized’s most aerodynamic road bike, with every aspect of its design challenged and tested. Continually striving to set new benchmarks, the engineers at Specialized opened the door to us with an interest to examine the true potential of Driven and the aero gains that could be achieved with such a radical drivetrain,” adds Banke.

Chris Yu of Specialized spoke of the importance for companies to seek innovation in cycling, “our motto at Specialized is “Innovate or Die.” This means we are constantly looking at new concepts that offer true performance benefits for our riders. Significant innovations in drivetrains don’t come around often, so we were eager to test the aero performance of Driven in our Win Tunnel.”

“Driven, an innovative pinion-drive-shaft design, that utilizes 21 CeramicSpeed Bearings, was custom designed for the experiment by our R&D lab based in Boulder and led by Chief Technology Officer Jason Smith. Driven was then retrofitted to a Venge for the tests, pitting it against a standard Venge in the renowned Win Tunnel at Specialized’s Morgan Hill campus.”

“After hours in the tunnel, the results reveal that the Driven equipped Venge is the most aerodynamic road bike ever tested in the Win Tunnel,” claims Yu.

“In pursuit of the 1% drivetrain, the Product Engineering and Design team’s focus was to achieve the utmost level of mechanical efficiency, yet aerodynamic efficiency was always in the back of our mind. During the early phases of development, it became clear that Driven might turn out to be the most aerodynamically efficient drivetrain. But speculation means nothing without quantitative testing. Thanks to the rigorous aero testing at Specialized’s Win Tunnel, it has been proven that significant aerodynamic gains can be captured with Driven. It is quite an incredible R&D accomplishment to achieve the most efficient bicycle drivetrain ever developed…both mechanically and aerodynamically”, says Specialized’s Lead Engineer and CTO, Jason Smith.

While the Driven currently remains a concept, the Win Tunnel results are thought-provoking, with a few unanswered questions remaining about rideability, shifting and the future of drivetrains.

“Since we launched Driven at Eurobike last year, rideability and shiftability has been our primary R&D focus and we have made incredible advancements in only 10 months. We’ve surpassed a speed of 45 km/h during rider load testing at the velodrome, and have had major breakthroughs in a shifting mechanism that we’re excited to unveil in due course. We’re now looking forward to showcasing how Driven and the developments we’ve made can truly shift the future of bicycle drivetrains,” explains Banke.