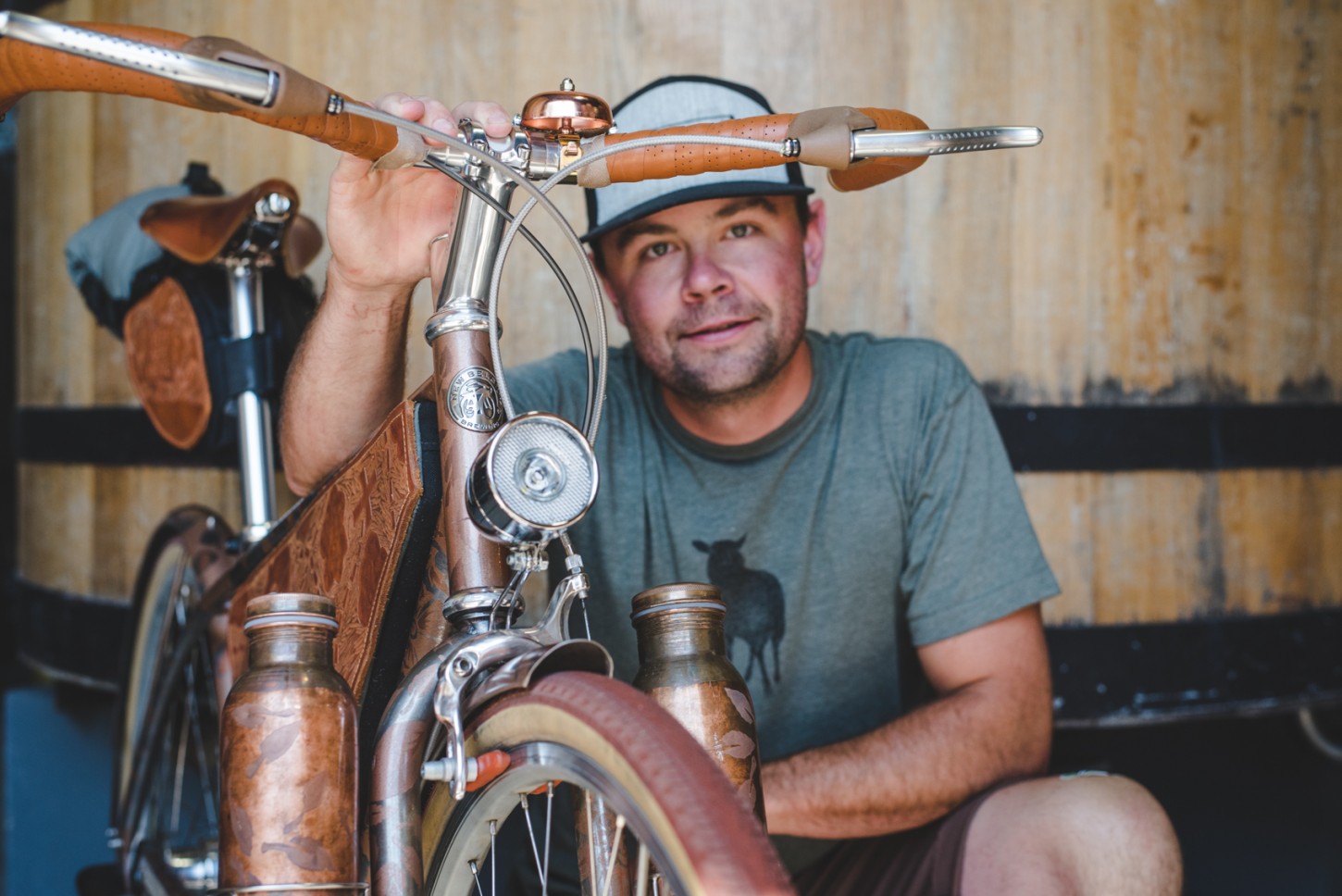 Brinkley Messick’s custom paint and leather designs on a New Belgium/Detroit Bikes cruiser captured the western spirit and gained love and appreciation from fans, making him the winner of New Belgium’s Art Bike competition. Brinkley is one of twelve artists who competed against one another for the opportunity to award $5,000 to their charity of choice. His bike is now destined to be displayed at New Belgium’s new brewery in Asheville, NC.

To compete, the artists each received an unpainted New Belgium/Detroit Bikes cruiser to use as a blank canvas. The artists then turned the bikes into functional pieces of art. After about two months of working on the bikes, and one month of voting, Brinkley came out on top.

“There were so many amazing, over-the-top creative entries that we knew it would be a tough competition,” said Meredith Giske, New Belgium’s National Field Marketing Director. “Brinkley’s detailed designs make you do a double take. It is truly hand-tooled plus his use of Colorado and North Carolina imagery really struck home for us. In the end, the people cast their vote and Brink came out on top.”

Brinkley chose Outdoor Alliance, an organization that works to protect and promote access to public lands, as the organization to receive his $5,000 award. We asked him why he chose Outdoor Alliance, how the inspiration came about for his design, and to tell us about making the trek on the bike from his home city of Salida, Colo., to Ft. Collins, Colo., a 300+ mile commute, to deliver his creation.

Tell us about the design, and the Colo. and NC connection.
Well, I wanted to represent the mountain west where I currently live, work and play and also include references to NC my home state and home to New Belgium’s new brewery. I’ve always loved the floral patterns commonly found tooled onto western saddles so I created a western influenced design using both the official state flowers of NC and Colo., several other common plants and leaves, as well as some easily recognizable landmarks like the Hatteras Lighthouse.

You used some interesting materials, how did you decide what to use?
The decision to use metallic paint and leave a lot of raw steel exposed was made to pay homage to the bike’s U.S. manufacturing and industrial Detroit roots. Leather just looks great on bikes; I knew I wanted to use it from the get-go but when the idea to add leather bags/packs popped into my head…jackpot! I’d done a lot of utilitarian leather work, like saddle and tack repair, but this was my first time doing anything that was mostly ornamental.

How many hours of work did you put in?
Too many to count! Every spare second I had in June and July I put into working on the bike. Art is not a full-time thing for me, I do it mostly for the love of it and a little bit of beer/bike money. For the rest of life’s necessities, I work in the non-profit sector with an outdoor stewardship organization and spend most of the summer on trails out in the woods.

You decided to put your masterpiece to work and rode it to Ft. Collins. Tell us about that ride.
A lot of the flashy snazzy elements on the bike are also functional and helped make it capable for longer rides. Bikes are bikes regardless of their paint job and are made to be ridden, so I wanted to ride it, then decided that I should ride it the 300+ miles from my Home in Salida to the New Belgium brewery in Fort Collins to deliver it. I was impressed by the bike, especially at how quick it got me there, we arrived at each stop along the way with plenty of time to have a beer with friends and I ended up getting to Fort Collins a day early.

Why support Outdoor Alliance?
Its mission and work hits very close to home and is very much in line with my own ideals and value system. Outdoor Alliance gives bikers, hikers, paddlers and almost every other type of outdoor recreationists a collective voice to help protect our public lands. I believe the privatization of public lands today is the death of one of our greatest ideas as a nation and is to the detriment of the quality of life that our children and grandchildren will lead.