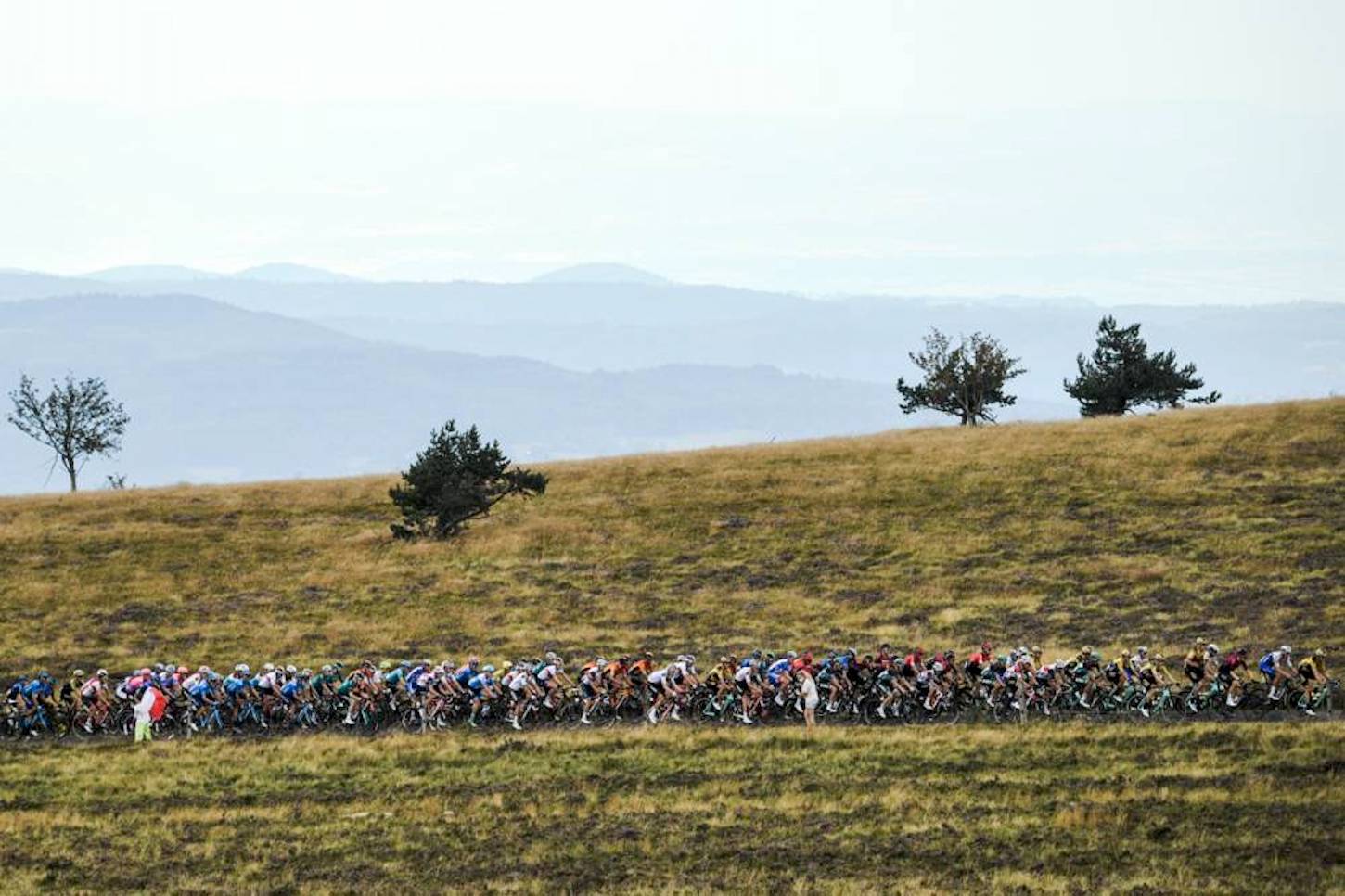 Jumbo-Visma controlled the final moments of today’s stage with Primoz Roglic in the hunt as well.

However, no-one could match van Aert’s aggressions, as he exploded on the final climb, hitting speeds over 40 km/h.

There was less good news for Bernal’s teammate Chris Froome however, who continues to struggle after his return from injury.

Froome was dropped with a few kilometers to go, eventually finishing 5:23 behind the leaders, while his teammate and race hopeful Geraint Thomas finished in the lead group behind the winner.

After the race Van Aert praised his team, acknowledging just how many big names they have.

“Apparently I have good legs. I came really tired to the hotel yesterday, after a few days off. The team still wanted to do a perfect job for me today because we saw some chances in the stage.

“When you have riders like Tony Martin and all these strong leaders, they pulled for me in the end, I had so much motivation to do all I could in the sprint. It was just a great victory.

“It was good for us we saw the finish line already, we had a better view than on the computer. When we passed through (the first time) I told the guys I was feeling good and wanted to give it a go.

“When we started to go uphill I had a whole yellow train in front – even in the end we had Primoz [Roglic] and Steven [Kruijswijk] are still the leaders but this is a big team victory. We keep the momentum.”

It keeps Jumbo-Visma rolling with the Dutch team really flexing their muscles in the past few weeks ahead of the Tour.

A star-studded pack of 161 riders starts from Clermont-Ferrand in the morning. Brent van Moer (Lotto Soudal), Niccolò Bonifazio (Total Direct Energie), Michael Schär (CCC Team), Quinten Hermans (Circus-Wanty Gobert) and Tom-Jelte Slagter (B&B Hotels-Vital Concept) jump away from the bunch after 10km of battle. Their lead is already up to 55” after 11.5km. But Deceuninck-Quick Step’s Tim Declercq and Jumbo-Visma’s Tony Martin quickly get in action at the front of the bunch to control the gap under 6 minutes.

Misfortunes for the attackers

Niccolò Bonifazio (Total Direct Énergie) summits first the cat-2 Col du Béal (km 68.5). The Italian rider looks strong at the front of the race but he is dropped ahead of the following climb, Côte de Coureau (km 93), and has to abandon with back pain, according to his team. The leading group loses two more riders when Brent Van Moer (Lotto Soudal) and Quinten Hermans (Circus-Wanty Gobert) withdraw after a crash.

Michael Schär (CCC Team) and Tom-Jelte Slagter (B&B Hotels-Vital Concept) keep pushing at the front but their lead stabilizes around 3’ as they travel through the valley leading to the final challenges of the day. Bora-Hansgrohe’s leader Emanuel Buchmann crashes with 84km to go but he quickly gets back on his bike to return to the bunch.

All-in in the final climbs of the day

Slagter gives up on the breakaway in the Côte de Saint-Héand (cat-4) and Michael Schär is alone at the front for the last 50km of racing. His lead is down to 1 minute when he crosses the finish line for the first time, atop the Montée Andreï Kivilev (cat.4), with 35km to go. Rémi Cavagna (Deceuninck-Quick Step) and Soren Kragh Andersen (Team Sunweb) attack in this climb but they’re quickly overtaken by a strong move from Quentin Pacher (B&B Hotels-Vital Concept).

The French puncheur joins Schär at the front with 25km to go. But he hits the deck 1.5km later. Pacher gets up but Schär is alone again, with the peloton only trailing by 30’’. Rémi Cavagna and Soren Kragh Andersen join him with 22km to go. Cavagna goes solo 5km later. Stefan Küng (Groupama-FDJ) drives the bunch for Thibaut Pinot with a delay of 15’’.

Jumbo-Visma up the pace inside the last 15km and Cavagna is caught 13.5km away from the finish. Many riders are dropped in the penultimate climb of the day, including the three-time World Champion Peter Sagan (Bora-Hansgrohe), participating in the Dauphiné for the first time in his career.

Rigoberto Uran (EF Pro Cycling) sets the finale on fire with a punchy attack inside the last 3km. Pierre Latour (AG2R-La Mondiale) and Tiesj Benoot (Team Sunweb) also try to shake up the bunch but Primoz Roglic and Tom Dumoulin themselves control the race for Wout van Aert (Team Jumbo-Visma). The Belgian champion, already winner of two stages in the 2019 Critérium du Dauphiné, launches his sprint with 200m to go and his raw power is too much to handle for Daryl Impey (Mitchelton-Scott) and Egan Bernal (Team Ineos).