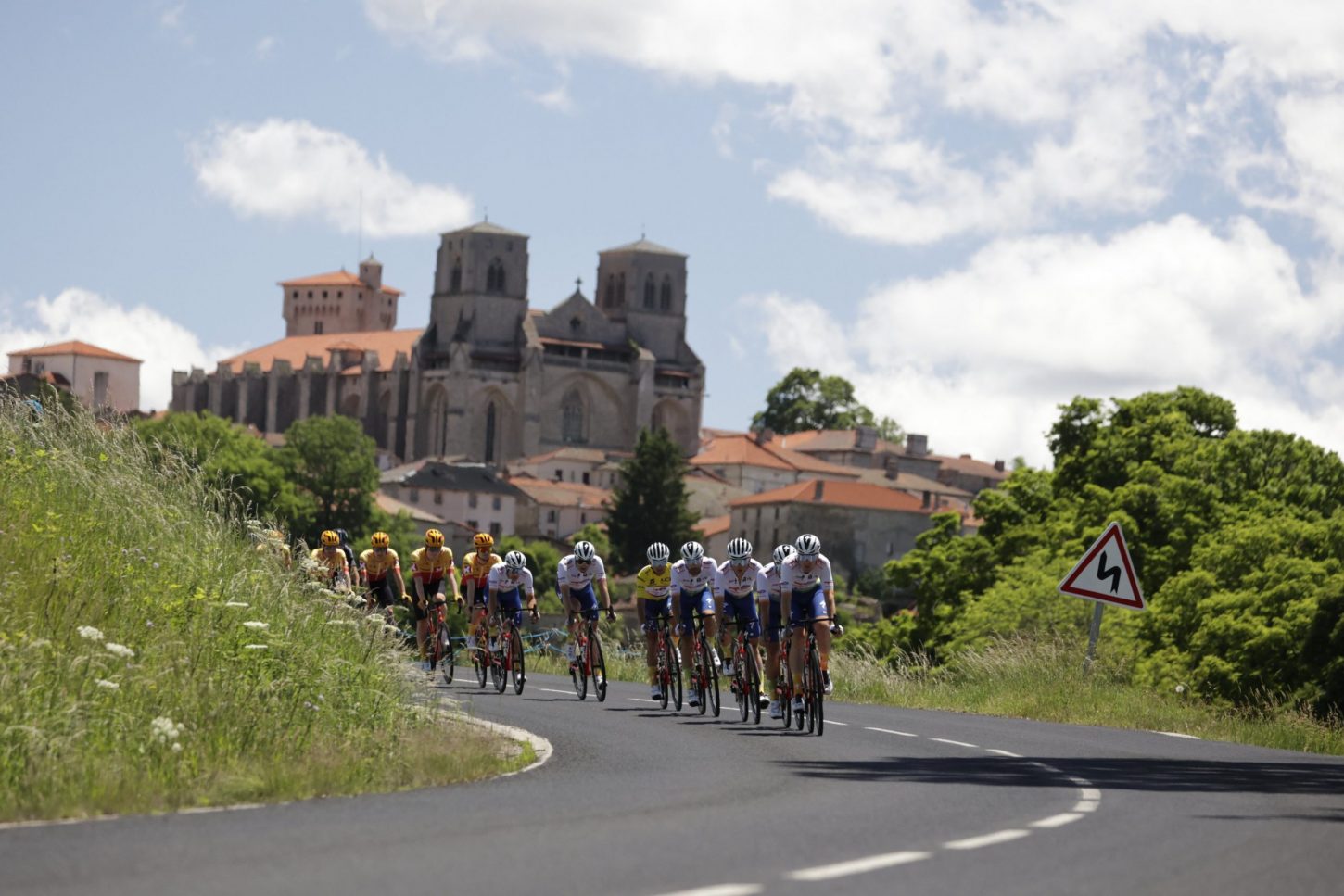 David Gaudu (Groupama-FDJ) won stage 3 of the Critérium du Dauphiné today, after the French rider beat Wout van Aert (Jumbo-Visma) in a group sprint atop the final climb of Chastreix-Sancy.

Van Aert initially raised his arms in celebration, only to have his hopes dashed by Gaudu, who nixed the Belgian rider on the line.

The escapees continued to remain out front for the next 40 kilometers, with Goldstein eventually dropping back into the peloton.

The first of three categorized climbs of the day, the Côte de Saint-Vert, saw Schönberger cross the summit first, as the group continued to increase their lead to 3:40 over the field.

Back in the peloton, B&B Hotels-KTM’s Pierre Rolland, Alexis Gougeard and Miguel Heidemann decided to go on the attack, quickly joining the three leaders with 100 kilometers still to go.

With the peloton a further three minutes back, the B&B Hotels-KTM ‘s trio controlled the tempo, with Rolland scoring more points over the two remaining classified climbs to consolidated his lead in the KOM category.

Meanwhile, Heidemann, Gougeard and Champion were dropped from the group, as the remaining leaders continued to maintain a 2:15 margin over the climb of the Côte de Besse-en-Chandesse with 30 kilometers to go.

In the meantime, numerous riders were dropped from the peloton as they struggled to keep pace, while the gap between the chase and the breakaway group continued to fall to just 35 seconds with 10 kilometers remaining.

Heading up the final climb of the day, the Chastreix-Sancy, Rolland dropped out of the breakaway, with Schönberger caught shortly afterwards, leaving Gregaard no option but to go on the attack alone. But, the Danish rider was quickly reined in by the Jumbo-Visma led peloton.

From there, an attack mid-way up the climb came from Tsgabu Grmay (BikeExchange-Jayco), with Rémi Cavagna (Quick-Step Alpha Vinyl) quick to mark his move.

But, their aggressions were easily quelled by Jonas Vingegaard (Jumbo-Visma), while GC leader Vuillermoz struggled to keep the pace, later getting dropped off the back of the group.

With 2 kilometers to go, there was a momentary cease fire in the peloton, as Primož Roglič slowed the tempo in support of Van Aert, who briefly lost contact with the lead group.

As the peloton hit the final stretch, Van Aert launched his sprint, coming off the wheel of Vingegaard during the last few meters.

Looking poised for victory, a dramatic twist saw Gaudu overhaul his rival with a final bike throw on the line to snatch the stage honors.