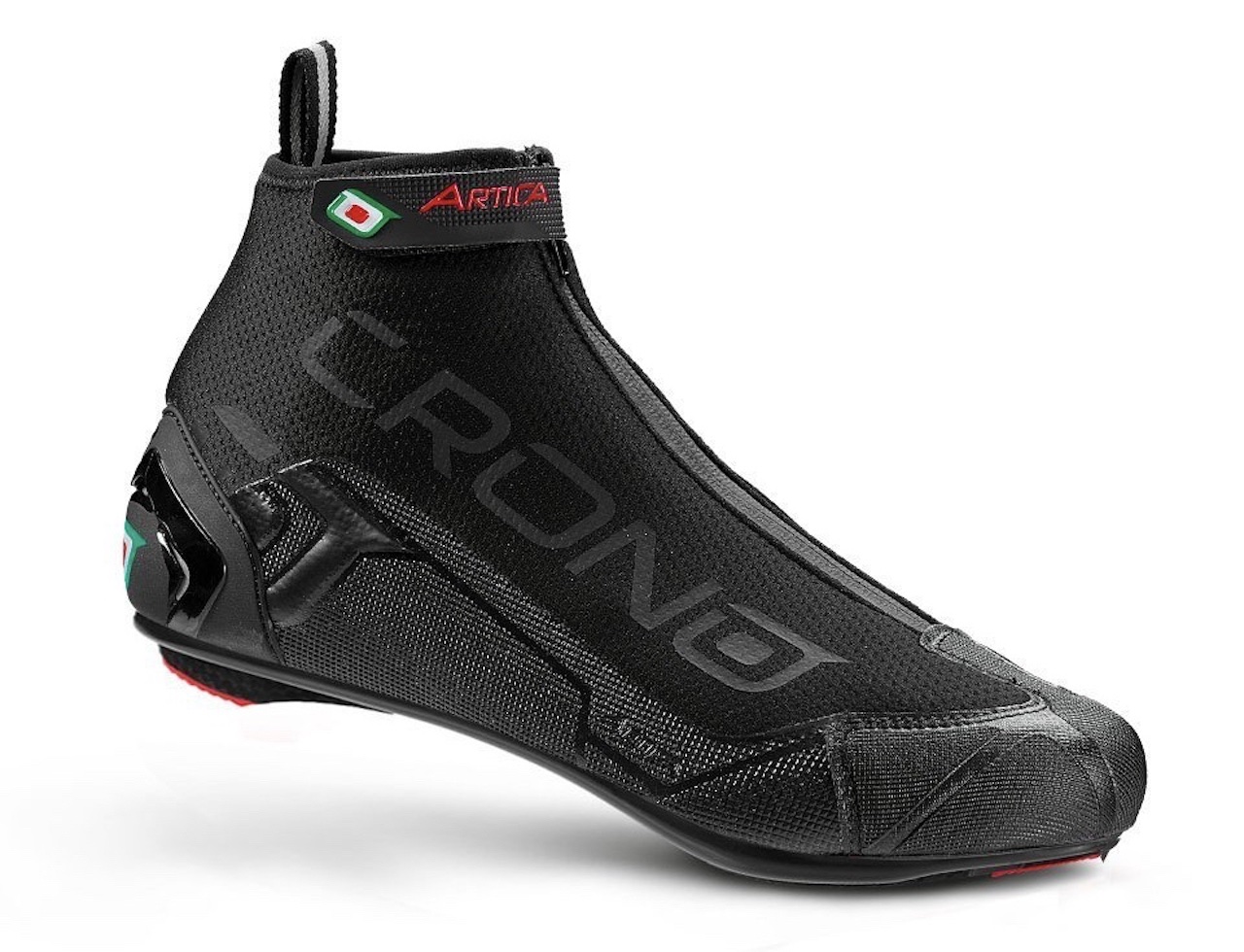 There are more cycling shoe companies out there than one could shake a frame pump at. But, aside from the big name players in the cycling footwear segment, there are some lesser-known brands like Crono, who’ve been turning out cutting-edge shoes from a time when most of their competitors were still going through puberty. And, if one were to dig a little deeper, they would also discover that the Italian brand was responsible for making high-end shoes for many well-known labels over the years as well. Think SIDI, Fizik and others.

Based in Callalta in the Treviso region of Italy, Crono offers a range of cycling shoes that span the road, mountain bike and triathlon categories.

However, given that Jack Frost was just around the corner here in New England, reviewing Crono’s CW1 winter cycling shoe was of particular interest.

Also, above and beyond the exquisite materials, attention to detail and boot-like construction, what was especially appealing about the Crono CW1 was the fact that it was truly a dedicated road shoe, meaning it utilized a traditional 3-bolt pattern, allowing the shoes to work with actual road pedals instead of hokey MTB/SPD’s.

Other appealing features included the CW1’s rubberized, neoprene outer-shell and an anti-slide zipper that were both water-proof, as well as a windtex lining, making the shoes ideally suited for winter cycling during even the most extreme riding conditions. Moreover, the shoes comprised a super stiff, carbon fiber reinforced nylon sole to ensure optimal power transfer.

Additionally, the CW1 featured a sock-like, neoprene inner construction, combined with a unique draw-string fastening system, creating the sense of having a traditional road shoe that’s been housed within a boot

So, how did the shoes perform during the throes of winter cycling here in western Massachusetts?

Well, for starters it was a relief not having to wrestle neoprene booties over my regular cycling shoes, while my body proceeded to sweat underneath layers of apparel before heading out into the harsh cold.

For this reason, I would often reverse the process of getting dressed by first putting on only my lower garments before donning shoes and booties. While this would stave-off overheating, it would leave me duck walking around until I could get the rest of my duds on. Anyone who’s a die-hard winter cyclist knows exactly what I’m referring to.

In any case, despite the cold, unwelcoming winter landscape, once out on the road my feet felt privileged to be in the CW1’s, which not only provided excellent comfort and support, but warmth being their real hallmark of achievement.

Indeed, with temperatures at times dipping into the single digits, my feet never felt warmer in a pair of cycling shoes than they did in the CW1’s. But, what’s interesting here, is how the level of warmth could easily be dialed up or down based on the choice of socks. This is important because it gave the shoes a broader range of ride-ability than I previously thought.

In fact, given the shoe’s rubberized, neoprene outer-shell I could envision wearing the CW1’s with a lighter sock in temperatures up to 40 degrees in order to capitalize on their wet weather riding capabilities. Think early Spring gravel rides or bikepacking excursions.

Also, despite the shoe’s series of zippers and draw-string fastening system, adjusting fit out on the road was a cinch. Try that with shoes under booties.

In summary, the Crono CW1 proved to be an excellent choice for an inveterate roadie such as myself who’s dedicated enough to hit-out on the road during the off-season, provided I have the requisite pair of kicks that are up to the challenges of winter cycling.

Moreover, at $249.99, the CW1 is very reasonably priced for a shoe of this quality and application.

Special thanks to Crono’s official import in the US, Gizmo Cycling, for providing the CW1’s for review.