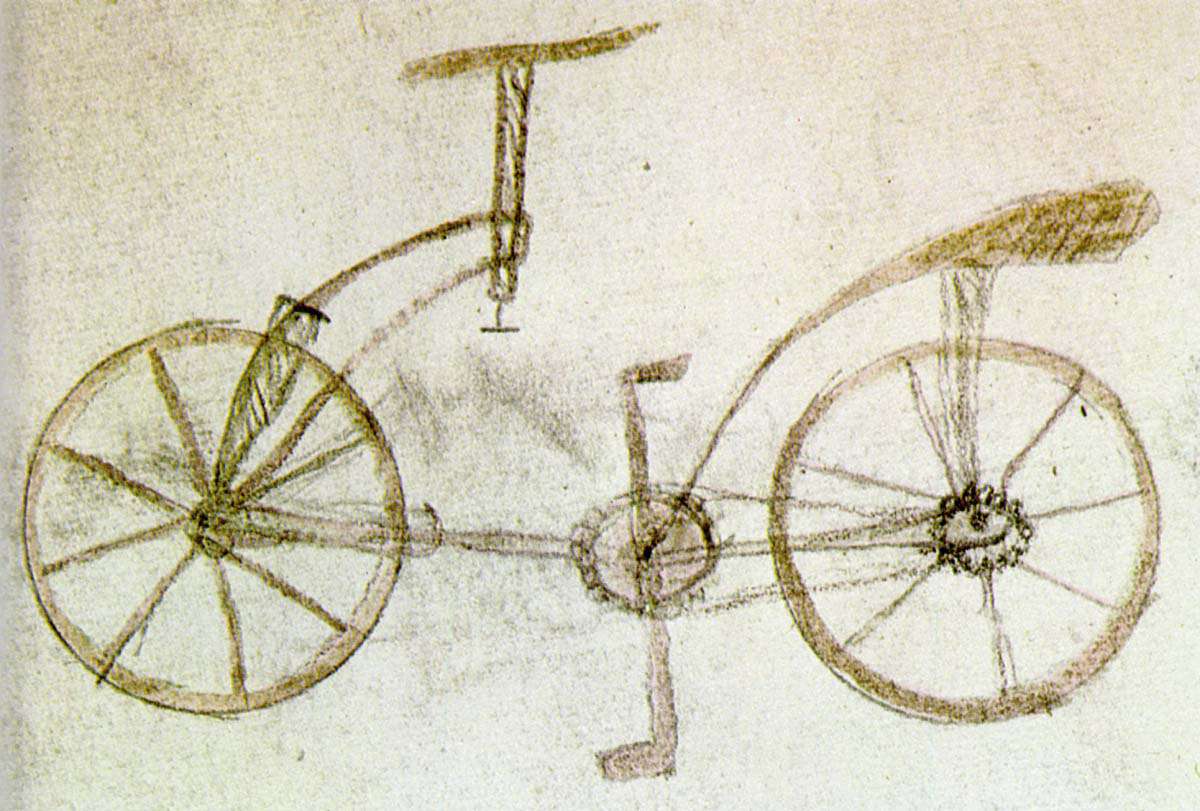 While Leonardo da Vinci anticipated many modern developments, he didn’t invent the bicycle. At least that’s what experts think.

In fact, the famous sketch of a pedal bike that was found among his manuscripts, The Codex Atlanticus, is believed to be a doodle made by an Italian monk in the 1960s, says a German researcher.

The supposed Renaissance bicycle, complete with pedals and chain, has appeared in numerous books and museum displays. Historians had already concluded from the poor quality of the sketch that it did not come from Leonardo’s ownhand. But lexicographer Augusto Marinoni, who discovered the sketch in 1974 while working at the Catholic University of Milan, argued that it was a pupil’s rough reproduction of an original by the master, since lost.

“No one questioned it,” says Hans-Erhard Lessing, retired curator of the Museum of Technology and Labour in Mannheim. “The Italians were ecstatic to have invented the bicycle.” The next record of a similarly advanced cycle dates from 1855, nearly 400 years later.

The bike appears on the back of a sheet of authentic Leonardo sketches along with crude outlines of phalluses that were probably sketched by one of his adolescent apprentices. However, a 16th-century conservator later folded the sheet in half and glued it shut, hiding the obscene graffiti from view for nearly 500 years.

But Lessing tracked down art historian Carlo Pedretti of the University of California at Los Angeles, who had examined the folded pages in 1961. Pedretti held them up to a strong light and saw no bicycle. Instead, his notebook records two circles with curved lines through them where the cycle now appears. “What I saw was not a bicycle,” Pedretti said.

Lessing believes a forger drew in the bicycle, using the two circles as wheels, after the page was unfolded in the 1960s by Italian monks restoring the manuscript. “It’s the sort of thing a bored monk might do,” says Nicholas Clayton, editor of the British cycling magaezien, The Boneshaker.

Unfortunately, Marinoni later fell ill and was not able to respond to Lessing’s reassessment of the sketch. But when the possibility of forgery was raised at a conference in France in 1991, he said: “I am sure of the honesty of the monks.”

Chemical analysis of the brown crayon marks that make up the sketch could provide conclusive proof that it is a modern addition. But unfortunately, the restored pages have been sealed away in plastic to preserve them. However, Lessing notes that none of the crayon had rubbed off on the facing side of the folded page, despite five centuries of supposed contact, whereas bits of the obscene graffiti had.

Despite the mounting evidence that the drawing wasn’t genuine, modelers working with the Museum of Leonardo da Vinci in the inventor’s home town near Florence discovered a full-scale wooden replica, which later went on display in the exhibition, Mechanical Marvels: Invention in the Age of Leonardo, in New York.