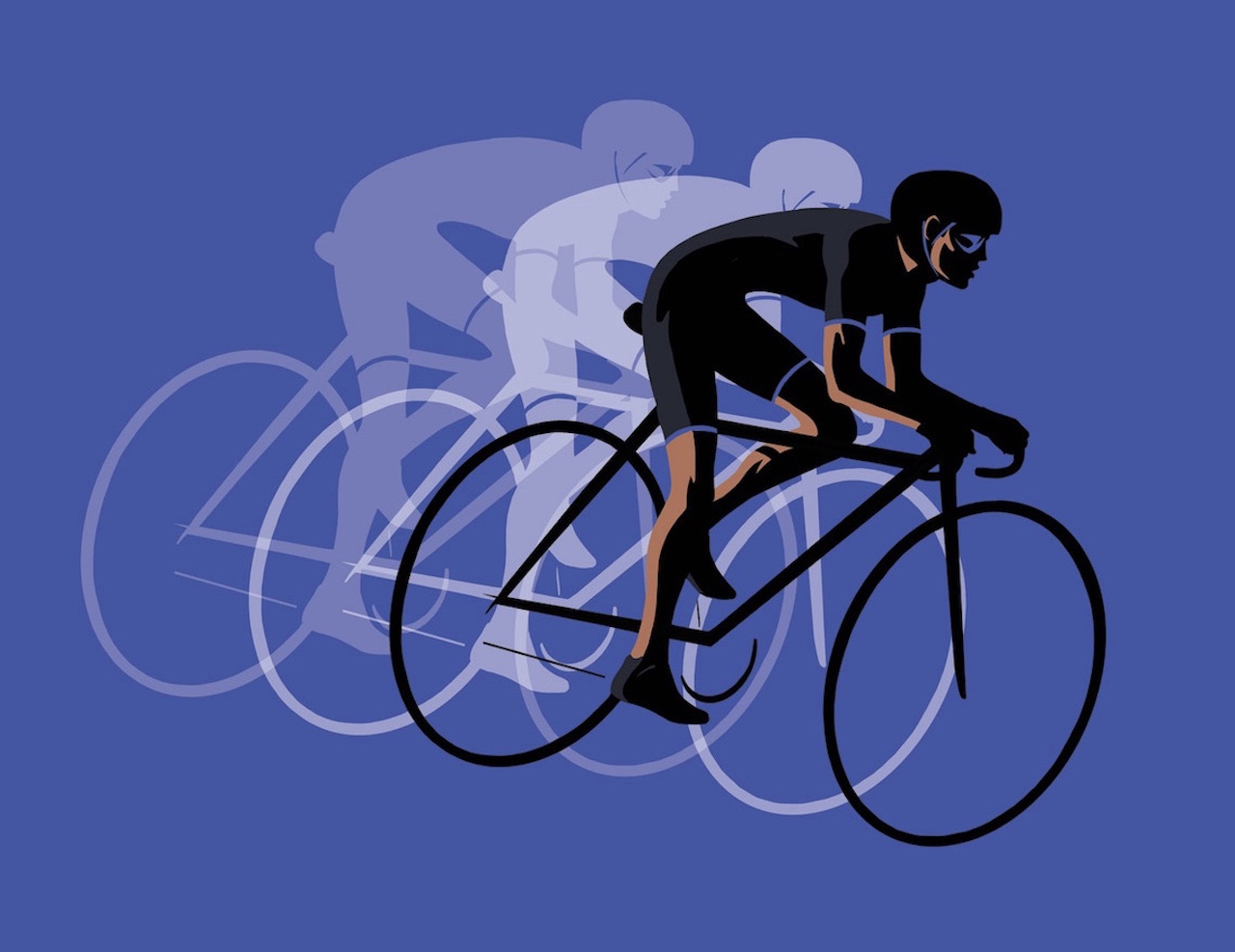 Here, Brooks shows off four of his works inspired by cycling, which rely on his unmistakable use of color and design to create a truly unique landscape.

Brooks was born in London, where he began drawing and painting avidly as a young boy.

Being a collector of American DC comics and Tintin Books, further added to Brooks’ imagination and skills, leading to his first commission as a teenager to create illustrations for sports companies.

Brooks later graduated with a degree in Graphic Design and Illustration from St Martin’s College in London, and subsequently went to work for British Vogue after winning the Vogue Sotheby’s Cecil Beaton Award for Fashion Illustration.

While at St Martin’s College, Brooks traveled widely and filling travel sketchbooks with colorful drawings, painting, notes, and collages. He won a bursary and further award for a project exploring Mayan archaeological sites across Mexico and Central America and made trips to Turkey,Morocco,Kenya, Italy, New York and across Europe and travel has remained a recurrent theme throughout  his career. Living in the Portobello and Notting Hill area of London in the 1990’s was also a formative time for his aesthetic style to develop.

After graduating with a Masters Degree in illustration from the Royal Collage of Art, Brooks continued working with magazines including The Face, Vogue, Elle and World of Interiors as well as illustrating glossy club flyers for cult London club Pushca and a long running series of cd covers for Hedkandi selling in excess of 6 million albums. He also made drawings at the Couture Shows in Paris for the Independent Newspaper and illustrated reports from London fashion week for Elle and New York fashion week for Visionaire.

Brooks is particularly noted as being among the first fashion illustrators to embrace and pioneer  computer technology in his field. The glamorous and aspirational world he presents in his work  is a combination of life experience and imagination, and has provided a means of communication for a wide range of luxury and lifestyle brands.

Brooks’ first book, Paris Sketchbook was published in 2013 and began a series of colorful travel journals depicting different cities around the world. It’s follow up London Sketchbook was published in Spring 2015, and went on to win the V&A Museum Book Illustration award in 2016, and more recently in 2017 ‘New York Sketchbook’ completed the ‘City Sketchbook’ trilogy. All were conceived, written, researched and illustrated by Brooks, an intense project that has enriched his repertoire of styles and archive of images.

Each year Brooks delivers commissioned artwork to clients around the world, and enjoys adapting his style to lend glamour, creativity and his distinctive illustrative design style to a wide range of advertising and commercial projects.

In 2017 and 2018 Brooks was chosen to exhibit work with renowned GRAY MCA Gallery in galleries in New York and London as part of a continuing collaboration that is expanding his work in the context of fashion illustration as a collectible and sought after art form.