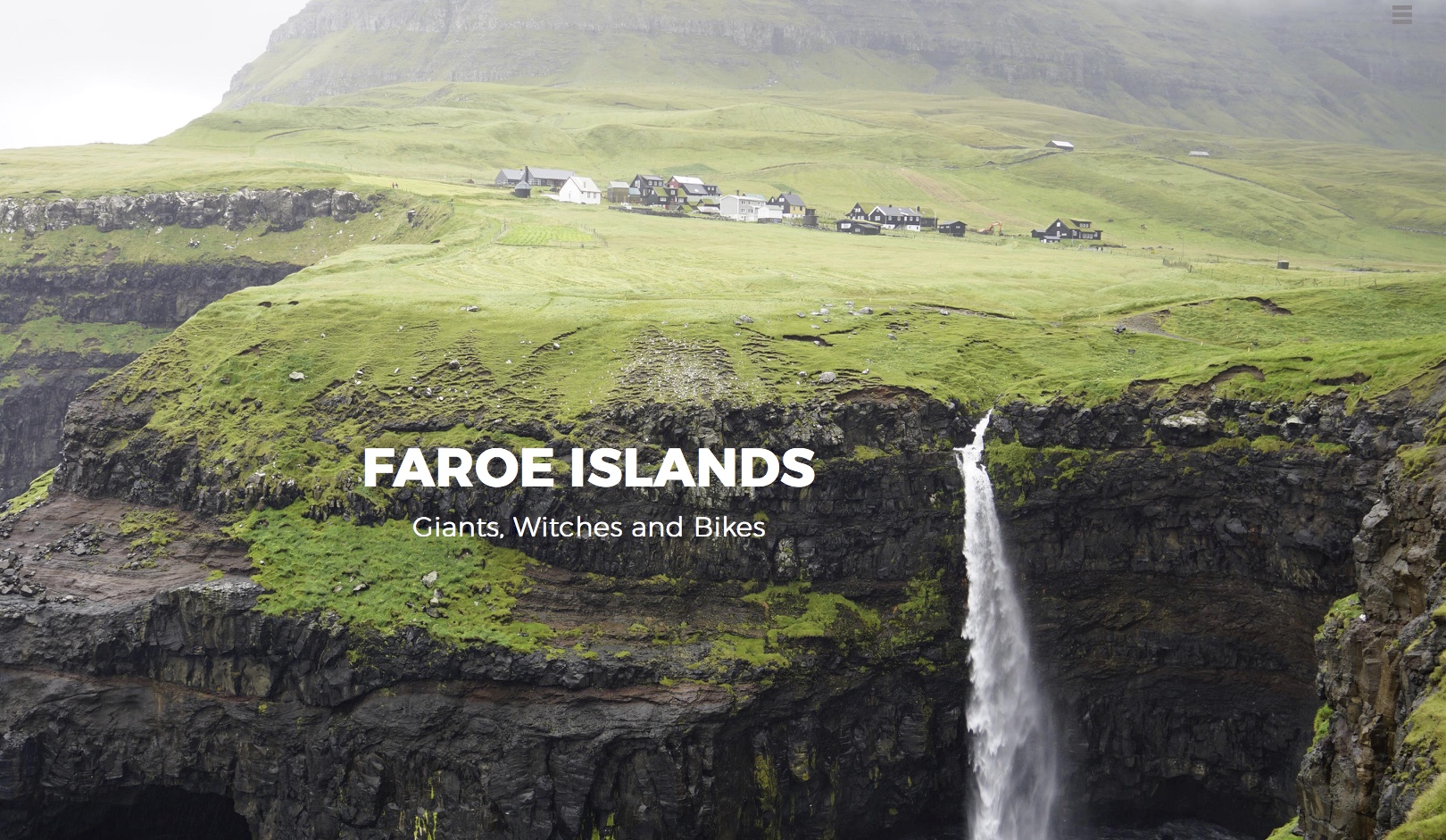 Any image you find online of the Faroe Islands portrays a dramatic and beautiful landscape. The Faroe Islands, an archipelago of 18 mountainous islands volcanic in formation emerge dramatically from the Atlantic Ocean. Located between Iceland and Scotland their landscape and climate is comparable to both these countries but with a unique charm of their own.

The population of nearing 50,000 exists in mostly small villages, the location of these dictated by resource or industry. Between villages the land is mostly undeveloped adding to the sense of remoteness that gives the Faroes their appeal to adventurous travelers. The plan was over the three days to sample a variety of the islands, two days could be linked by road and the third only accessed by ferry. We would utilise local help to transfer between our end and start points each day. Joining myself would be Fiola Foley from primo planning platform Komoot (komoot.com) and shooter Chris McClean.

As we attached the last of our bags to our bikes and readied ourselves to start riding the first raindrops started to fall, this would be our weather for the duration of the day.

Our initial route would be on the main Island as we ticked off some of the more iconic imagery Faroe Islands had to offer. Hanging lakes, huge sea cliffs and beautiful waterfalls, with less than 60km of riding needed we would see them all.

One thing that is common place throughout the varying islands is their folklore. Any and all of the great landmarks have their own tale of creation … many and most involving giants, witches and Icelandic rulers set to bring the Faroe Islands further north to join the Icelandic mainland.

We didn’t need to ride any more than 5km to reach the first highlight, The Witches Finger.

A dramatic rock feature which folklore has it is the finger of a witch that came to throw the Faroe Islands to Iceland. When she came to the sea south of Vágar, the sun came up and she was turned into stone and fell into the ocean… tough break.

After grabbing some shots to document our viewpoint we turned and headed west, passing our start point. The rain now had intensified and we were being soaked from above and below with spray coming up from our wheels. We rode the next long road section in single file as we tried to focus more on the landscape and less on the weather.

At the end of the road, accessed via a tunnel, we reached the most westerly point of the trip, Gasadalur. A small village frequented by visitors who look to view the dramatic waterfall here. A narrow but powerful stream of water exits the cliffs and pierces the rough sea below, though this was our lunch stop we took some additional time to spend viewing this feature before finding the café.

Following on from lunch the highlight of the day and maybe the reason we first thought about the Faroe Islands as a destination was our next stop, Leitisvatn Lake. The lake is the largest on the Faroe Islands though this isn’t what makes it unique. Dubbed ‘The Hanging Lake’ it sits perched atop a cliff posing a mind bending spectacle.

Our ride to reach the lake tracked back along the road we had already travelled but just as we closed in on our previous nights accommodation we swung south. A steady climb then turned in to a perfect singletrack trail that took us all the way to the cliff edge where we could view not only the lake but the waterfall, Bøsdalafossur, that drains the lake to the sea.

Day one had been a great success and already delivered some amazing scenery and allowed us to capture some outstanding images. However, we were still pleased to finally exit our wet cycling clothes, get in to something warm and dry and start the car transfer to the start of the next days riding.

Our overnight had been in a beautiful small house located in the village of Elduvik located on Eysturoy, the east island. The evening meal had been catered by the mother of our trips host Alfred and we had dined well on fish and potatoes setting us up to get well rested and prepared for another day of whatever Faroe had to throw at us.

The second days ride already looked to be drier than the previous and would be entirely on tarmac. However, the challenges would be the much longer climbs and potential for strong head winds.

The initial kilometers were skirting the large inlet separating Elduvik from the village of Funnigur. The rolling tarmac was a gentle start to the day but as we reached Funnigur we could see the start of the large climb we had to face next.  We climbed steadily and at a junction we turned right knowing in the not too distance future we would have to climb back to this point. Our first stop was Gjogv, a village with only a single road accessing it … what descends to visit this place must climb to leave. The fast and fun tarmac descent only slightly tainted by the knowledge that we would be ascending it to leave.

Gjogv offered another picturesque Faroese village. Painted houses with the sea as a backdrop and the steep hillsides protecting its inhabitants. This was a great place to take an early stop and enjoy a coffee.

Fully caffeinated we started the climb.

The day’s end goal would be the village of Tjornuvik, with its beautiful small beach and surf break. But to get there we would have to return to the junction we had left before and not only climb further and then descend but again head inland to allow us to skirt the fjord separating us from our end goal.

This time as we left Gjogv the climbing was with the wind in our faces as we struggled to make progress against this ever increasing resistive force. The descent was then made further interesting as the wind shifted across us and forced us to lean our bikes over just to track straight.

As we reached close to the finish of the descent our view out to sea allowed us to take in another geological feature steeped in folklore, Risin & Kellingin or the Giant and the Witch. As most the story tells of another failed attempt by Icelandic rulers to capture these islands for their own. After a long journey first inland along the shores of the fjord and then back along the opposing bank toward the northern coast we were able to view this landmark from a differing viewpoint just before dropping down in to Tjornuvik.

By the time we arrived at the beach most of the day had already gone. We took some late lunch here with coffee and waffles before packing the bikes again to transfer by car to Torshavn where we could take the ferry to Suduroy, the south island.

Before the ferry though we took opportunity to stop in Saksun. Again like near every other place in these amazing islands a must see destination for its stunning views, geological features and interesting settlement.

On the ferry a well deserved power nap was observed. The second day through headwinds and long climbs had been tough and arrival in Suduroy and a short ride to our AirBNB was welcomed.

Suduroy offered us opportunity to meet and dine with a local household. We took in an evening meal the night before and breakfast prior to our depart. These interactions are invaluable as Faroe Islands is as interesting not only for its landscape but also the people who have made this place their home. A challenging environment to live in not all can stick the ever shifting weather and threat of storms.

We saved the biggest ride until last both in terms of distance and elevation so when we woke to warmer and clearer weather it was a huge boost. Again another road based day we had decided to tackle all the big climbs as we headed out south then on our return leg we would utilise the tunnels that cut through the hillsides to make the return leg a little easier.

One thing the Faroe Islands are never short on are huge coastal views, every one spectacular and we never tired of them. The first climb took us up above the fjord we had entered by ferry to day prior and well timed as we could watch the same ferry repeating its journey far below us.

Our mostly southerly point of this day would be the village of Sumba. Access was possible by an unlit long tunnel but on the outward leg we made the longer road climb. Nearing the top our views became obscured by cloud as it stuck to the hillside. As we made our own progress gaps opened up on the road between us and as we entered the cloud we could no longer track each other by sight.

Stopped on the final turn before the top I took some time to explore the edge of the cliff, my interest pricked by a danger sign. As it would happen the danger sign was truly warranted and as the cloud broke an uninterrupted huge fall to the sea below came in to view. My exploration then took a much more reserved approach not so close to the edge.

As tough as the road climb was I was wishing we had returned the same way as we entered the unlit tunnel from Sumba. With only one good front light between us we were mostly forced to ride in near pitch black luckily with our rear lights indicating our presence to what little road traffic there was. The warmth of the sun had never seen this dark tunnel and it was many degrees colder making for quite an eerie experience.

A tailwind pushed us steadily back to our start near the ferry terminal but we rode beyond for lunch at the eclectically decorated Café MorMor. This final stop ended the bulk of the riding portion of our trip with only our ferry ride back to the main island and a flight home.

The Faroe Islands delivered on so many fronts. The landscape, the people, the riding … all were exceptional. Our plan to travel quickly between the rides by vehicle allowed us to sample some of the best sights and experiences on offer though the possibility of connecting these rides with additional days on the bike is wholly possible.

Love your stunning coastal views, interesting folklore and endless geographical marvels then The Faroe Islands are for you.