Cyclists Should “Let Their Emotions Out” ! 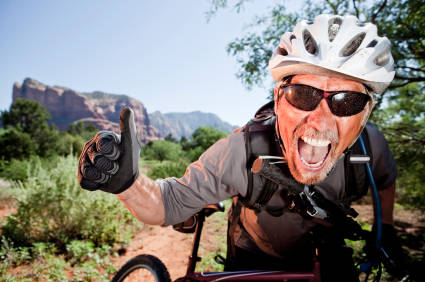 According to a recent study published by Dr. Chris Wagstaff at the University of Portsmouth, cyclists who want to win, should let their emotions out !

Wagstaff’s  study was the first to examine the effects of suppressing emotions during high endurance sports – with  strong evidence suggesting that burying feelings results in poorer performance.

The research was published in the Journal of Sport and Exercise Psychology.

Wagstaff said: “Sports people frequently have to control their emotions in the run-up to and during competition, but this appears to significantly reduce the level at which they perform. Their thought processes are diminished, they put in less effort and they feel more tired than when they aren’t asked to hide what they’re feeling.

“We all know the feeling of having to sometimes hide our thoughts and feelings. It can make us feel exhausted, and because sportspeople operate in a result-driven goldfish bowl, the demands for suppression are particularly high.

“To protect sporting performance, it’s important that those who manage and organize sportspeople should avoid exposing them to tasks which demand emotion regulation close to competing.”

Some of the activities likely to put a heavy emotional load on athletes include media interviews, meeting fans, or trying to suppress feelings of anxiety, anger or disgust.

However, the findings have implications beyond sports, and are likely to be relevant to in any profession which requires emotional regulation and physical endurance, including the military, medical and emergency services and manual employment.

Wagstaff said: “Sports organizations impose chronic expectations and requirements for emotional suppression on performers, such as being overly optimistic about chances of success, being supportive of under-performing leaders, or being friendly to fans and forthcoming with media, but there is a cost in terms of performance.”

For the study, researchers examined a mix of 20 male and female athletes, all of whom were asked to watch a three-minute video in which a woman throws up and then eats her own vomit. It was chosen to provoke a strong feeling of disgust.

Wagstaff said: “We needed to elicit a strong emotional reaction. While there is huge variation in what individuals find happy or sad, most people agree on what is disgusting.”

In one condition participants were told to suppress any emotions evoked by the upcoming video. They had a camera trained on their face to record their reactions and they had to try and hide whatever feelings they had throughout the three minutes. In a second condition participants watched the video but were not told to suppress their reaction to it. In a third, condition, the control, participants did not watch the video. All then cycled 10 kilometers as fast as they could.

Those who had suppressed their feelings watching the video were measurably less able to think clearly and performed the worst. All participants were tested in all three conditions and after just three minutes of having to self-regulate their emotion, they were slower at cycling, generated less power, had a lower heart rate and thought they had worked much harder than they actually had compared to when they were not asked to control their emotions or when they hadn’t watched the video.

However, no differences were found between the conditions where participants watched the video without being told to suppress their emotion and where they didn’t watch the video.

Wagstaff said: “It is notable that those asked to suppress their emotions had a significantly lower maximum heart rate. This appears to indicate that people who are suppressing emotion are less willing or less able to put their all into the task. They also feel more tired, even though they had put in less effort.”

The findings support and significantly extended previous research on the impact of self-regulation on physical action.