Cyclocross State of Affairs: For Whom the Bells Will Toll in 2017? 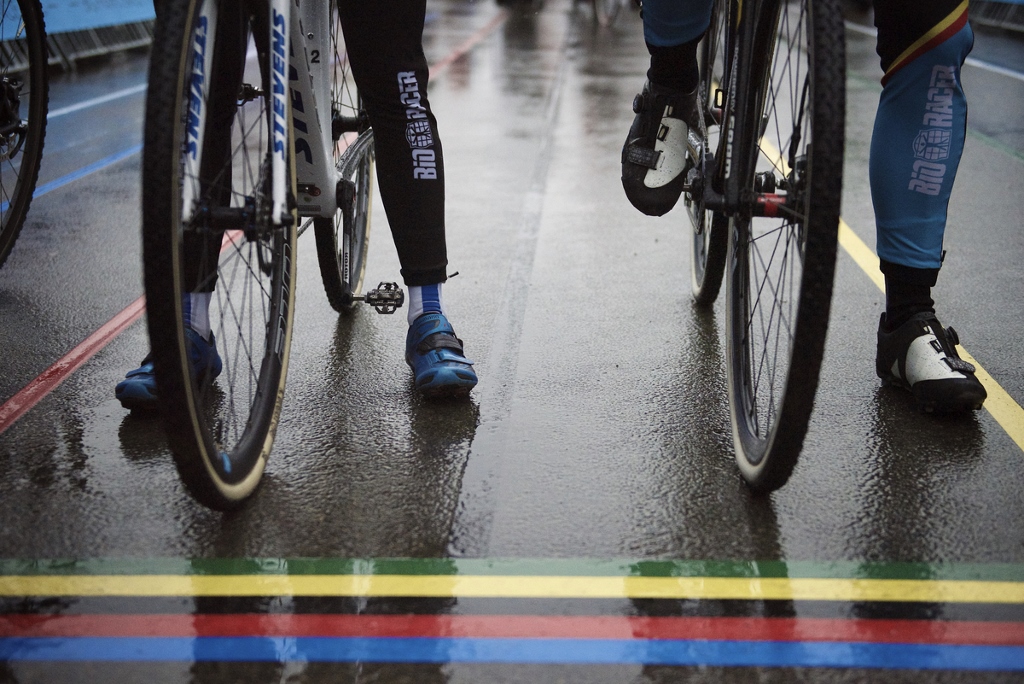 The taste of blood and iron begins to rise up your esophagus as you feel your heart explode out of your chest.  Your lungs sear with pain as the frigid wintery air reeks havoc on your airways. Your legs scream with lactic acid build up, thick mud mixed with salty sweat blurs your vision as you ride a deep off camber section before dismounting and legging it up a steep embankment.  Cyclocross is fusion of disciplines combining running and pedaling in no set order.  A ‘cross’ rider must ooze an excess of hardness as they are up against the cold, dark unforgiving months of winter.  They must possess not only the intangible marriage of grit and lunacy, but exhibit technical bike handling skills, be able to throw down watts, are eager to suffer mental and physical torture and be endowed with timing, balance and grace.

I have kept my finger on the pulse of cyclocross for almost 10 years both as a local New England racer and spectator of elite continental competition. I got my first taste of watching the likes of Sven Nys, Niels Albert, Bart Wellens, Zdenek Stybar, and Kevin Pauwels in a European World Cup race and it had me 30 seconds into the first lap. I was enthralled with it all; the snow and mud course that weaved through the Ardennes forest, each riders unique skillset as they negotiated twists, turns, barriers, and uphill runs. Most importantly what grabbed me was the heart, the gravitas that these guys raced with. I not only saw this desire within the lead group of riders but saw it in the last rider going through the finishing line. An eagerness to suffer for 60 minutes in some of the most harshest conditions, to me that is what cyclocross is about. I must say I am in no way an expert of all things cyclocross and have no connections to any USA or Euro inside baseball knowledge. This essay is my perspective, both good and bad, of the current state of affairs of a sport that is growing exponentially in rider and viewership not only here in the USA but worldwide.

I am drawn to battles that unfold throughout a cyclocross race.  Like two prizefighters exchanging blows round after round, cyclocross invites such exchanges of power and position. Unlike road racing where tactics paramount and only battle might be a bunch sprint or the ascent up a Col, cyclocross racing is built on recurring clashes. From the start,  there is a battle to get ideal positioning into the first turn. This is marked by a full throttle sprint that can help those riders in the back rows of the starting grid. For example, on December 26th, former World U-23 World Champion and current Astana professional road rider, Lars Boom raced the Telenet UCI World Cup in Heusden-Zolder where he was positioned in the last row of the starting grid because he hasn’t raced all year. When the lights turned from red to green Boom was off and by the first turn had moved through the field at a blistering pace into seventh position. He would eventually finished 11th on the day, a very impressive result for a rider who hasn’t raced consistently in many years. Each course is different and provides features that can make or break a rider.  Features can consist of barriers that riders have to dismount and run over, steep uphill runs, downhill off camber sections, sand, deep mud or anything  else that the course designers have in mind.

This brings me to the state of affairs of the cyclocross. Having watched countless races from years gone by this winter, as I slogged away on the trainer, I kept asking myself the same two questions over and over. One, what has happened to the weekly slugfests where a multitude of riders could win on any given day? And two, what has happened to the lack extreme weather marked by snow, deep sticky mud, rain, wind? I have been faithful fan and have continued to tune in week in and week out hoping to see the magic return but this year unfortunately hasn’t happened in the men’s European field. The women’s elite field has been just the opposite. Races have been often marked but continuous lead changes, a four up sprint to the line, and several riders taking the glory.  Sanne Cant has been racing very strong along with Sophie de Boer, Ellen Van Loy, and reigning World Champion Thalita De Jong, and Nikki Brammeier to name a few. The late arrival of Marianne Vos and Katerina Nash to the scene have really turned the late season races into a clash of the titans. American cross juggernaut Katie Compton has been blazing a trail on the US scene foregoing the weekly European donnybrook until the 2017 Worlds in Bieles, Luxembourg.

So to answer my first question, what has happened to the state of cross in 2016? This is what I have come up with. From watching all men’s and women’s European races thus far in 2016 there has been a dramatic shift in the competition level of each field. A changing of the guard has occurred in the men’s elite field. The absence of the “Cannibal” Sven Nys has been most notable. Center stage now belongs to two young superstars Belgian Wout van Aert and Dutchman Mathieu van der Poel. Van Aert, current world champion and Van der Poel, 2015 world champion, have been head and shoulders above the  rest of the field. Wout and Mathieu ranked one and two in the world respectively have won all but a handful of races this year. Generally speaking, each race has played out with one or two laps of jostling for position only to see the two of them breakaway from the group to never look back. Seasoned veterans Kevin Pauwels, Klass Vantornout, Tom Meeusen have all been at the front of affairs but eventually succumb to the blistering pace of the dynamic duo.

There is an emerging group of young riders that have been at the pointing end of the races this season, notably Toon Aerts, Laurens Sweeck, Michael Vanthourenhout, Corne Van Kessel, and Tim Merlier to name a few. These riders have been slugging it out all year long with marginal results.  Most notably, Toon Aerts won the European Championship in late October but other than that is has been, as my dad says, “dry as a popcorn fart” for these fellas. The two young phenoms Van Aert and Van der Poel come from a brilliant lineage of cycling families and along with their individual strengths have been too much for the rest of the field.

Though I cannot harness the elements or prognosticate the forecast I am hopeful 2017 will harken back to the days where horrid cross conditions were the norm and reinstate a level of racing that is unpredictable and riveting to watch. There are stages and phases of life that we all personally go through, the state of European men’s field is going through what seems to be a more arid phase, the women’s field on the other hand is verdant. I am eager to see what type of harvest the 2017 World Cyclocross Championship will bring.