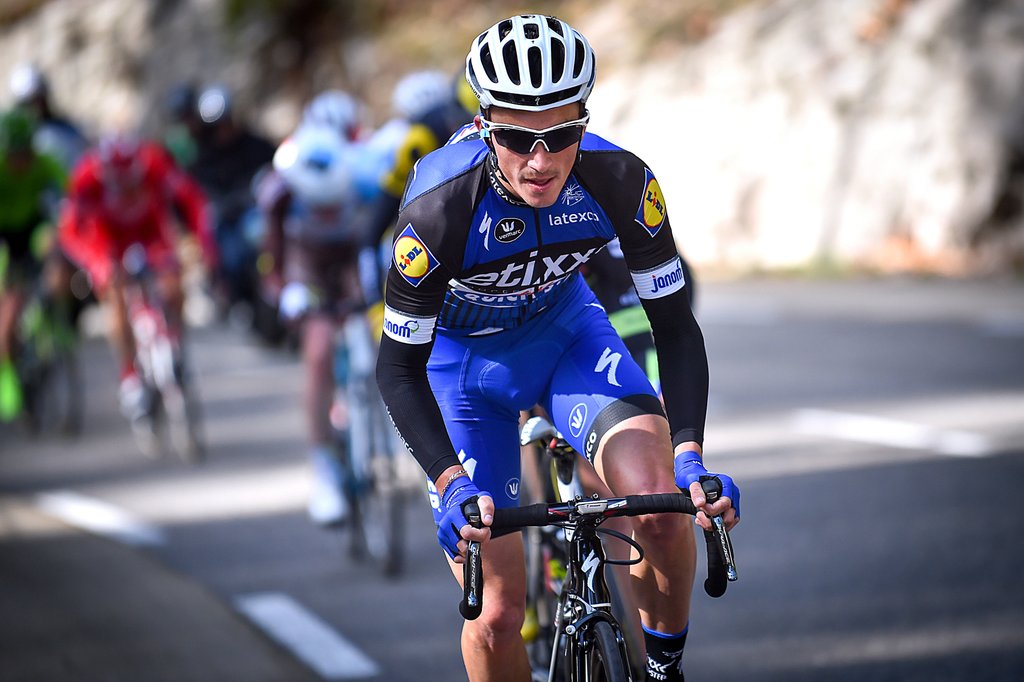 Petr Vakoc took victory in today’s De Brabantse Pijl – La Flèche Brabanconne, after the young Belgian rider executed a perfectly timed attack, along with the help of his teammate Julian Alaphilippe, inside the final kilometer.

“It was an amazing day and I’m really grateful to the team, they did an absolutely amazing job,” Vakoc said. “In the final Julian was pulling the five of us, and I had this attack in my mind.

“Normally I would like to go a little later, but then everyone was hesitating a little in the final corner. I just went full gas – the steep climbs really suit me well. I went really hard to make the gap but it was still really long to the finish. When I looked back and saw the gap was getting bigger, it gave me more power and I couldn’t stop. I left everything out there.”

Today’s win was Vakoc’s third one-day victory of the season in addition to two best young rider titles in the Tour du Haut-Var and Tour La Provence, where he was also second overall. In February he won the Classic Sud Ardèche – Souvenir Francis Delpech, and the Drôme Classic before coming fifth in Strade Bianche.

“It’s maybe the biggest victory of my career,” Vakoc said before looking ahead to this weekend’s Amstel Gold Race, where he may now share leadership with his teammates. “I’ve been working a lot on my endurance, last year I did the Giro [d’Italia] which helped me with my condition. I like hard races, I like long races, maybe 250km could be a bit long, but I believe with the condition I have now I can do similar effort on the Cauberg on Sunday.”

After numerous attempts, a small breakaway group containing Emanuel Buchmann (Bora-Argon18), Alberto Cecchin (Team Roth), Sergey Nikolaev (Gazprom-RusVelo) and Oliver Zaugg (IAM Cycling), managed to ride clear. And, from there, the escapees succeeded unbuilding up a maximum advantage of 5:30 over the BMC and Orica-GreenEdge led peloton.

However, the peloton later closed down on the breakaway group, as they headed into the three final 23 kilometer finishing circuits.

Later on, Vakoc found himself in a five-man group that had splintered from an already depleted peloton with around 3.8km remaining.

As the leaders hit the final short, sharp climb in the last kilometer, Alaphilippe quickly went out the back after finishing his hard work, allowing his teammate to make a move with only Gasparotto and Gallopin able to make some kind of effort to hold on.

But the 23-year-old’s power quickly saw him get away, and he was able to ride the last corner and final straight solo with enough time to sit up and celebrate. Italian Gasparotto followed up in second, with Gallopin behind in third after fading on the climb.

As the peloton followed up quickly behind, Bryan Coquard (Direct Energie) was able to steal fourth place in a sprint with Michael Matthews (Orica-GreenEdge)

Matthews’ Orica team had been the dominant squad on the front of the bunch for much of the 203km race, controlling the distance of the day’s main break, which included Oliver Zaugg (IAM Cyling), Emanuel Buchmann (Bora-Argon18), Sergey Nikolajev (Katusha) and Alberto Cecchin (Marchiol–Emisfero), allowing them a maximum gap of just over five minutes early on.

Attacks were frequent in the closing 70km of the race, with several groups rolling the dice off the front, only for the Australian team, including last Sunday’s Paris-Roubaix winner Mathew Hayman, work to reel them in.

That work saw Matthews isolated in the final 16 kilometers as, with his last man Daryl Impey pulling off, and saw the sprinter forced to take up the initiative on the front if he was to bring things back for a bunch sprint to the line, with attacks continuing to fly.

It wasn’t to be though, with Vakoc able to take victory from the attack that finally stuck.