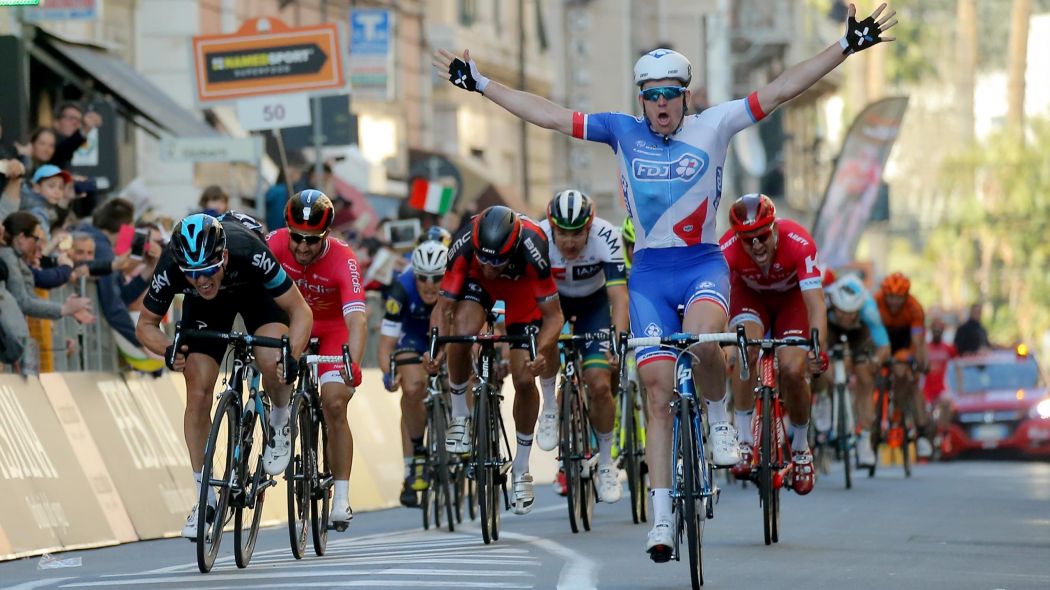 Yesterday’s Milan – San Remo winner, Arnaud Demare, hit back at critics today, after claiming that he took a tow from his team car up the climb of the Cipressa, while attempting to make his back after a crash – strongly denying the allegations.

“I have done nothing wrong,” Demare told the French newspaper L’Equipe. “There are judges in cycling. If I had done something forbidden, I would have been disqualified. Because [Michael] Matthews didn’t raise his arms in victory like me, we don’t care if he took shelter in the caravan. It’s part of cycling and always has been: we profit from the draft of the cars. They block the wind. It is not forbidden.”

The allegations arose after both Matteo Tossato (Tinkoff) and Eros Capecchi, claimed to have witnessed the French rider holding onto his team’s vehicle up the Cipressa.

However, both Demare and his FDJ directeur sportif, Frédéric Guerdon, have denied the allegations from the two Italian riders.

According to a report in Sporza, a race official saw Demare still chasing amongst the teams cars at the top of the Cipressa, while the data on his Strava file appears to confirm this fact.

“I’ve seen this small polemic,” Demare said during and interview on the Italian TV channel Stade 2.

“There really are some bad losers in every sport! I crashed and I had the commissaire’s motor with me. If i’d cheated, I’d have been penalized. Nibali was heavily sanctioned during the last Vuelta, so I wouldn’t have taken the risk of losing the biggest race of my career.”

“This polemic is fair enough. It’s natural that they don’t like seeing a 24 year-old French rider winning their race.”

Initially, Demare had deleted the data from his Strava file, but it was restored later today in order to satisfy critics.

A side-by-side comparison shows he caught back to the peloton between the end of the Cipressa descent and the start of the Poggio, with no apparent spikes in speed.

“I wasn’t obliged to justify things, but I put my data on Strava. You can see that I didn’t touch 80km/h as has been said. That should shut everyone up and I’m going to be fully enjoy my victory which I won with my own legs.”

Despite the allegations, in the absence of proof, race officials have declined to take further action in the case.

“I sense a little jealousy from some of our rivals after our third place in the team time trial at Tirreno,” Demare told L’Equipe.

“I also won a stage at Paris-Nice, as did Nacer Bouhanni.”

“This story won’t spoil my moment of pleasure.”