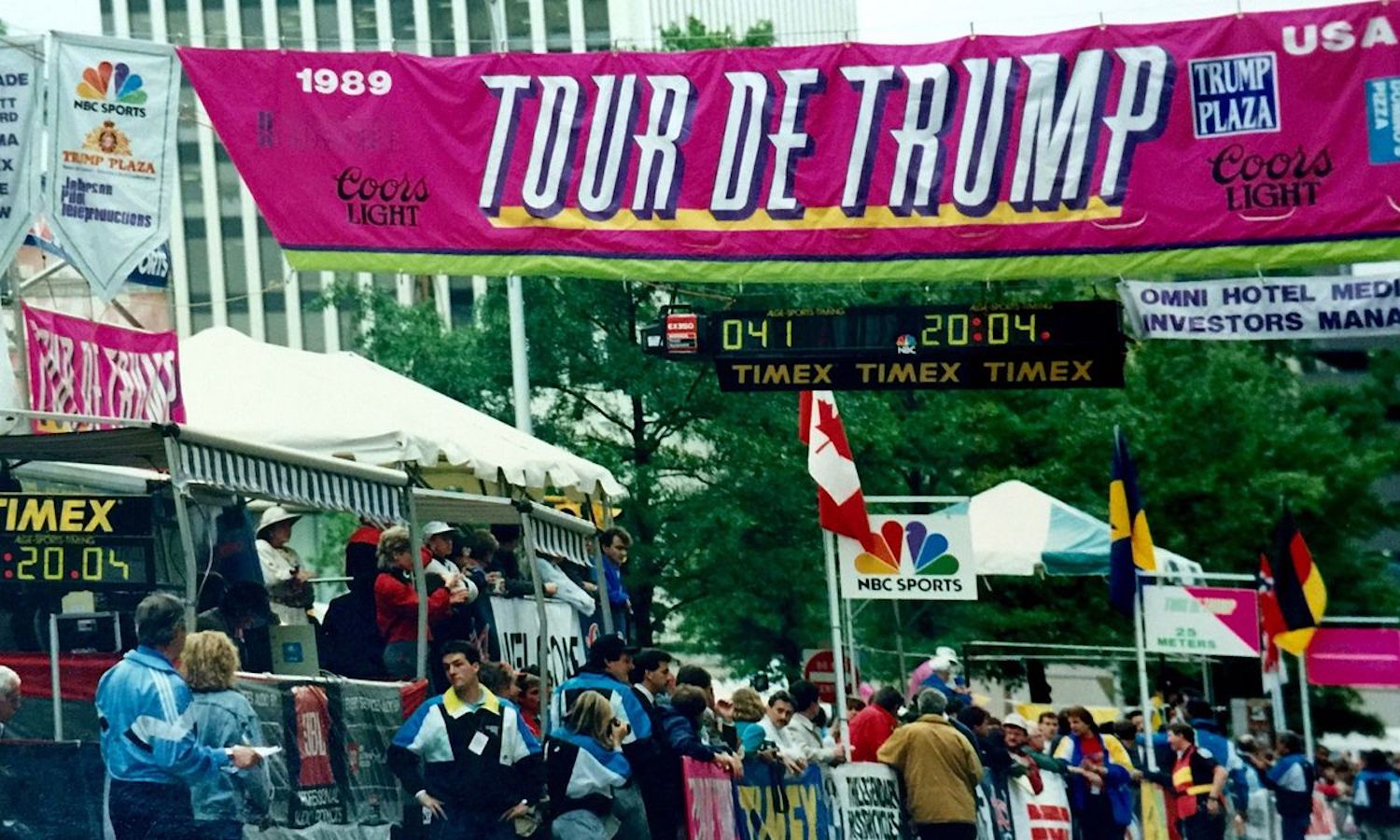 There are some cyclists who think riding a bike constitutes some kind of a political statement, relying on swallow bromides such as their knowledge of craft-beer and the consumption of only organically grown vegetables and ethically sourced coffee as evidence of their political sophistication. Moreover, they hold the belief that their tattoos and body piercings also serve as symbols of moral and political superiority as well. But, for those cyclists who haven’t been completely vaccinated from the truth by disinformation being perpetuated by the toxic morons in the corrupt media corp, bogus identity politics and political hypocrisy glamor, there’s no disputing the fact that Donald Trump was the man who once brought world-class cycling to America.

The idea of creating a world-class cycling race on these shores was initially conceived by NBC reporter John Test, who had covered the Tour de France in 1987. As the story goes, after returning to the United States, he presented the idea to basketball entrepreneur, Billy Packer, who in turn approached the Atlantic City Casino representatives for sponsorship. This almost immediately captured the interest of Trump, who stepped-in with the offer to become the race’s main principal.

At last, after having his name on skyscrapers, casinos, shopping malls and even airlines, the future US president would now see his name stamped on a bike race that would enter upon the cycling world stage.

Sandwiched between the two Grand Tours, the first Tour de Trump was held in May of 1989, enticing the top teams of the peloton with prize money totaling more than a quarter of a million dollars.

In fact, the race was so appealing that it prompted no fewer than eight professional and 11 amateur teams to withdraw from the Vuelta a Espana, leading to a roster of some 120 riders for the inaugural event.

The inaugural Tour de Trump consisted of 10 stages that departed from Albany, New York, which had an overall length of 1,347 kilometers and  spanned across five states, aptly finishing in front of Trump Casino in Atlantic City.

The Norwegian rider, Dag Otto Lauritzen of the US 7-Eleven team, won the first addition of the race ahead of American Greg LeMond, who was coming off of his Tour de France victory just weeks prior.

However, Lauritzen’s victory was not without controversy, as Eric Vanderaerden was expected to win the race after claiming four stages. But, the Belgian rider went off-course during the final stage – costing him the victory.

In the meantime, the Soviet rider Viatcheslav Ekimov, won the first stage of the race (following a prologue time trial).

Nonetheless, the first edition of the race was described as “a smashing success” in Sports Illustrated, which noted, “If you could get past the name, the Tour de Trump, without losing your lunch, and if you could somehow divorce the sporting event from the excess baggage that went with it … what you had was a pretty nice bicycle race”.

Following the first event, Packer wanted to expand the race to take in more states. As a result, the 1990 event started on May 4 in Wilmington, Delaware, a state which Trump considered important for his three casinos in Atlantic City, while also visiting Baltimore before finishing in Boston on May 13.

Entrants for 1990 race included such high profiles riders as previous winner Dag Otto Lauritzen, Greg LeMond, who was coming back from a virus and food poisoning, Steve Bauer, who had finished second in Paris-Roubaix that year, Andrew Hampsten, Davis Phinney, Ekimov, in his first year as a professional, and the East German rider Olaf Ludwig. But, the victory went to Mexican rider Raúl Alcalá of the PDM-Concorde team.

After two editions, Trump withdrew his sponsorship of the race due to financial problems. According to Packer, reflecting on the event in 2016, he and Trump “parted as good business friends”, although he also explained that Trump’s personality and celebrity, as well as the scandals surrounding Trump’s marriage and business affairs, distracted from the event and annoyed European riders in the race.

After Trump withdrew from sponsoring the event, DuPont became the primary sponsor.

Between 1991 and 1995, national amateur teams took part alongside professional teams. The event attracted well-known riders, including a young Lance Armstrong and LeMond once again, as well as several high-profile European-based professional cycling teams.

In 1996, the Union Cycliste Internationale upgraded it to a 2.1 ranked race, meaning that amateurs could no longer compete. This made the race the highest ranked event outside of Europe and the first North American stage race to be ranked 2.1.

The 1996 race was the subject of a number of legal issues, including a dispute over rights to its profits between the race owners, Billy Packer and president of the United States Cycling Federation Mike Plant, which resulted in them suing each other.

To make matters worse, DuPont was involved in a dispute regarding the anti-homosexual employment policies of the local government in Greenville, South Carolina, with the company insisting that the city be excluded from the route.

After 1996, DuPont dropped its sponsorship, which resulted in the race’s demise.