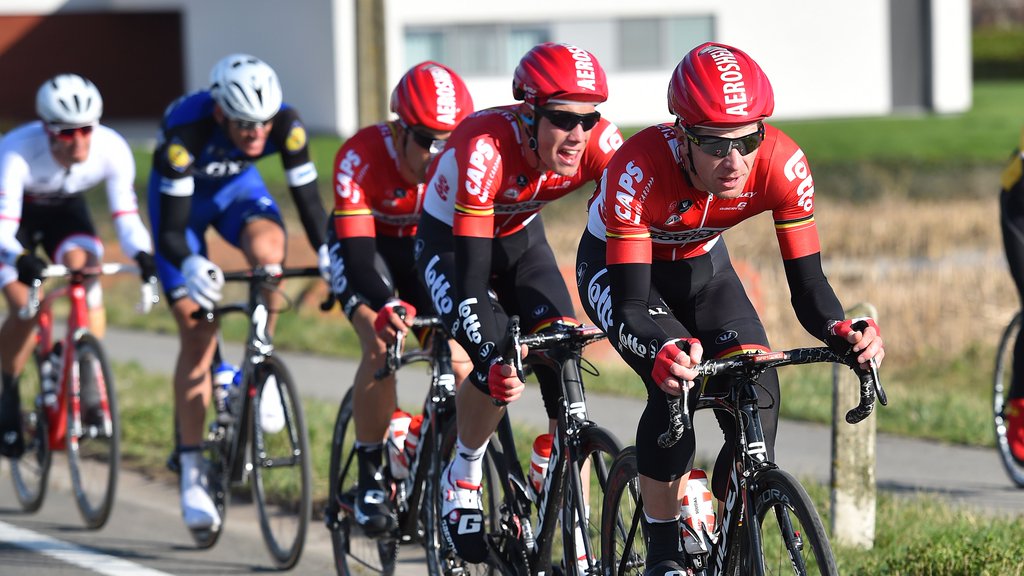 Jens Debusschere (Lotto-Soudal) won today’s Dwars door Vlaanderens in a sprint finale ahead of Bryan Coquard (Direct Énergie), which ultimately came down to a photo finish.

Meantime, Greg Van Avermaet (BMC Racing), who looked poised for a solo victory, faded under pressure from Niki Terpstra (Etixx-Quick Step), who succeeded in chasing the Belgian rider down during the closing 200 meters.

With 80 kilometers still to go, LottoNL – Jumbo’s Mike Teunissen decided to ride clear of the peloton in pursuit of the breakaway group, only to have his efforts joined by Topsport – Vlaanderen’s Jonas Rickaert and Luke Durbridge (Orica – GreenEdge).

Not long after, both Boev and Gougeard were jettisoned by the breakaway, subsequently falling back to join forces with the chase group.

Gougeard would later find himself struggling to stay onboard with the chase, and quickly fell back into the clutches of the peloton, who had succeeded in reducing the breakaway group’s lead to under a minute, as they approached the climb of the Taaienberg – with 52 kilometers to go.

After the Taaienberg, a handful of riders managed to get clear of the peloton, while picking up remnants of the breakaway group, beginning with Teunissen.

The order of the race was reshuffled again after the climb of the Oude Kwaremont, with Van Melsen riding clear of the chase, while only Kirsch remained out front.

The chase would soon come to bear of Kirsch however, as Nikolas Maes, Oscar Gatto, Durbridge, and Dries Devenyns, eventually caught the Luxembourg rider at the crest of the Paterberg – with 31 kilometers remaining.

Despite having four challenging climbs ahead, Van Melsen decided to make a second attempt to ride clear.

Back in the peloton, Van Avermaet et al were busy working hard to claw back the large group that lied ahead of them, eventually reducing their lead to less than a minute.

With 15 kilometers to go, the lead group was now comprised of Nikolas Maes (Etixx-Quickstep), Durbridge, Scott Thwaites (Bora-Argon 18), Giacomo Nizzolo, Loic Vliegen (BMC), Tiesj Benoot (Lotto Soudal) and Van Melsen, who had since been swept up by the chase.

With only the climb of the Nokereberg left, a lack of cooperation in the lead group during the final 10 kilometers, prompted Van Avermaet to launch a solo move from within the peloton.

From there, Van Avermaet soon caught and passed the leaders – quickly opened up a slight gap for himself.

However, just as the Belgian appeared destine for victory, a furious chase by Etixx-Quickstep and Trek-Segafredo brought the curtains down on BMC rider’s hopes.

Trek-Segafredo then led into the final turn with three of its riders at the front, with goal of setting up their man, Fernando Gaviria.

However, the young Colombian rider soon faded, leaving Coquard in perfect position to contest the sprint.

But, the French rider began relishing his victory too soon, as Debusschere came from behind during the final few meters to nix him on the line.

Wiggle High5 Pro Cycling’s Amy Pieters won her third consecutive edition of the Dwars door Vlaanderens today, even after the peloton had caught the 13-rider breakaway group that she had been part of.

“The race was good. I think we did a good job as a team,” Pieters explained. “We all rode well as a team. After the Paterberg we had a small breakaway with Amy Roberts and me, and Dani was close behind us. The later on the small local lap Dani came up to us, and then in the last kilometer and a half Jolien came back with the peloton.”

The race, sometimes known as the “mini Tour of Flanders,” was to take in many of the climbs featured in next month’s race, and it was on the most famous of these – the Oude Kwaremont and Paterberg – where Pieters strength came to form day’s decisive break.

Indeed, the Dutch rider forced a group of 11 riders clear, that also included Wiggle High5 Pro Cycling’s Roberts, while Dani King was also able to join shortly afterwards as the number grew to 13. Belgian Champion D’hoore had suffered a mechanical problem at the foo of the Oude Kwaremont, and so had missed the split, but was able to wait patiently in the peloton as other teams were forced to chase.

With less that two kilometers to go, the peloton finally made the catch, but King still had the speed to lead Pieters around the final corner with 300 meters to go, where she was able to hold-off any late challenges.

In the meantime, D’hoore was able to fend-off Roe for second place.