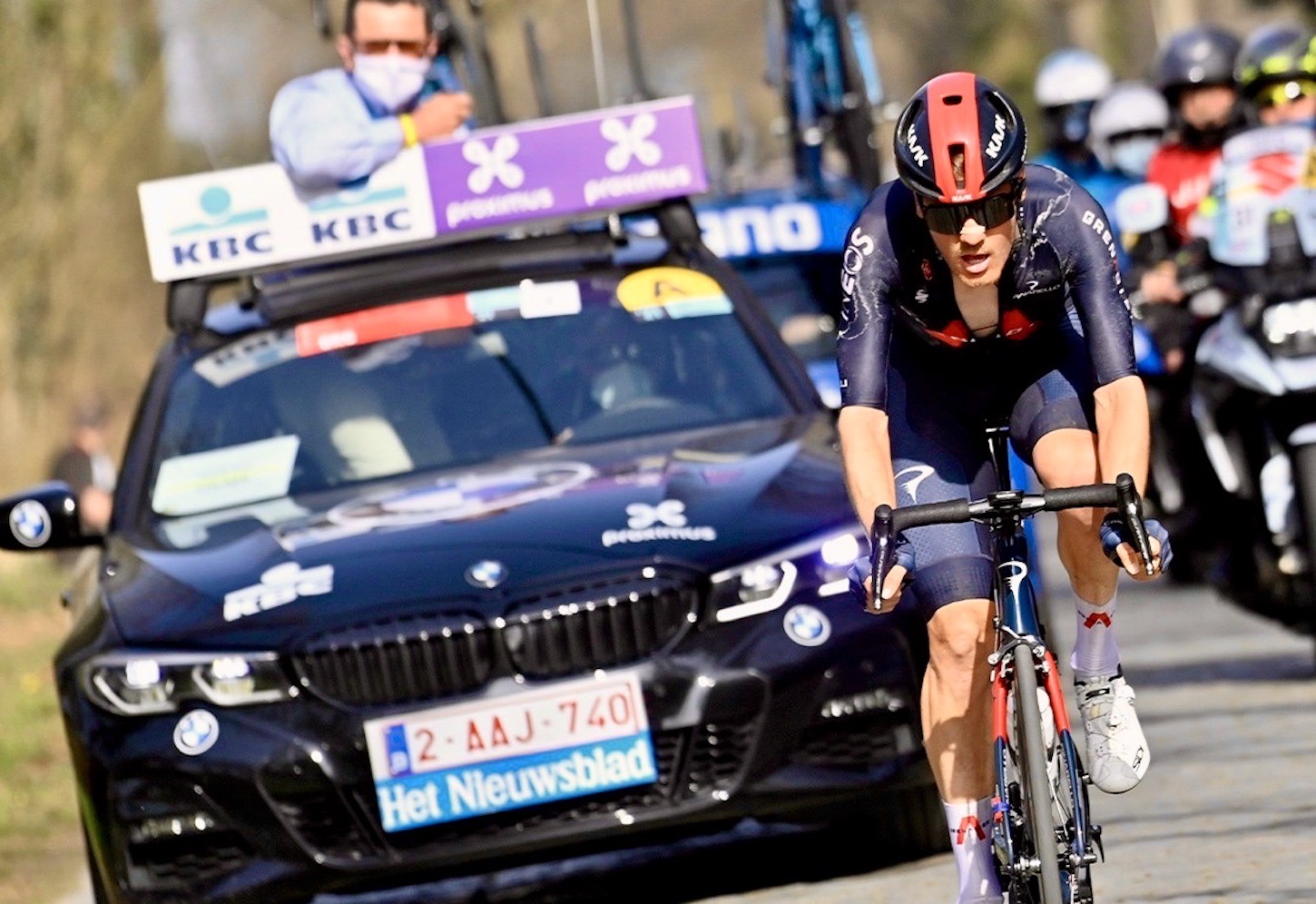 Just days after securing a 1-2-3 victory in the Volta a Catalunya, Ineos Grenadiers celebrated another triumph in today’s Dwars door Vlaanderen, with Dylan van Baarle claiming the race honors with a solo attack with more than 50 kilometers remaining.

Indeed, Van Baarle launched his winning attack along the climb of the Berg Ten Houte with 52 kilometers still to go, a move that would endure for another 132 kilometers, winning the race by 26 seconds ahead of his closest rivals Christophe Laporte (Cofidis) and Tim Merlier (Alpecin-Fenix).

“To win a semi-Classic is super special. It’s high on the list,” said Van Baarle.

“Last year was a difficult year, of course with everything that happened.”

“So, we’re in a good way. We approached the Classics a bit different this year, much more attacking.” “It’s nice, it’s nice to race like this and I’m happy I could finish it off.”

But, there was no reeling in van Baarle, who powered his way over the climbs of the Holstraat and Nokereberg, while steadily increasing his lead over the shorter cobbled sections and on to victory.

In the meantime, race favorites like Mathieu van der Poel (Alpecin-Fenix) and Julian Alaphilippe failed to feature in today’s semi-Classic, especially after the peloton exploded again along the climb of the Knoketeberg with 36 kilometers still left.

After a few insanely fast hours, the race broke loose on the Taaienberg. At about 50 kilometers from the finish Van Baarle accelerated. No one got too close from the back and so the Dutchman soloed to a stunning victory on the Verbindingsweg in Waregem.

The peloton started under a blazing sun in Roeselare and the good weather was clearly a motivating factor. No less than 50 kilometers was covered in the first race hour and the tone was immediately set. The riders rode faster than the quickest schedule for a whole day and that made a classic early breakaway almost impossible. In the end it was Hayter (INEOS Grenadiers), Vermeersch (Lotto-Soudal) and Wallays (Cofidis) who rode together for about a minute.

Yet even their attack did not last too long. First it was Vermeersch who was dropped, but on the Taaienberg Hayter and Wallays also ran out of time. An acceleration of Greg Van Avermaet (AG2R Citroën Team) shattered the peloton. Among others, Stuyven (Trek-Segafredo), Nizzolò (Team Qhubeka Assos), Teuns (Bahrain-Victorious) and Benoot (Team DSM) were positioned in the wheel of the Olympic champion.

From that moment on, one after the other attack was fired. Eventually a group formed that included Stuyven, Wellens (Lotto-Soudal), Van Baarle (INEOS Grenadiers), Kristoff (UAE Team Emirates), Dewulf (AG2R Citroën Team) and Politt (Bora-hansgrohe). In the background, it was Dutch champion Van der Poel (Alpecin-Fenix) who started to shake the tree just after Berg Ten Houte at 52 kilometers from the line. The group broke up, but it was impossible to break away.

With about 50 kilometers to go, Van Baarle went on the attack alone at the front. Behind him, the groups Stuyven-Kristoff and Van Avermaet-Van der Poel regrouped on the Kruisberg, after which they headed for the Trieu. When Van Avermaet attacked there once more, Dutch champion Van der Poel surprisingly had to drop out at 35 kilometers from the finish. World champion Alaphilippe also missed out.

The lone leader Van Baarle was not bothered by all the attacks in the background. He stayed 20 to 30 seconds ahead of the chasing group. Dylan Teuns was the next rider who had to let go. Did the heat take its toll in this 75th edition?

An attack by Stuyven at 18 kilometers from the line brought the chasing group a little closer to the solo leader again. The effort of Stuyven did not break the group and in the background the peloton came closer again meter by meter. On Nokereberg it was Greg Van Avermaet’s turn again. He hurt his companions, but Van Baarle pedaled on calmly in the meantime. His advantage remained around half a minute.

In the final kilometer the peloton caught up with the chasing group. A strong Van Baarle had nothing to fear at that point. His lead was big enough to win solo on the Verbindingsweg. The Frenchman Laporte (Cofidis) could just stay ahead of the sprinting peloton. Merlier (Alpecin-Fenix) won the sprint for third place.