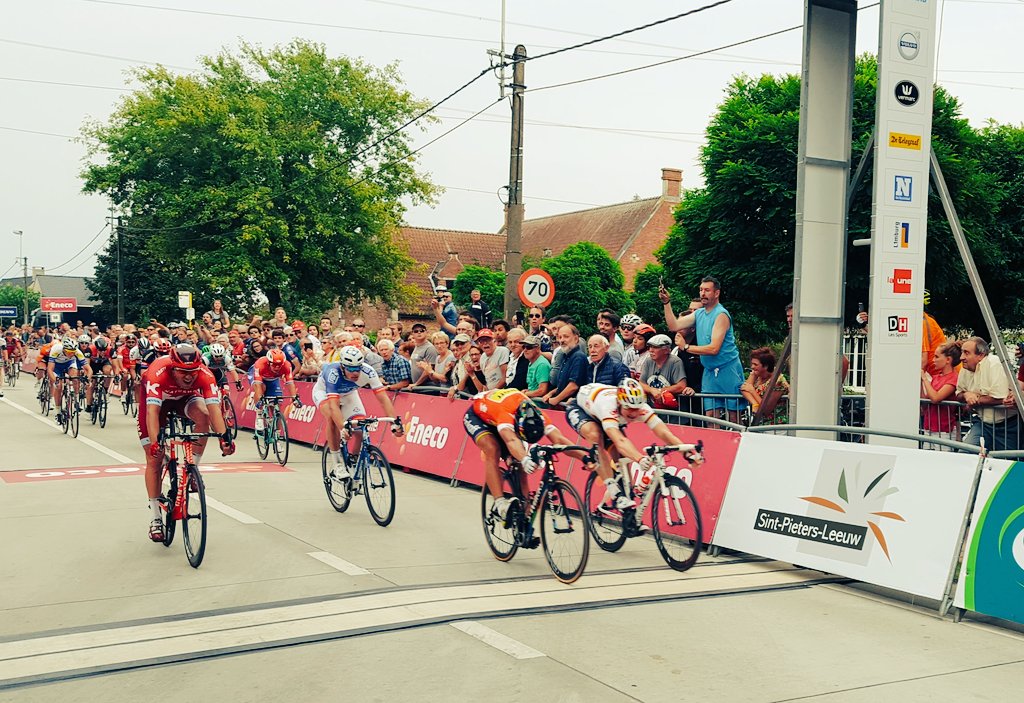 Peter Sagan (Tinkoff) has taken his second stage win in a row in the Eneco Tour. The Slovak sprinted to victory and takes over the lead in the standings.

Peter Sagan (Tinkoff) made it back-to-back stage wins at the Eneco Tour today, taking the leader’s jersey after a photo finish saw him edge out André Greipel (Lotto Soudal) in a hectic stage 4 sprint.

After a battle with Arnaud Demare (FDJ), the World Champion came around Alexander Kristoff (Katusha) and held off a fast-finishing André Greipel (Lotto Soudal) to beat the German in a close photo finish. With the win, the world champion moves into the race lead with a 7-second advantage over Rohan Dennis (BMC).

“I had a little problem with Démare, but that is sprinting. If I did something bad, I’m sorry, but I don’t think I did. I was in my line and he was very aggressive to me.”

Sagan was second overall at the start of the day, trailing time trial winner Rohan Dennis by three seconds, but he collected 10 bonus seconds for his win and now leads the BMC rider by seven seconds, with Jos Van Emden (LottoNL-Jumbo) third overall at 12 seconds.

“I’m happy that I got more seconds from today and we want to make a good team time trial tomorrow, then we will see how we are going. We want to do our best here,” added Sagan.

With the win, Sagan moved into the overall lead with a 7-second advantage over Rohan Dennis. However, he is likely to lose the position in tomorrow’s crucial team time trial where BMC are the favourites. The riders will tackle 20.9km on a illy course that includes two tough climbs in the Limburg region.

excerpts from the Eneco Tour…

The start of today’s stage got underway in the packed town center of Aalter. The first intermediate sprint was located after only 9.4 kilometers, which meant riders contesting the sprint classification had to be alert from the start.

Van Lerberghe won the sprint and added another 15 points to his tally, ahead of McNally(13), Van Ginneken (11) and Van Goethem (9). Stijn Steels grabbed the final two points from inside the peloton, that didn’t pursue the escapees any further. In the peloton Tom Boonen hurt his wrist in a nasty crash. The popular Belgian of Etixx-Quick Step had to abandon the race and went to hospital for further examination.

The lead of the breakaway was steadily reduced, while Frederik Frison (Lotto-Soudal) and Roberto Ferrari (Lampre-Merida) made an unsuccessful attempt to break away from the pack themselves. With 65 kilometers to go the four leaders were caught already.

Reeling in the early breakaway early on, the peloton was going to face more attacks. Tom Dumoulin (Giant-Alpecin) tried but couldn’t break away, while a group with Edvald Boasson Hagen and Rohan Dennis briefly managed to split up the peloton.

Astana riders Andryi Grivko and Dimitri Gruzdev were next in line to attack and took half a minute, which was sufficient to come through the next Primus Checkpoint ahead of the peloton. Tony Martin (Etixx-Quick Step) and Dumoulin countered the attack, but even they couldn’t bridge the gap. Grivko took 9 seconds in the Golden Kilometre with 6 for Gruzdev.

As Dumoulin and Martin were caught, Jasper Stuyven (Trek-Segafredo) did manage to bridge the gap to the leading duo. Stuyven, Grivko and Gruzdev hung on for a few more kilometers, but stood no chance agains the chasing pack. At the finish in Sint-Pieters-Leeuw Sagan won the bunch ahead of Greipel and Kristoff.

With another ten bonification seconds, Sagan takes over the leader’s jersey from Rohan Dennis. Sagan now leads the Australian by 7 seconds in the GC.