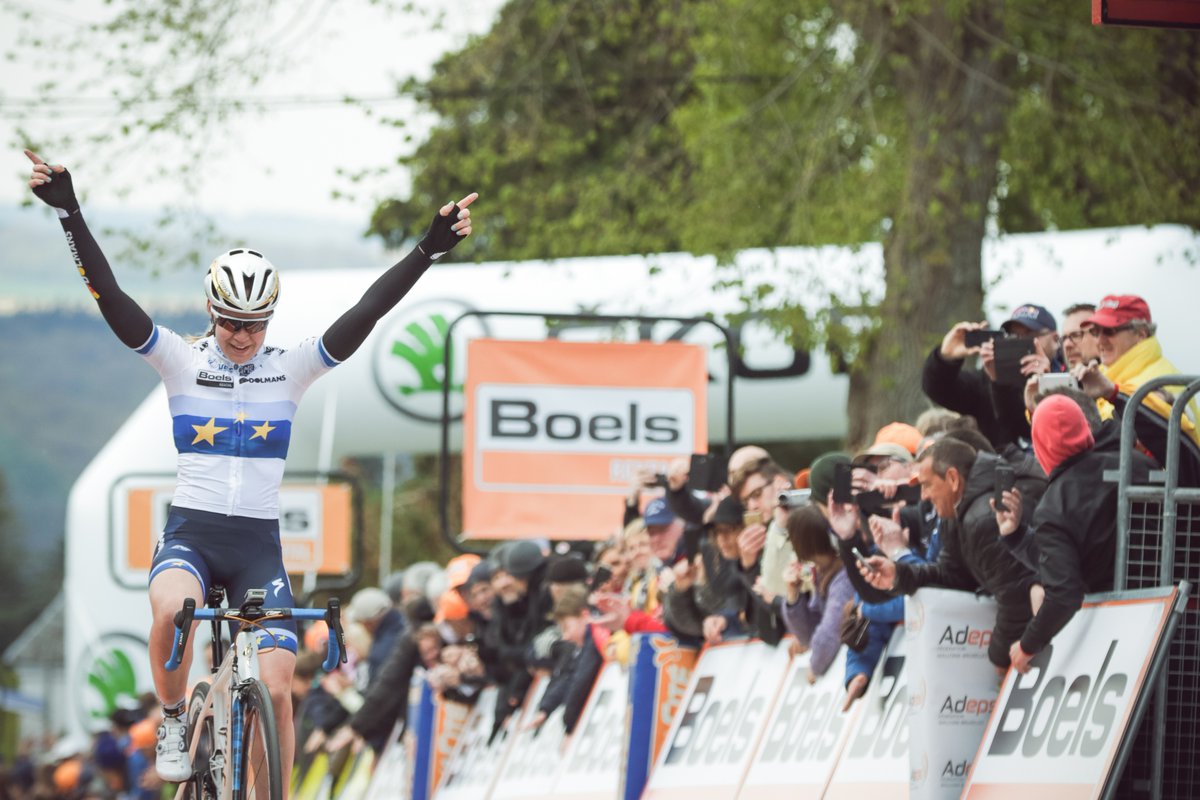 Anna van der Breggen took her third straight Flèche Wallonne win atop Mur de Huy on Wednesday. The Dutchwoman soloed across the finish line 16-seconds ahead of Lizzie Deignan to give Boels-Dolmans Cycling Team another Ardennes 1-2. It is the seventh victory of the year for Boels-Dolmans and the first Flèche victory in team history.

“It’s an important week for the team,” said sport director Danny Stam. “This is a race sponsored by Boels and that makes it pretty clear that it’s a target for the team. We’ve been looking forward to this week all season. Until now we can’t complain.”

“We have to celebrate this one now and have an easy day tomorrow,” Stam added. “Then it’s back with the foot to the floor for Liége.”

Like with Amstel Gold Race, Van der Breggen’s victory was the result of strong team tactics and strength in numbers. Kasia Niewiadoma (WM3) attacked over the top of the penultimate climb and only Van der Breggen and Deignan could follow.

“On the flat section between Côte de Cherave and the Mur, I put in an attack,” said Deignan. “Kasia follow and Anna countered. I saw Kasia’s face and I thought: ‘Right. I think we’ve won this one.’ ”

Van der Breggen extended her gap as she powered her way up the Mur de Huy. One hundred and fifty meters from the finish, Deignan attacked Niewiadoma to take second.

“I have to say thanks to Lizzie,” said Van der Breggen. “She is riding great at the moment. I have two great victories now, and Lizzie is in great shape also. A big thanks to Lizzie and the rest of the team. I can do this because the whole team is strong.”

A 139-rider peloton set off from Huy under a blue sky. Despite the sun, it was a cold morning with temperatures only a few ticks above zero. Several riders tried to slip away in the opening kilometers, but a largely intact peloton crested the top of the Côte d’Ereffe, the first of seven climbs on the 2017 Flèche Wallonne menu.

Katia Ragusa (BePink) and Sofie de Vuyst (Lares Waowdeals) slipped away around the 20 kilometre mark. The pair were soon joined by Allie Dragoo (Cervelo Bigla) and Anisha Vekemans (Alé Cipollini). The four out front shared the work to extend their advantage to three minutes at the mid-point of the race.

“It was a strange race,” said Van der Breggen. “The beginning was really quiet and a little hectic but nothing happened that much. You know it’s going to explode, and you’re waiting for it.”

The first signs of the fireworks to follow came when Boels-Dolmans sent Jip van den Bos and Kaisa Pawlowska to the front. Thirteen kilometers later, the gap had fallen below a minute.

“Jip and Kasia did a good job until the bottom of the Mur de Huy the first time to keep the group rolling and to keep the gap from growing,” said Stam.

Boels-Dolmans was well-positioned the first time up the Mur with Van der Breggen, Deignan, Karol-Ann Canuel and Megan Guarnier all in the top 20. Thirty-five riders survived the first major selection.

“Megan and Karo did an excellent job on the Col d’Effree,” said Stam. “They made it hard and from that point the group was smaller.”

Between the Col d’Effree and Côte de Cherave, Canuel and Guarnier continued to apply pressure.

“They would make it really hard but when someone else would attack, they’d get dropped,” said Deignan. “They’d claw their way back, put on the pressure and get dropped. It was brutal. They led us into the second to last climb and roughly 25 riders were left.”

“It was the perfect situation to be away with three and to have two teammates,” said Van der Breggen. “It might have looked easy, but it was not. It was a really hard race.”

Van der Breggen wasted no time in launching the race-winning move. Playing off Deignan’s attack, Van der Breggen accelerated between the final two climbs. She immediately gained a small gap that she was able to extend before the finish.