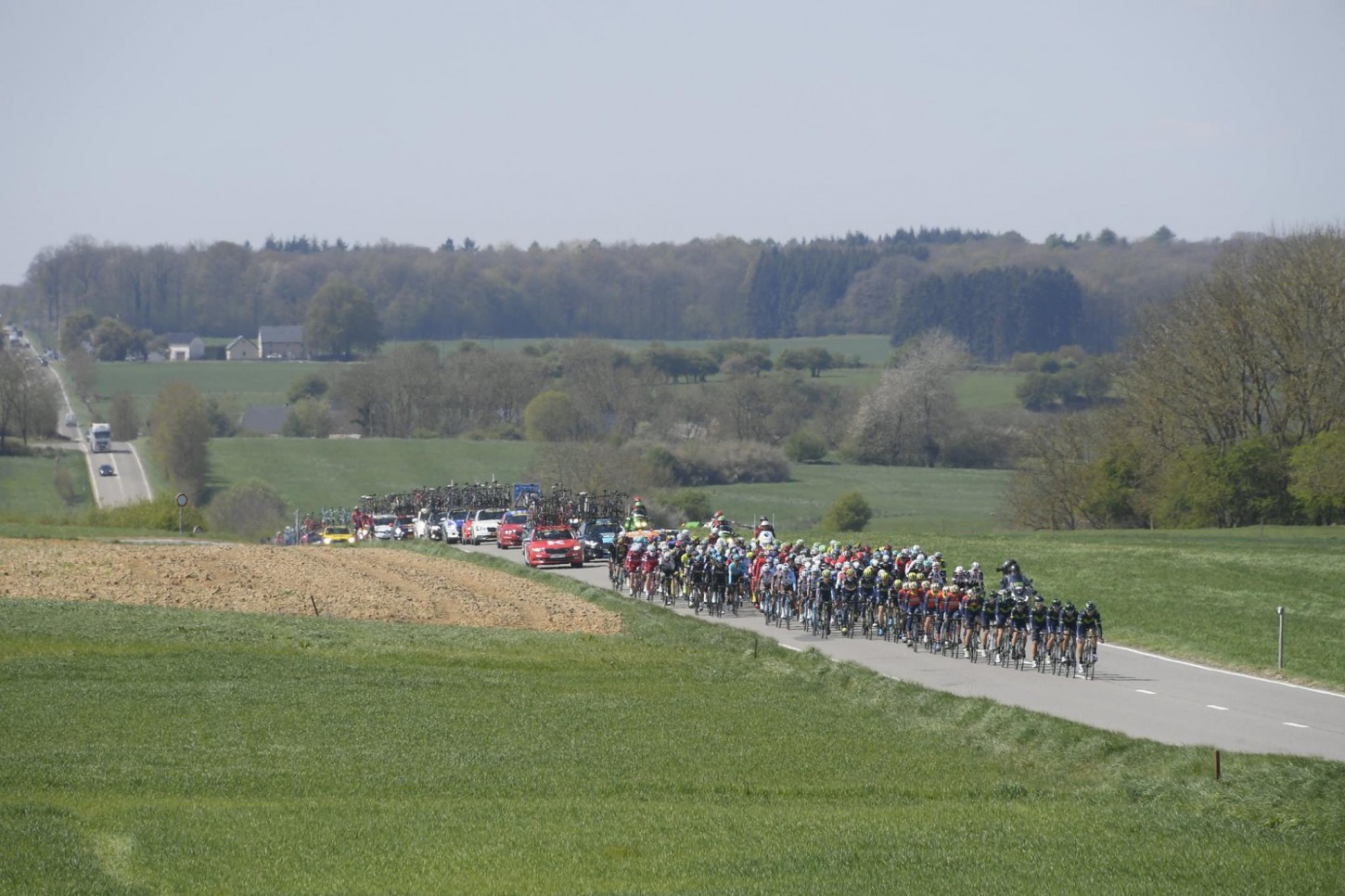 Valverde succeeded in fending-off a challenge from Dan Martin (Quick-Step) atop the Mur de Huy, to seize the race honors, while Dylan Teuns (BMC) held-off Sergio Henao (Sky) to claim the final spot on the podium.

From there, the escapees went on to establish a maximum advantage of nearly six minutes over the peloton.

Back in the chase, Movistar continued to work in earnest in an attempt to reel back the breakaway group and keep pre-race favorite Valverde in contention.

Indeed, once the race hit the first climb of the day, the Cote d’amat, the breakaway group’s lead had been cut in half, while Movistar continued to keep the pace high alongside Orica-Scott and Lotto-Soudal.

The first ascent of the Mur de Huy came with 58 kilometers remaining, which saw the breakaway group reduced to just Guillemots, Bagot, and Padroni, who were clinging to just a minute and a half lead.

The next action came with 46 kilometers to go, when BMC Racing’s Alessandro De Marchi attacked on the Cote d’Ereffe, pulling a group clear including Carlos Betancur (Movistar). That attack came to nothing, but did inject enough pace to all but catch the remains of the break.

A few kilometers later and De Marchi was on the attack again, leading onto the penultimate ascent of the Mur de Huy with a 20 second advantage.

The peloton was led up the 22 per cent gradients by Quick-Step Floors, with Bob Jungels attacking once the road flattened out.

The Luxembourg champion quickly made his way across to De Marchi, with the two men having a lead of around 20 seconds with 20 kilometers and three climbs remaining.

Despite hard chasing from Orica-Scott at the front of the peloton, De Marchi and Jungels were able to eek out an extra few seconds of an advantage.

However the gap wasn’t enough for Jungels, who decided to go solo, taking a gap of 50 seconds on the penultimate climb, the Cote de Cherave, with six kilometres remaining.

An unsuccessful attack from Rafal Majka (Bora-Hansgrohe) brought Jungels’ lead down, and by the base of the final climb of the Mur de Huy his lead was little more than 20 seconds.

The catch was inevitable as Team Sky and Movistar led the peloton on the steep slopes of the Mur, before Valverde jumped clear with an irresistible burst of speed.

From there, the Movisar rider quickly opened up a significant gap over the chasers, and although Dan Martin was able to close in the final hundred meters after initially being positioned too far back, he was not able to prevent Valverde from taking his fifth victory in La Flèche Wallonne, and his fourth win in a row.