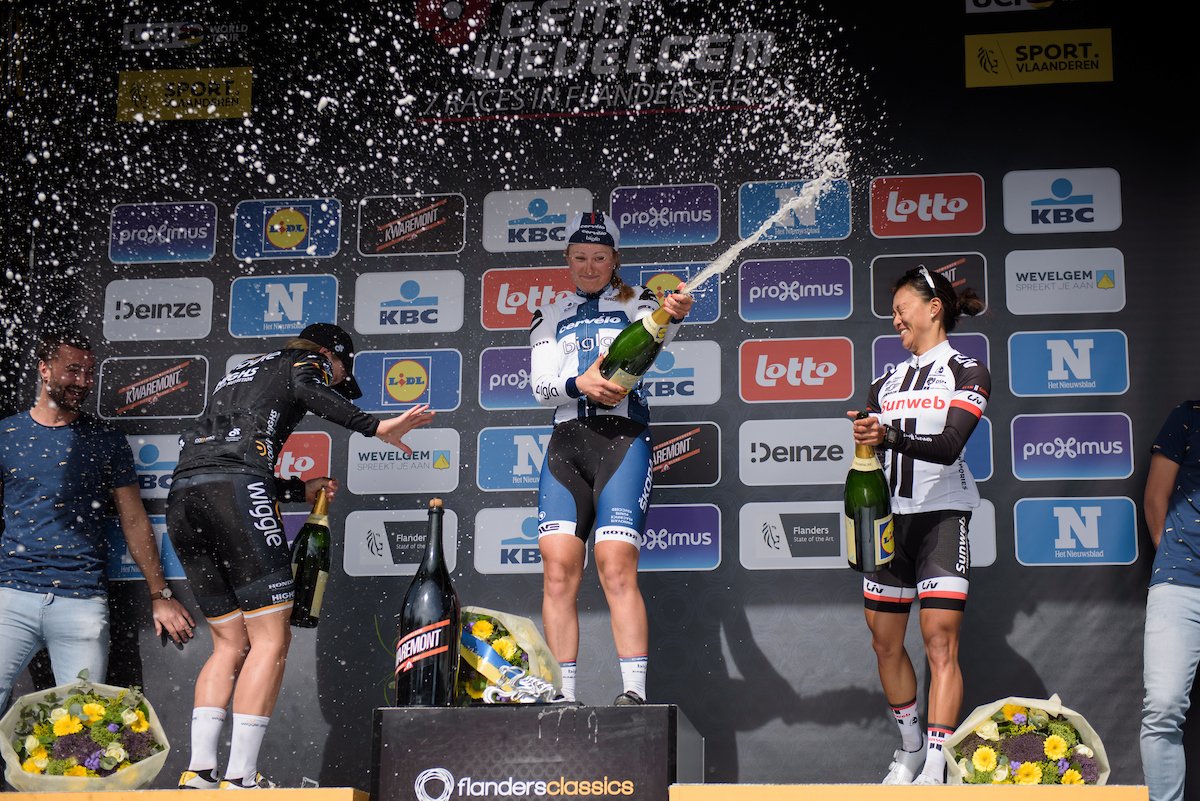 The result comes after the inform Lepistö won Dwars door Vlaanderen on Wednesday. The victory is the team’s first ever in the WorldTour in what is the best start to the season in its history with four victories to date.

“This race was my goal,” a delighted Lepistö said after the podium celebrations. “I was focussed on winning it. It’s a race that suits me and last year I was close but made a mistake and I told myself that won’t happen again. So today I made sure I was in the front. Flanders is Flanders and anything can happen but this was my goal and we agreed to target today and I got it. I am really satisfied. Three weeks ago I told Christina [Pertchold] I want to win this race, she texted me yesterday and said keep your promise.”

“We had five girls in the front group. They did an amazing job. Stephie [Pohl] did the leadouts to the Kemmelberg, Marie [Vilmann] our climber here in Flanders attacked after the climbs to put pressure on the group, Cecilie [Uttrup Ludwig] waited for me in the climbs and brought me to the front because I wanted to ride them at my own pace. She covered a million attacks. Lisa [Klein] is my tandem, she is always with me. Ashleigh [Moolman-Pasio] coming back from injury and being in all the attacks and keeping me calm. She always has the right things to say, telling me to relax, it’s not my turn to go into a group. Thomas in the car had a really good tactic and believed in us. This is another team victory.” Lepistö concluded.

The peloton stayed mostly together for the first 70 kilometers of today’s race, until they arrived at the first hilly sector.

The first ascent of the Kemmelberg split the peloton slightly, while the descent toward the Monteberg did further damage.

During the second climb of the day, three distinct groups came to form with 20 seconds separating the first two.

The splits were small enough for a re-grouping to occur before the the day’s final climb the Baneberg.

From there, roughly 50 riders reached the bottom of the second ascent of the Kemmelberg together.

Although a few riders were unable to maintain contact over the Kemmelberg-Monteberg combination, the group largely stayed together. With the hills finished, the reduced bunch had only flat roads and some wind to contend with en route to Wevelgem.

Marie Villman, Lepistö’s teammate, launched an attack with 25 kilometres remaining. She gained a maximum of 10 seconds before the peloton brought her back. Next, a group of six tried to slip away. They too were neutralized by the peloton.

Anna van der Breggen (Boels Dolmans) and Giorgia Bronzini (Wiggle High5) were the next to go up the road. However, neither group could open up a gap of more than 400 meters.

As the Luxembourg rider curtailed leading the pace, the others did, too, quickly spelling the end of the move.

The duo pair were caught with two kilometers still to go however, while the reduced bunch readied for the sprint.

Lepsstö planned her final move to perfection, as the Finnish rider came away with the win.