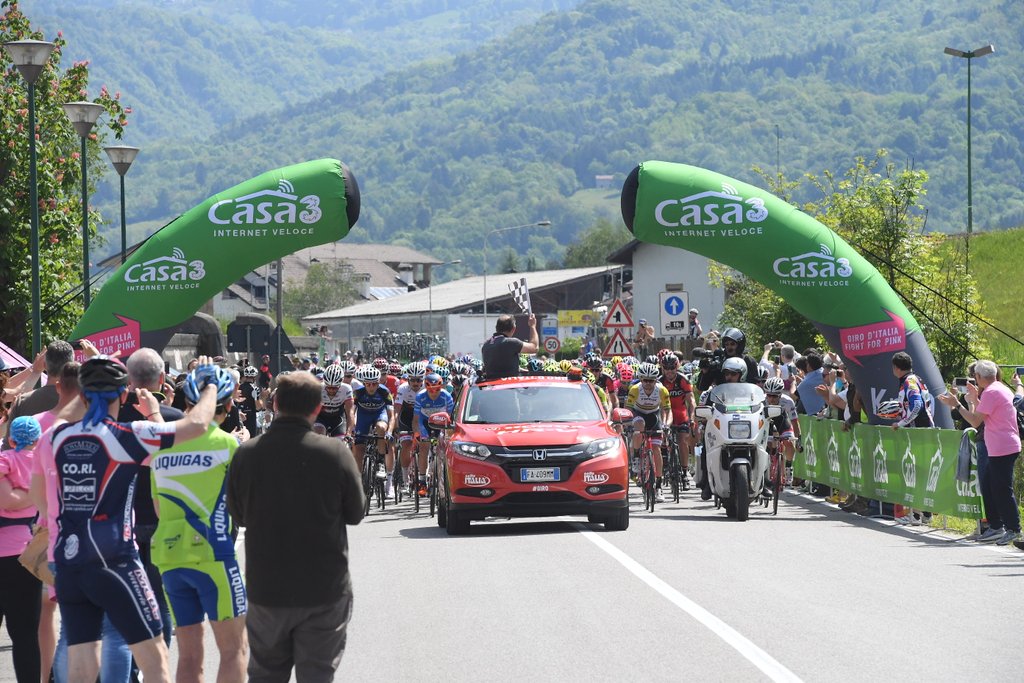 From there, the duo reached Preidler, who was the last of the breakaway riders, before the trio finally caught the lone leader Darwin Atapuma (BMC Racing).

As result of today’s stage, Dutchman Kruijswijk took over the maglia rosa, after race leader Andrey Amador was dropped along the final climb of the day.

Today’s huge 37-man breakaway group lasted until mid-point in the stage, before splintering into several groups, while Orica-GreenEdge’s Ruben Plaza decided to head out on his own.

However, the Spanish rider was eventually reined in by Kanstantin Siutsou (Dimension Data) and Atapuma, with the Colombian rider subsequently attacking and setting out on his own.

Back in the peloton, Nibali decided to launch an attack on the Passo Valparola, immediately distancing the maglia rosa, Andrey Amador, who had also been dropped on the Passo Giau, along with his Movistar teammate Alejandro Valverde, who had no answer for the Italian rider’s attack either.

But, it later became Nibali’s turn to get dropped, as Chaves and Kruijswijk upped the pace.

From there, the duo eased away from the Astana rider and later bridged their way to the trio ahead.

The game was up for Valverde and Amador however, who saw their time gap to the leaders keep extending in the final 30 kilometers, with the Movistar leader dropping three minutes to Chaves.

Back up front though, it appeared as if Atapuma would ride away with a solo victory, but the determined Kruijswijk, Chaves and Preidler reeled him in after a long day out front.

Preidler then looked to ease to the finish line, but Chaves held enough in reserve to sprint past the Austrian rider, who made his move too early.

Kruijswijk now leads from Nibali by 41 seconds, with Chaves moving up to third. The gap to Valverde now sits at over three minutes.