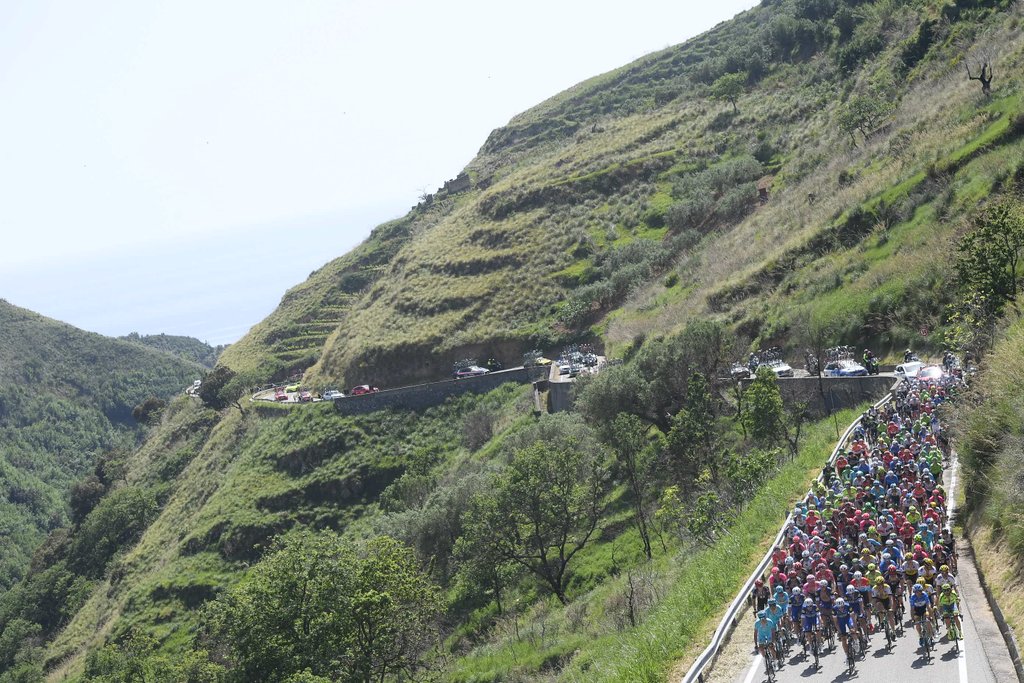 Diego Ulissi (Lampre-Merida) won stage 4 of the Giro d’Italia today, after riding clear during the final climb of the day, to claim a solo victory in Praia a Mare – five seconds ahead of his closest rivals Tom Dumoulin (Giant-Alpecin) and Steven Kruijswijk (Team LottoNl-Jumbo).

Meanwhile, race leader Marcel Kittel (Etixx-QuickStep) was distanced twice during the stage, ultimately finishing several minutes down on the leaders.

As a result, the German rider was forced to concede his maglia rosa to Dumoulin, who previously held the jersey after winning stage 1.

From there, the escapees went on to establish a maximum advantage of around three minutes, before being reclaimed by the peloton at the 50 kilometer mark.

Stefano Pirazzi (Bardiani – CSF) and Damiano Cunego (Nippo – Vini Fantini) then proceeded to attack on the climb to San Pietro, subsequently opening up a slight lead of more than a minute, while the Ag2r La Mondiale duo of Guillaume Bonnafond and Axel Dumont stuck out in pursuit.

However, with the peloton fast on their heels, De Marchi and Conti decided to attack again.

The escapees were eventually joined by nine other riders, where Kittel was later dropped during the final 15 kilometers.

With 10 kilometers to go, the lead group had opened up a gap of more than half a minute over the chase, as they tackled the climb of the Via del Fortino.

But, the steep gradients of the climb would later whittle down the group to just six riders, where Ulissi made his winning move.

With five kilometers to go, Ulissi had opened up a 15 second lead over the chase, as Team Bardiani rode in earnest to try and reel in the Lampre-Merida rider.

As they approached the final two kilometers, Astana’s Michele Scarponi tried an attack to no avail, while Bob Jungels attempted the same.

However, a determined Ulissi managed to remain outside the grasp of anyone during the closing kilometer to seize the stage honors.

Meanwhile back in the chase group, Dumoulin managed to ride clear, along with Kruijswijk – ultimately making up enough lost time to reclaim the overall race lead.