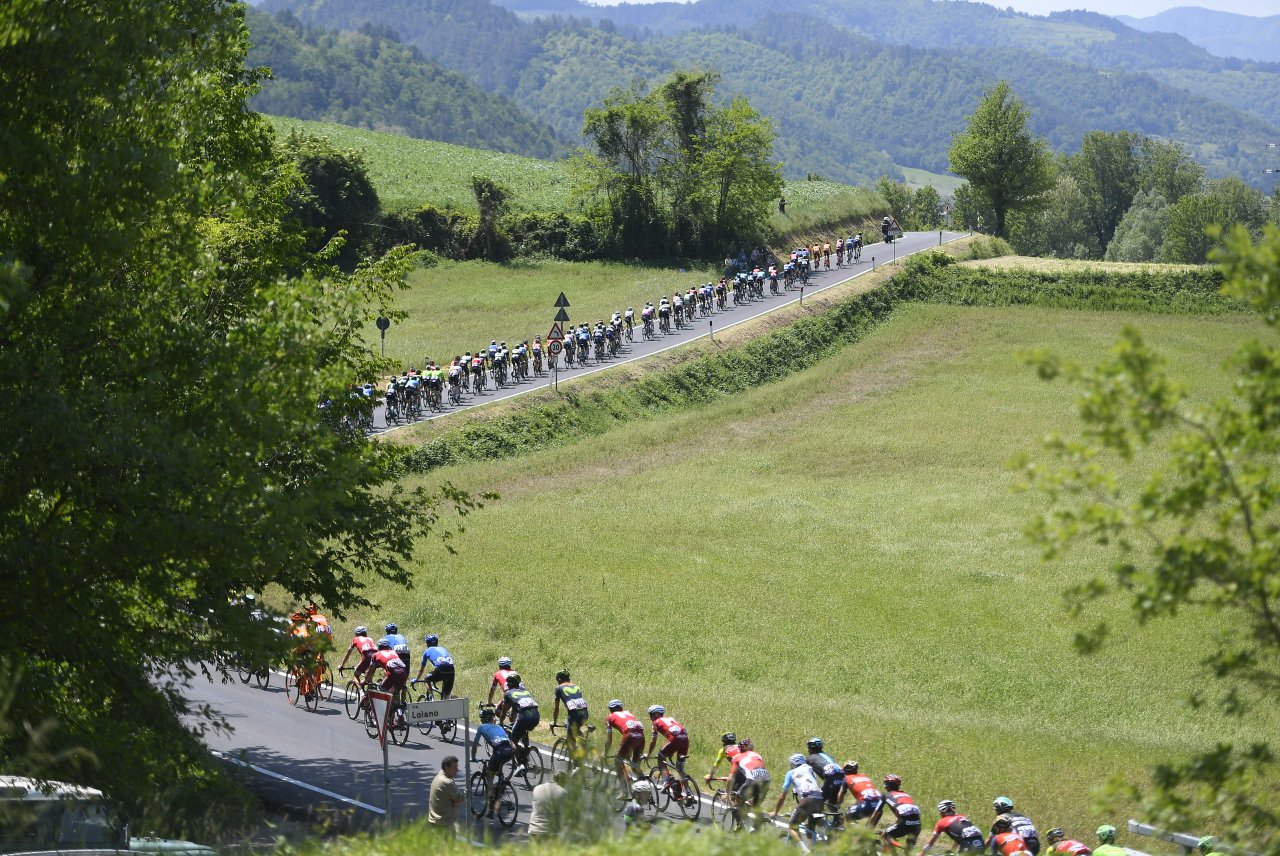 Fernando Gaviria continued his dream Grand Tour debut with a third win in the Giro d’Italia after dominating the bunch sprint at the conclusion of stage 12 in Reggio Emilia. Felix Lowe rounds up the day’s action.

Once again benefiting from a textbook lead-out by his Quick-Step Floors team-mate Max Richeze, Gaviria powered clear to win the 229km stage from Forli – the longest of the race – ahead of Italy’s Jakub Mareczko (Wilier-Selle Italia) and Ireland’s Sam Bennett (Bora-Hansgrohe).

A third victory on the 100th edition of the Giro also saw Gaviria, 22, extend his comprehensive lead in the maglia ciclamino points classification.

Asked whether he was the best sprinter on the race, Fernando Gaviria remained modest and respectful of his elders.

“I’m not sure I’m the best of the Giro d’Italia. The best sprinter in this Giro is Andre Greipel. He’s won more stages in his career than me and won more stages of the Giro. I’ve got maybe better form than him but he’s the better sprinter.”

Regarding Richeze’s puncture near the finish, Gaviria added: “ I was worried when my lead-out man Maximiliano Richeze had a flat tyre because the peloton was riding very fast at that point. But he came across and it was perfect.”

Passing through Emilia-Romagna, the region fabled for balsamic vinegar, parmesan cheese and Lambrusco sparkling wine, the longest stage of the race was a gourmand’s paradise – but offered little for fans to feast their eyes over.

With the stage always destined for a bunch sprint, any breakaway would be onto a hiding for nothing. Nevertheless, two riders – Russia’s Sergey Firsanov (Gazprom-Rusvelo) and Italy’s Marco Marcato (UAE Team Emirates) – broke clear shortly after the gun, to be joined shortly after by a second Italian, Mirco Maestri of Bardiani-CSF.

The advantage of the three leaders swelled to a maximum six minutes after the second of two categorised climbs – by which point, Basque climber Fraile had done enough to leapfrog Slovenia’s Jan Polanc (UEA Team Emirates) in the battle for the blue jersey.

After Polanc attacked near the summit of the Cat.2 Cola di Casaglia, Fraile reacted fast to secure four extra points over the summit for fourth place – two more than his rival. Fraile added another point when leading the peloton over the Cat.3 Valico Appenninico to consolidate his lead in a climbers’ competition that he won at both previous two editions of the Vuelta a Espana.

With the uphill distractions out of the way, the focus shifted to the expected bunch sprint as the teams of the fast men came to the front of the pack to lead the chase.

Firsanov and Marcato were reeled in once the pack had passed through Modena while Maestri, who heralds from the nearby town of Guastalla, defied the returning pack in a bid to put on a good show for his local tifosi.

The 25-year-old Maestri was caught inside the final seven kilometres as the teams of the GC favourites came to the front in a bid to keep their men out of trouble. Once the magic three-kilometer marker was passed, the teams of the sprinters wrestled back control – only for Albanian Eugert Zhupa (Wilier-Selle Italia) to zip off the front in a bold bid to upset the apple cart.

Like Maestri, Zhupa was hoping to give something back to the local fans – the 27-year-old having moved to Reggio Emilia with his family as a child. Zhupa was reeled in, however, as the riders passed under the flamme rouge at a point when Bennett’s Bora-Hansgrohe seemed well in control.

But Gaviria – under the guidance of the excellent Richeze, who himself had fought back in contention after picking up a puncture with 18km remaining – zipped to the front before powering past his rivals.

With the host nation still without a win, Polish-born Mareczko came the closest to ending Italy’s barren run – but the Selle-Italia sprinter never really troubled Gaviria en route to his second runner-up spot on the race. For his part, Bennett had to settle for a third third-place finish in a frustrating, yet encouraging race.

Germany’s Phil Bauhaus (Team Sunweb) and that man Richeze – sitting up to celebrate Gaviria’s win – completed the top five on a day Quick-Step once again asserted their authority on the race.

Despite Orica-Scott’s hefty role in the chase, there was no sign of stage 7 winner Ewan in the final as the 22-year-old Australian came home six seconds down in 82nd place. It was an off-day for German national champion, too, after Greipel failed to hit top gear and came home behind Ryan Gibbons (Dimension Data) and Sacha Modolo (UAE Team Emirates).