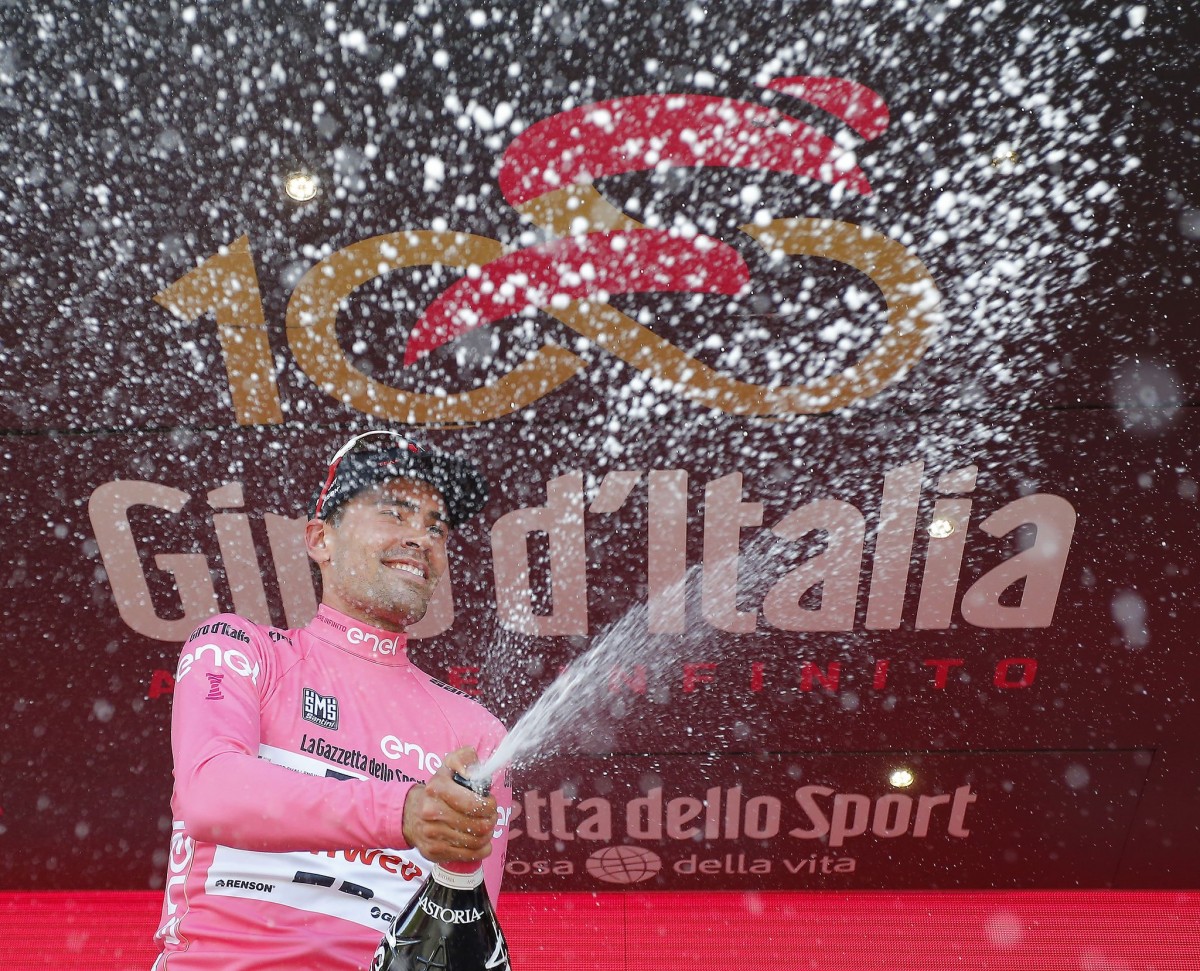 Tom Dumoulin produced a magnificent ride to win Stage 14 of the Giro d’Italia and extend his overall lead in the general classification at the Oropa Sanctuary in the foothills of the Alps. Felix Lowe rounds-up the action.

The Dutchman rounded fellow Russian Ilnur Zakarin on the cobbled home straight of the race’s “Montagna Pantani” to claim his second victory of the Giro and collect 10 bonus seconds, with Spain’s Mikel Landa in third and a tiring Nairo Quintana of Colombia in fourth.

eam Sunweb’s Dumoulin, 26, extended his lead over Movistar’s Quintana by 24 seconds to 2:47, with Frenchman Thibaut Pinot – the FDJ rider who finished the stage in fifth place – in third at 3:25.

Despite Dumoulin’s victory and Quintana’s final-kilometer slump, it was the pint-sized Colombian climber who first broke clear of the thinning pack of main favorites with just over three kilometers remaining of the 131km stage from Castellania.

But a rousing reply from the towering Dumoulin saw the composed maglia rosa keep his calm and lead a select chasing group back to the wheel of the lone leader.

After defending champion Vincenzo Nibali (Bahrain Merida) was distanced, Dumoulin caught Quintana and attacked instantly – taking Katusha-Alpecin’s Zakarin with him. Team Sky’s Landa dug in with Quintana and the quartet approached the finale with Dumoulin driving a fast pace.

Zakarin made what looked to be the decisive dig on the home straight – but once Dumoulin saw that Quintana had dropped back, the race leader summoned the strength to leap out of the saddle, pass Zakarin and deliver a psychological blow to his rivals.

While Zakarin missed out on a second career stage win in the Giro, the 27-year-old moved up to fifth place from tenth on GC ahead of the all-important final week of the race.

Having seized the maglia rosa by virtue of his superb time-trailling skills last week, the Dutchman put in just as convincing a display on Saturday’s uphill finish to remind his rivals of his impressive all-round ability and cement his place as the big favourite to win the 100th edition of the Giro.

It wasn’t so much Dumoulin’s victory – the first by a non-Italian at Oropa – that was so commendable as the way he rode back into contention after being distanced early on the climb – the sign of a mature rider who knows exactly where his strengths and weaknesses lie.

Once the riders had rolled out of Castellania, the birth town of Fauso Coppi, there was an extraordinary fight between would-be escape artists vying to be the daily cannon fodder for the peloton.

The break opened up a maximum gap of 2:25 over the peloton as the race crossed the flat rice fields of Piedmont and headed towards the snow-capped Alps.

As expected, it was shortly all over for the three escapees – and once they were swept up inside the final 20km, the battle commenced as the pack approached the town of Biella at the foot of the final climb.

Italy’s Diego Rosa opened up a small gap at the start of the climb but the Sky rider was caught with 6km remaining. Spanish veteran Igor Anton (Dimension Data) was next to roll the dice but he, too, was pegged back once Zakarin put in the first attack from the GC favorites.

Zakarin rode clear with Quintana and Domenico Pozzovivo (Ag2R-La Mondiale) inside the final 4km while the likes of Steven Kruijswijk (LottoNL-Jumbo), Bauke Mollema (Trek-Segafredo), Pinot, Nibali and Dumoulin dropped back.

Another attack from Quintana saw the Colombian surge clear but Dumoulin managed to ride back into contention in a chasing group that also contained Nibali, Landa, Zakarin and British youngster Adam Yates (Orica-Scott).

Fans flocking to one of the largest religious shrines in the Alps ran alongside Quintana just as Dumoulin dragged back the chasing group. And once the Dutchman drew level – and saw that both Nibali and Yates were in trouble – he stepped on the pedals and forced yet another selection.

On the climb where the Vespa was tested for the first time, Tom Dumoulin tucked into his notorious time trial position and motored towards the final kilometre. And while it was Zakarin who drew first blood on the cobbles, the sight of Quintana having a rare wobble was enough of encouragement for Dumoulin to twist the knife – and with it take his second win of the race.

Quintana won’t be happy with his performance, but others saw their chances take a far bigger knock in Stage 14 – most notably the Dutchman Mollema, who finished 1:44 back to drop out of the top three to sixth. Nibali, too, looked on course to make some in-roads before the defending champion faded considerably in the closing kilometres to finish seventh and drop to 3:40 behind the imperious Dumoulin.

For his part, Dumoulin moved to the top of the king of the mountains standings with a two-point lead over Omar Fraile of Dimension Data. But with the Dutchman increasingly pretty in pink, the Basque Stage 11 winner will continue to wear the maglia azzurra.