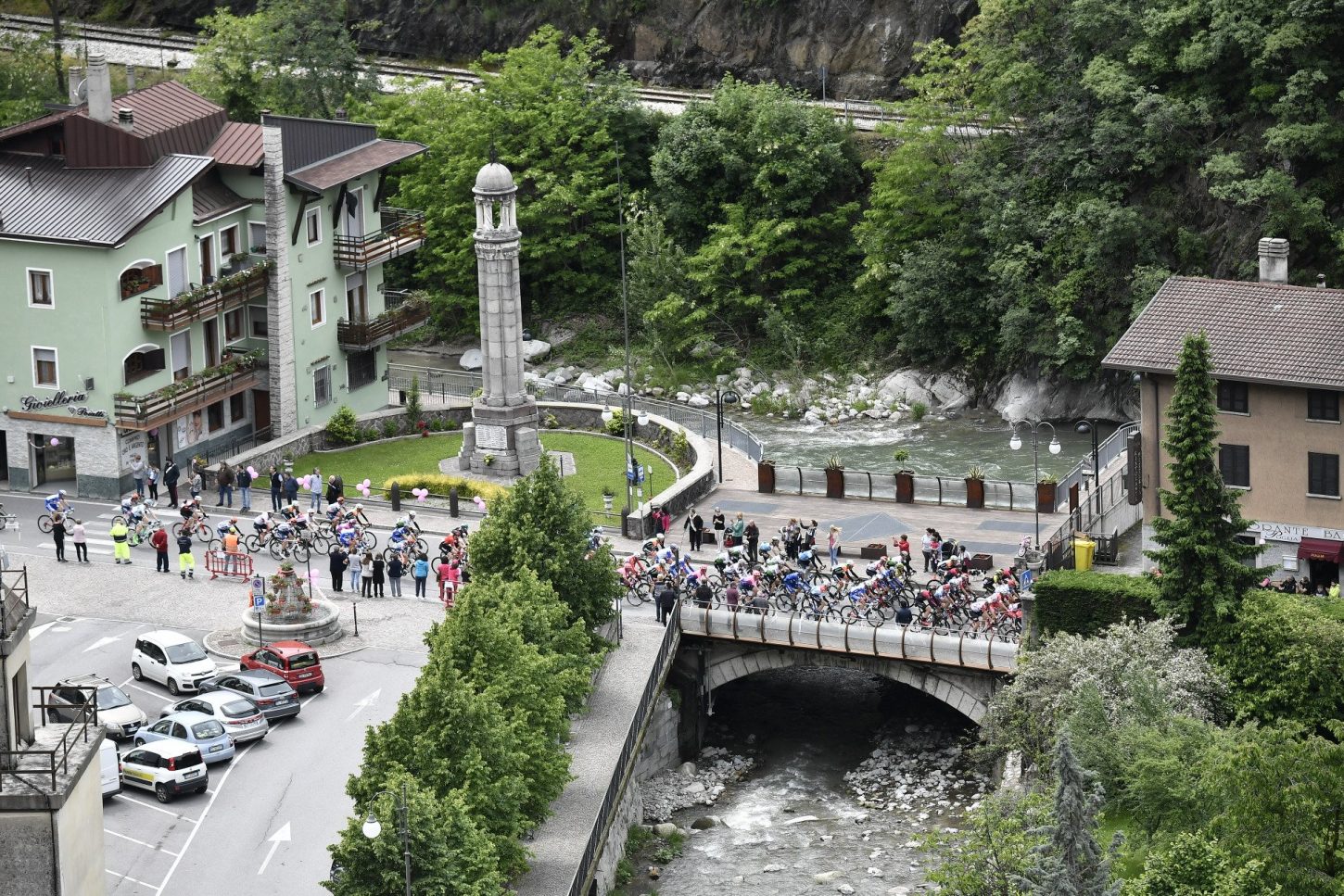 Giulio Ciccone (Trek-Segafredo) took an impressive victory in the Giro d’Italia today, after the Italian rider emerged victorious from a rainy day in the Alps to beat fellow breakaway companion Jan Hirt (Astana) in a two-up sprint.

A large breakaway group escaped the peloton early on in today’s stage, subsequently building up an advantage of more than five minutes.

En route to the Mortirolo, the breakaway split into smaller groups on several occasions before re-forming again.

In the meantime, Nibali’s Bahrain-Merida team brought him up alongside Movistar at the front of the peloton, with Mitchelton-Scott and Jumbo-Visma also present.

Nathan Brown did a huge turn for his Education First teammate Joe Dombrowski, only for the latter to be dropped early from the head of the now much-reduced breakaway.

Astana had numbers up the road as well, but their team leader Miguel Angel Lopez could be seen struggling to sty on terms with the group of favorites, as well Simon Yates.

Glancing around to get the gauge of his rivals, Nibali came off his teammate Domenico Pozzovivo’s wheel and began to ride away from the group. Reactions were limited, but Movistar worked to keep the Italian in sight while behind them very few riders could keep pace.

Hugh Carthy (Education First) was the next rider to try and make his way over the Nibali, while Lopez and Baulke Mollema made their way back on to the Movistar trio of Mikel Landa, Antonio Pedrero and current race leader Richard Carapaz along the easier slopes.

Finding a second wind, Lopez rode away from the group and forced a reaction from Movistar while Roglic and Mollema were distanced. The Dutchman pushed on and the Slovenian looked to be suffering.

Nibali reached his brother Antonio’s wheel and with Carthy still in tow they tried to gain a greater gap. Despite their efforts, their advantage to Landa et al was held at a relatively manageable distance. Landa and Carapaz took it on after Pedrero’s day was done.

Yates later made contact and passed Roglic, who latched on to the group in the hope of lasting to the top of the climb without shelling too much time to his rivals.

Up the road. and the breakaway was still holding onto a four minute lead, albeit under worsening weather conditions.

For all his efforts, Nibali couldn’t make his efforts stick as Lopez, Carapaz and Landa made their way back. Lopez went straight to the front but simply sat in front of Nibali for a little while before returning to the back of the group.

However, an undeterred Lopez attacked again, this time causing Carthy to be temporarily dropped, while Landa worked dutifully at the front for the benefit of Carapaz.

Loitering near the summit was Andrey Amador, another rider to work for Carapaz and Landa. Lopez went over the top first of the GC group with a huge gap back to Roglic but just a few seconds over those he’d been riding up the climb with.

Wet, narrow roads with tight hairpin bends, this was a descent for the skilled and the brave. Lopez’s move over the summit was wise as he and teammate Pello Bilbao were able to ride free from the stress of the group while holding an advantage. In weather conditions like these, Nibali’s much talked about descending skills were all but neutralised as he was forced to be as cautious as everyone else.

At the very front of the race, Ciccone tried to go alone, but Hirt was keen to mark his move.

Amador was done for Movistar, while Nibali took up the pace on the GC group even dispensing with his own teammate who’d dropped back to do a turn.

Meanwhile, Roglic, Yates and Mollema succeeded in reducing their deficit to 45 seconds.

Nibali’s teammate, Damiano Caruso, came back to the front to have another go for his leader.

Backup front, Ciccone and Hirt appeared to call a truce at the top of the Mortirolo, riding together during the closing kilometers.

From there, the duo passed under the flamme rouge with 2:12 advantage over the pink jersey group, with Ciccone winning the final uphill grind to claim the stage honors.