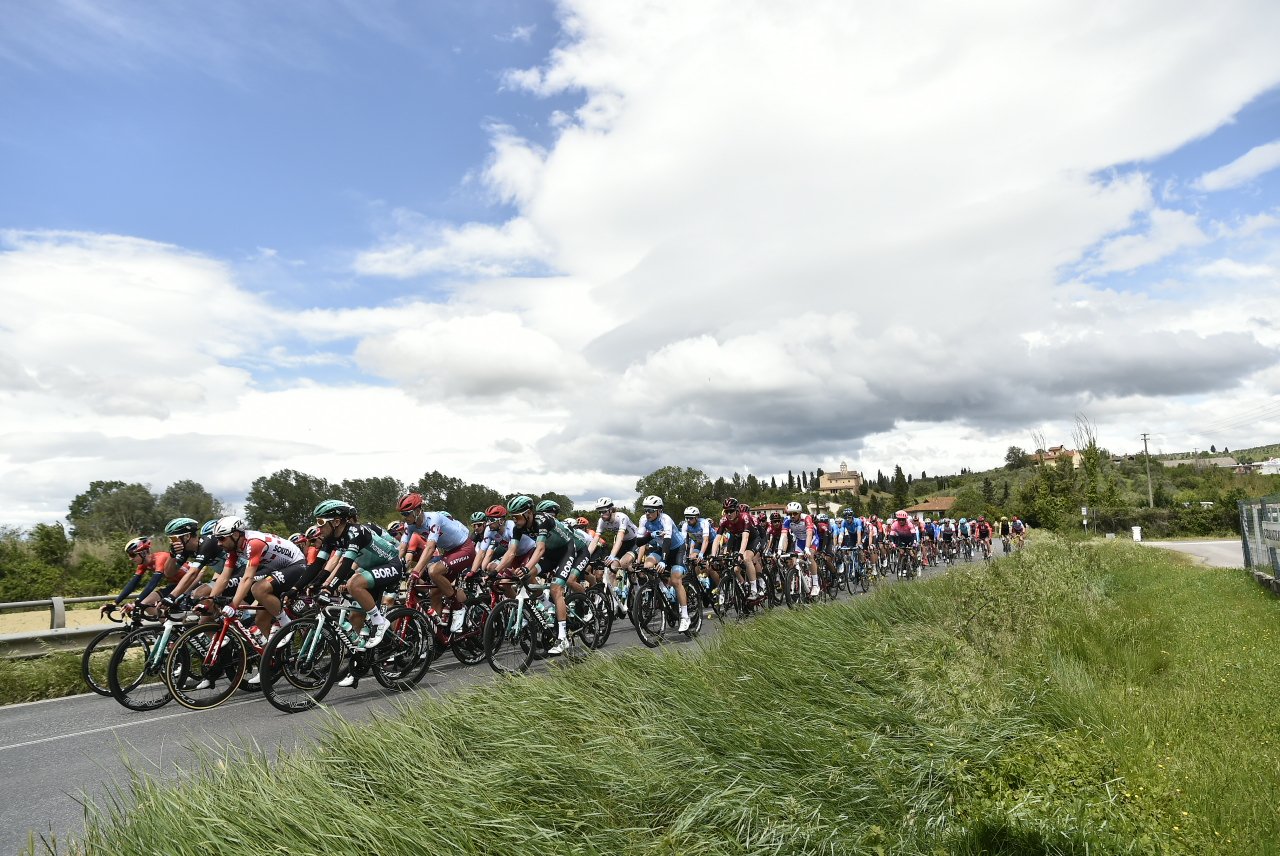 Elia Viviani was stripped of victory as stage 3 of the Giro d’Italia ended in a chaotic sprint in Orbetello on Monday.

Deceuninck-Quick Step sprinter Viviani crossed the line first at the end of the 219 kilometer stage from Vinci and looked to have taken victory, but he was later relegated for changing his line and blocking Trek-Segafredo’s Matteo Moschetti.

It was a messy end to a stage which, for the first three-quarters, was taken at a relatively easy pace.

After a late crash had split the peloton in two, a chicane in the final kilometer uncoupled the sprint trains and left the leading contenders to battle it out for themselves.

Meanwhile, stage 2 winner Pascal Ackermann launched his attack first but had gone too soon, with Viviani, Gaviria and Démare coming around the Bora-Hansgrohe rider in the final metres. But Viviani had veered strongly left, forcing Moschetti to sit up and stop his sprint.

The crash with five kilometers left shook up the general classification too with Team Ineos’ Tao Geoghegan Hart the big loser.

The British rider began the day 35-seconds off of Primoz Roglic in pink but, having chased back on to the group with a bloodied knee following a crash with 50 kilometers to go, was held up by the incident and lost 91 seconds.

A blustery start seemed to act as a deterrent for any aspiring escapees with just the one rider, Japan’s Sho Hatsuyama, nipping clear of the peloton in the opening kilometer.

Little happened on the road for the opening few hours as our plucky lone leader put in a huge shift for his Nippo-Vini Fantini Faizanè team and their myriad sponsors to build up a maximum advantage of seven minutes in the rolling Tuscan hills west of Siena.

The former Japanese national champion saw his lead come down to below the three-minute mark following the intermediate sprint at Poggibonsi as Demare’s Groupama-FDJ team upped the tempo behind to propel their Frenchman to the maximum remaining points in the battle for the maglia ciclamino.

But Hatsuyama stretched out his lead to seven minutes over rolling terrain until Belgium’s Thomas De Gendt – a man normally playing the lone leader role – came to the front of the peloton to help lead the chase for his Lotto Soudal team-mate Ewan.

With the lead still around the five-minute mark, a long and technical descent from the top of a ridge signalled a shift in the peloton as Trek-Segafredo came to the front and threw the hammer down.

As the wind increased and all the teams of the main favorites clustered towards the front, Hatsuyama’s lead tumbled down, the 30-year-old suddenly finding himself clinging on off the back of the pack with 75 kilometers remaining.

Demare doubled up at the second intermediate sprint at Grosseto which saw the route organizers take a novel approach to route design more closely related to an assault course than a bike race.

Riders were forced to bunny-hop over pavements and weave their way around road furniture as the pressure intensified dramatically. Britain’s Tao Geoghegan Hart (Team Ineos) was the big casualty, the youngster from Hackney doing down and bloodying his right knee.

The drama eased off as Italy’s Giulio Ciccone (Trek-Segafredo) led the pack over the summit of the only categorised climb, the Cat.4 rise to Poggio l’Apparita, to consolidate his lead in the maglia azzurra king of the mountains competition.

But the tension was still high as the peloton rollicked its way towards the coast and the expected crosswinds of the spit separating the Tyrrhenian Sea from the salt lagoon of Orbetello.

With 5 kilometers remaining a crash involving Enrico Battaglin (Katusha-Alpecin) caused a split in the pack and brought down Geoghegan Hart for a second time – the youngster eventually rolling home 1:28  down with four other Ineos team-mates.

Back on the front and it was Bob Jungels of Deceuninck-QuickStep who led a reduced peloton through the kilometer-to-go barrier with Viviani in tow.

A tight left then right-hand bend inside the final 500 meters shuffled the pack and dealt Ackermann the strongest hand. But the German went too early and had no wind left in his sails by the time Viviani powered through for what looked like to be his first victory of the race.

The race jury, however, adjudged that the Italian national champion had sprinted too erratically and relegated him to the back of the peloton in 73rd place – much to the disgust of the rider and his team manager Patrick Lefevere.