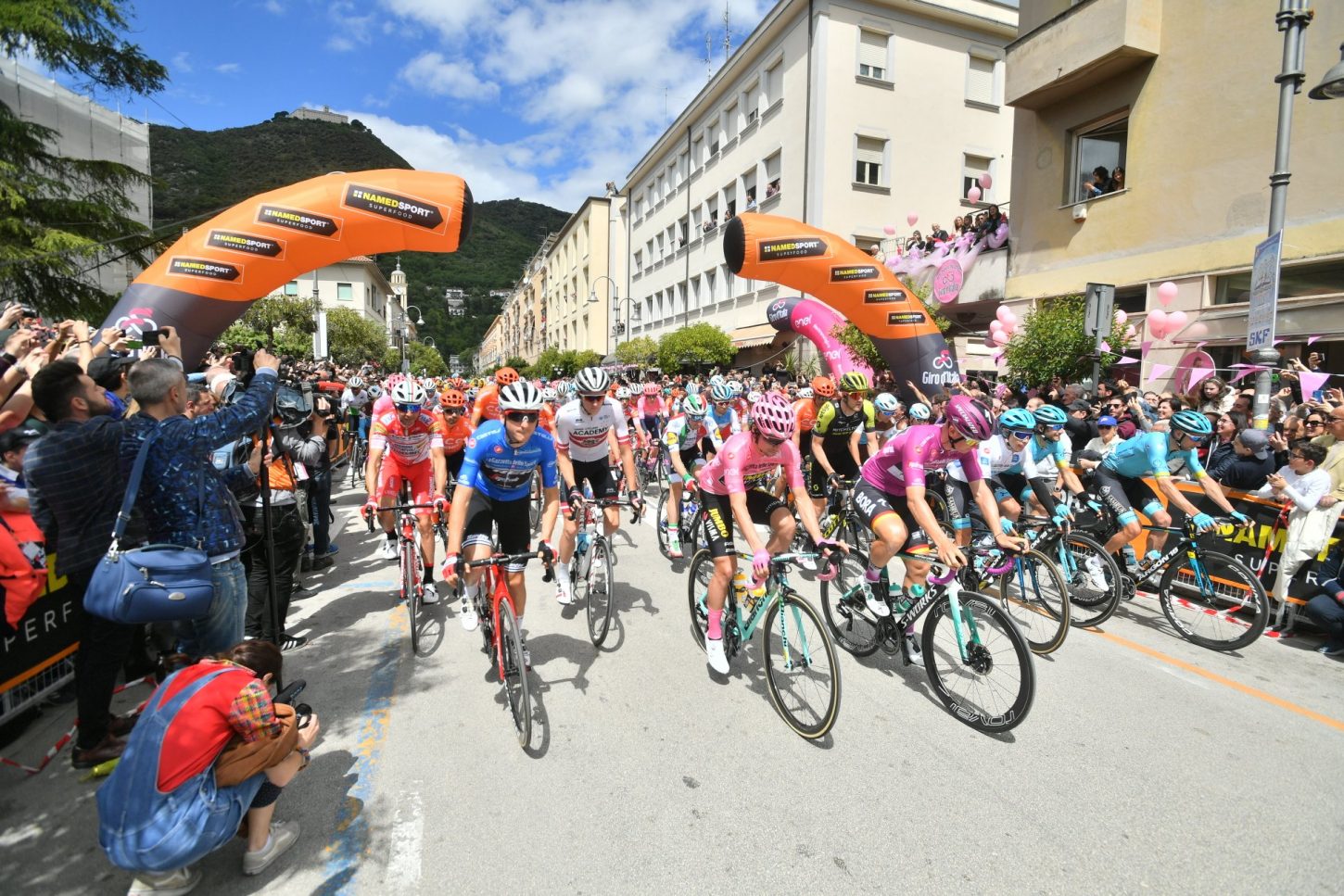 After an opening few days marked with frustration for many Italian fans, they could celebrate today after Masnada took his first Grand Tour stage win for the Italian Androni Giocattoli-Sidermec team, while compatriot Conti was close on his wheel to take the race lead from Primoz Roglic.

Roglic was part of a peloton which crossed the line more than seven minutes back but though his shorts were ripped from an early crash he looked unconcerned by the loss of pink, with the peloton choosing not to chase down the break over the course of the 238km stage from Cassino to San Giovanni Rotondo.

With riders from the 13-man breakaway taking over the top 10, Roglic slid down to 11th in the general classification, five minutes and 24 seconds off pink. Mitchelton-Scott’s Simon Yates, dropped to 13th, still 35 seconds behind Roglic, with Italian Vincenzo Nibali of Bahrain-Merida another four seconds back.

An early crash for leader Primoz Roglic set the tone for the long 238km stage, with the Slovenian’s Jumbo-Visma team then content to sit in, control the main GC contenders, and give the breakaway sufficient leeway on a lumpy day in central Italy.

Italian duo Conti and Masnada worked together with gusto after attacking off the front of the break on the day’s big climb, heading into the finishing straight with both riders set to achieve their objectives. Masnada (Androni Giacattoli-Sidermec) kicked clear to take a maiden Grand Tour stage win four seconds clear of Conti (UAE Team Emirates) who moved into the pink jersey with ample room to spare.

Conti now holds a 1:41 lead at the top of the pack over compatriot Giovanni Carboni of Bardiani-CSF, who took fifth place on the stage to move into the lead of the white jersey youth classification and give the host nation a near clean-sweep of all jersey competitions.

Roglic, his backside bruised but ready to fight another day, came home in the bunch, dropping down to 11th in the standings. He now trails Conti by 5:24 but maintains his 35-second lead over major GC threat Simon Yates(Mitchelton-Scott).

Trailing Roglic by 1:59 going into the stage, the Italian Conti was riding as virtual maglia rosa in a strong move which looked a safe bet of going all the way to the finish.

Flying the flag for the Dutch and Team Sunweb – in the absence of the 2017 champion Tom Dumoulin – was the young climber Oomen, whose team-mate Rob Power had been forced to retire from the race following the pile-up that involved Roglic, reducing Sunweb to just six riders.

The gap steadily grew to above the six-minute mark with 100km remaining, the Jumbo-Visma squad of the maglia rosa content to keep a lid on things without leading any ostensible chase.

With a gap of just over five minutes, the 13-man move edged onto the early slopes of the Cat.2 climb of Coppa Casarinelle – its relatively gentle average gradient of 4.4% over 15km hardly pulverising, but a difficult test nonetheless after more than 200km already in the saddle.

Masnada put in the first big attack and was joined by Conti as the two Italians build up a good gap over a trio of chasers in Plaza, Rojas and Carboni. Masnada, who won two stages in the Tour of the Alps in April, took maximum points over the summit before Conti pocketed three extra bonus seconds at the subsequent intermediate sprint.

The understanding between the two Italians was strong – especially with Conti almost guaranteed the maglia rosa at the end of the stage. For the gap back to the peloton – being led with apparent indifference by Roglic’s Jumbo-Visma team – was now well over seven minutes. Stage win or not, Conti was looking at a five-minute lead at the top of the new-look general classification.

With 10km remaining, the duo held a 30-second gap over the three chasers with Oomen leading a second group of six a further 15 seconds back.