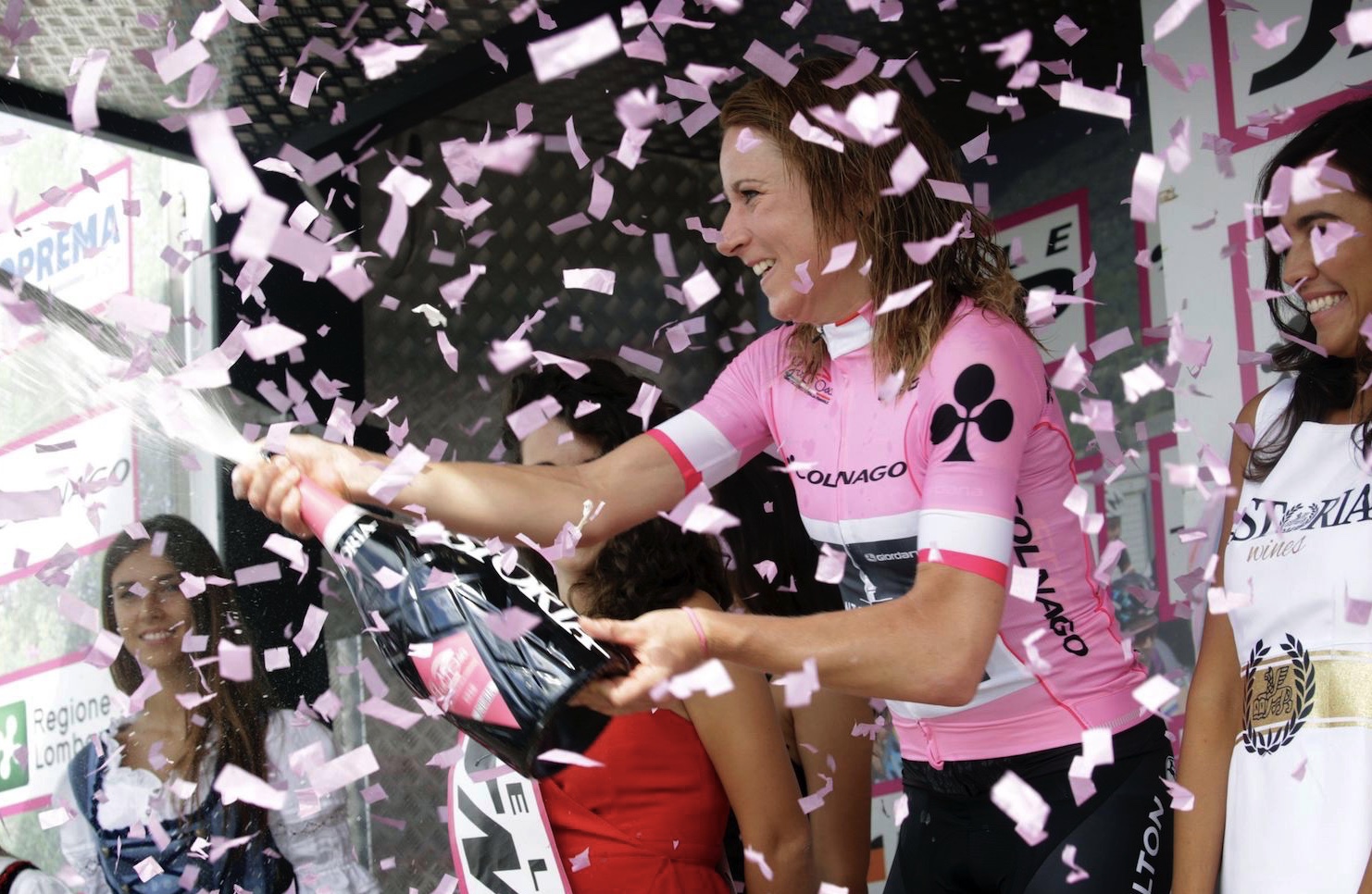 The world of sports has not been spared from the representational scrutiny brought along by the fourth wave feminist movement and its harsh critique of today’s antiquated regulations. More and more fields that used to be exclusive boys’ clubs were urged to take a stand against sexism in the industry. But while many did, some things still remain unchanged.

In this article, we will analyze the lack of impact generated by Italy’s Giro Rosa in contrast with the Tour de France, one of the most male-centric events in the world of cycling. Is the lack of interest in women’s biking caused by institutionalized misogyny, is it a matter of poor marketing and improper scheduling decision, or is it plain indifference? Let’s find out.

Discrimination in Cycling: Fact or Fiction?

To better understand whether or not gender discrimination is involved in the field of professional cycling, it is necessary to first take a look at the common roles played by women within it. What position do they occupy when it comes to this? Unfortunately, the first image to pop to mind isn’t that of an accomplished female rider, but rather an attractive podium girl.

The Conundrum of Podium Girls

As it is the case with many other sporting events, young and good-looking ladies usually do the honors as far as keeping score and granting awards go. This all happens in front of a live audience, which automatically elicits a pleasant visual response. The practice in itself would not be regarded as so heinous by many if that wasn’t the only function women fulfilled.

In fact, the podium girl could even be an empowering position to fill if only the men of the game didn’t treat it as something demeaning. Many occurrences have demonstrated how they are put there just to be looked at. An unfortunate illustration of this occurred in 2013 when the Tour de Flanders winners stood on the dais.

While the women customarily congratulated winner Fabian Cancellara with a kiss on the cheek, runner-up Peter Sagan seized the opportunity to grope one of them by the name of Maja Leye. As she later reported for the press, she froze on the spot and subsequently fought the urge to slap him for his uncouth gesture.

Peter Sagan subsequently apologized for his gesture, and all was well in the world of cycling once more. But was it really? While a few cycling events dropped podium girls in 2017, most notably the Tour Down Under in Australia and the Volta Catalunya and Vuelta a España in Spain, the Tour de France still kept theirs in spite of prolonged debates in the community.

If only that were the only problem with the Tour de France as far as gender representation is concerned. Unfortunately, the world’s largest cycling event of the year is also the one with the longest tradition of being a men-only affair. Women have been banned from participating in it for the entirety of its 115 years of existence.

In fact, the Tour de France doesn’t even hold an adjacent women-only event like many others of its kind. Here is where the Giro Rosa comes in. Because it happens at the same time as the aforementioned male-centric behemoth, many consider it a worthy competitor, as well as a way to prove a point. But is it? We will explore this notion in the following section.

The Giro Rosa and Its Complicated History

At the present time, the Giro d’Italia Femminile, nicknamed the Giro Rosa, is the only women’s Grand Tour cycling event left in the world. Previously known as the Giro Donne, it holds monopoly over the domain since 2010, when the Tour de l’Aude Cycliste Féminin was canceled. This happened shortly after the Grand Boucle was discontinued as well in 2009.

The first edition of the Giro Rosa took place in 1988, which means that the event celebrated its 29th edition this year in 2018. It is organized by the Union Cycliste Internationale just like the Tour de France, and it is a female-driven companion to the already well-established Giro d’Italia. But even with its decades-worth of history, no one seems to talk about it that much.

Could it be because it happens during almost the same time as the Tour de France, the one biking-related occasion everyone wants to watch? For comparison the Giro Rosa took place from the 6th to the 15th of July this year, while the Tour de France was held between the 7th and the 29th. Why does one last longer than the other, you might ask?

The UCI specifically limits female competitions to seven days, unless otherwise specified. From this point of view, the Giro Rosa is fortunate to have a total of 10 days to unfold, even when the Tour de France has 23. In France, women get just one day before the main event to cycle their way through the contest, and theirs isn’t even official.

The name itself is demeaning, as the occasion is referred to as the Donnons des elles au Velo Jour-1, which can be roughly translated to “let the girls ride the day before.” The women in the movement are adamant about shedding light on the inherent sexism that has been part and parcel of the Tour de France since the 1980s, when the women’s event was gradually phased out.

Is the Giro Rosa a worthy contender? Judging by the amount of media coverage it usually gets, many would argue that it isn’t. Still, is institutionalized chauvinism to blame here, or is the issue about something more? Not every single problem has to be a matter of prejudice, but that doesn’t mean that the problem has ceased to exist.

Beyond Sexism: Scheduling and Marketing Issues

Scheduling the Giro Rosa at around the same time as the Tour de France immediately creates an unwavering problem. It’s no secret that the TdF is the one cycling event that draws attention from a wide variety of audiences, regardless of their interest level in the sport as a whole. Its female contender on the other hand becomes a clear underdog.

Even though popular media has led us to believe that everyone roots for the underdog, just like Luke Skywalker in Star Wars, the same cannot be said about the Giro Rosa. If anything, the general public is indifferent to it at best. Italian broadcaster RAI shows highlights from the stage race each night for its entire duration, but the rest of the world is sunken in radio silence.

Poor Media Coverage and Its Consequences

American audiences that enjoy the Giro Rosa are left with only social media. They have to piece together what happens during the various stages by relentlessly following the athletes on Twitter, as well as those with access to the contest on television. According to U.S. cyclist Mara Abbott, this is a huge problem for women’s cycling.

When women don’t get any TV coverage for their performances, they don’t draw in sponsors. No sponsors means no money, which forces many of them to live on a fraction of the revenue their male counterparts get. How can young girls be motivated to become pro riders if it looks like the effort isn’t worth the reward?

Abbott won the Giro Rosa twice and still had to work at her local farmer’s market to make ends meet, otherwise she wouldn’t have been able to afford her mortgage. Of course, in the words of TdF commentator Ned Goulding, this is a universal truth for the sport. And yet, men are seldom forced to confront it.

When asked about the lack of Giro Rosa highlights incorporated in the Tour de France broadcasts, Goulding stated for The Guardian that doing so would be rather tokenistic. Instead, televisions from all around the world should dedicate an hour every night for the race, which is just as engaging to watch as any other male-centric event.

In the Western world, Eurosport and ITV4 relentlessly cover the Tour de France every July, yet never even so much as mention the Giro Rosa. One can argue that both conflicting schedules and indifference are to blame here, but something more could be at stake. After all, proper marketing could solve the problem, and it doesn’t seem like it’s doing anything in that direction.

At the end of the day, what would benefit the Giro Rosa most would be a modern and media-driven marketing campaign that can get things in motion. For women to finally be put on the map of pro cycling, the event requires full integration into the industry, and this includes brand deals, field reporters, and the larger context of road racing.

Organizers must stop being lazy, or else companies and media outlets alike won’t see any financial gains if they join forces with the Giro Rosa. The race is a fantastic one, and showing that to world is an important first step in dispelling the myth that women’s bike racing simply isn’t exciting enough to watch every night.

The issue of money is what caused the original women’s Tour de France segment to die down slowly and quietly in the 1980s. As explained by BBC, interest in it quickly dwindled, which led to low investments and missing editions. Organizers were forced to rebrand it over the course of several years, with the Grand Boucle being the final product. And that’s gone now as well.

The Amaury Sport Organization, the media entity behind the TdF has the budget to organize a women’s tour. In fact, it has had the money since at least 2016, when it turned a profit of 46 million euros. That’s around 50 million dollars for our American readers, and it’s arguably a whole lot of money. So, why doesn’t ASO invest in an event for the girls?

At this point in time, not doing so will actually be bad for their portfolio. Women’s rights and representation are drawing more attention with each passing month, which has brought the stark requirement for gender equality to the forefront. If cycling doesn’t comply, the sport’s legitimacy and relevance will definitely suffer.

The positions occupied by women in the field of professional cycling are unfortunately outdated and rather sexist. With most girls aiming to look pretty on the podium next to male winners, is there anything left for riders who aspire for greatness? If Tour de France organizers open their eyes to current events, there might be.

Saying that ending the problem has one clear solution would be limiting and simply untrue. Allowing women to ride in the TdF is one way to look at it, but we should also work on improving public knowledge of the Grand Tour we already have, namely the Giro d’Italia Femminile. Clever marketing is the first step towards this, but who knows how long we’ll wait?

Oliver Devon is an amateur rider on tarmac and a seasoned veteran when it comes to the world of riding. Sitting on the edge of his seat, he sifts through tones of news daily, everything is stored into his head and everything above that gets posted on BikeGearExpert, the place that he calls home.