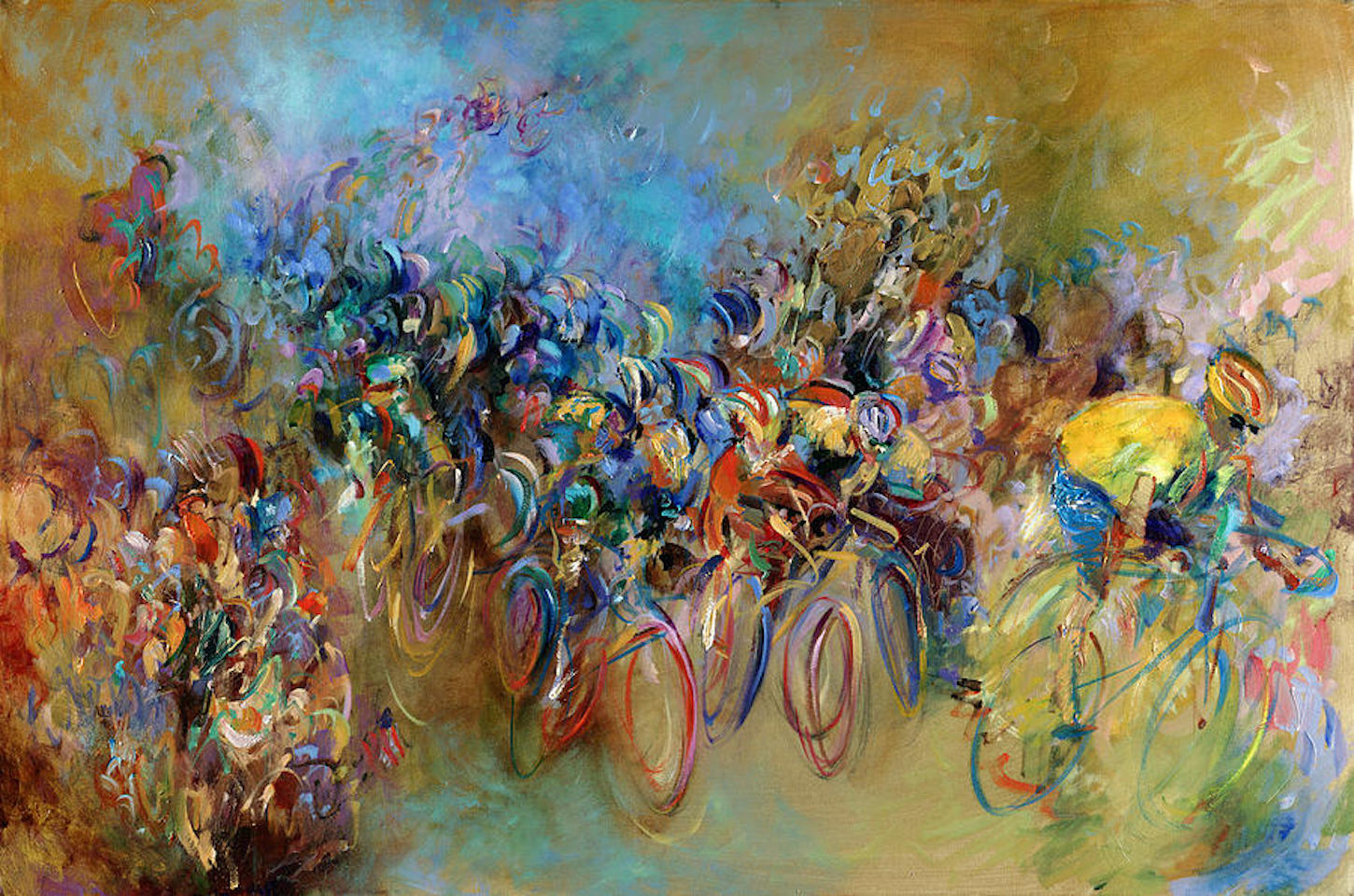 Consider yourself a virtual spectator as you read my words here. First you must know the route of the Tour like the back of your hand. A Michelin road atlas of France is a must or access to google maps electronically. All the Tour info is published on letour.com with stage starts and finishes with departure and arrival times. All of the American and European cycling publications have printed editions of this as well. Compare the the Tour route to the Michelin maps until you are familiar with the geography of each stage.

Next step is a properly outfitted “tour velo.” You  may not have  a 1970s proper touring bike with T.A. cranks and a Campy Rally derailleur in your stable so grab a modem lightweight “gravel bike,” toss on a rack and panniers and be prepared to ride mega kilometers! You’ll need a passport, a VISA card and cash (Euros) and an AYH Youth Hotel card helps if you prefer sleeping on a mattress in lieu of straw in a barn. (NOTE: a lot of France is very rural!) Youth hostels can be restrictive and sometimes ask you to do (gasp!) chores but it seems that everyone in France is in the hotel business from cheap motel chains to five star hotels so there are many choices if you plan ahead. Don’t bother dragging around a tent and sleeping bag as this is not Boy Scout Camp.

Carry only the most minimal essentials as you’re likely to tackle the Alps, Pyrenees, or the Vosges mountains and maybe the Massive Central and the lighter your load the better.

Unlike the USA cyclists are welcome in most restaurants no matter how sweaty you are. After all, the French are accustomed to dining with their dogs at the dinner table. Good food is plentiful and relatively inexpensive in France and you’11 never want for a good glass of wine.

Every village has a patisserie (bakery) and a boulangerie (deli) for take out food.

From the forthcoming book, “Confessions of a Tour de France Groupie, or How I ‘Stitched Up’ the French for Forty Years and Evaded a Trip to Devil’s Island,” by Greg Honn.

So, you want to see theTour De France? The best way to see it is on television … French television which is what you are witnessing on MSNBC or Euro-Sport or even youtube as it is all from the same camera feed but with different commentaries.

However, if you want to “experience” the Tour, you must be there in person as I have done more than twenty five times since 1973.

Every cyclist and many novice fans will agree that the Tour is the greatest sporting spectacle ever since its inception in 1903 as a publicity stunt by Henri Desgrange to promote his tabloid,“L’ Auto”.

Today, the Tour is big business with plenty of corporate sponsorship as its caravan of advertising vehicles rolls ahead of the peloton and is seen by hundreds of thousands of roadside spectators as the race itself is broadcast live in nearly one hundred countries worldwide. Three weeks in the saddle around France with a finish on the Champs-Elysee  in gay Paris is more than the world’s greatest bike race. It is a living, breathing entity that generates close to 20% of France’s GDP for the month of July. So here is a primer as to how to follow the Tour stage by stage up close and in person; but not via one of  the fancy touring companies  who cart you around France in a bus and only let you see what they want you to see! Witness the tour as the riders do-sur la velo!

Now let’s examine the 2019 route and plan to see the race at the best venues possible. Since this is the 50th anniversray of Eddy Merckx’s runaway victory in 1969 the French have had to honor Merckx’s legacy by launching the Tour in Brussels, Belgium on Saturday, July 6th.

However, the streets of Brussels will be jammed with beer swilling, frites munching Belgians and for this stage it is much better to catch the race early on at either the Mur de Grammont or Bosberg  climbs  only 40 or so kilometers from the capital. Plan to be there about three hours prior  to the race’s arrival as these historic climbs too will be flooded by the public. This stage mimics the Tour of Flanders and it will  be pandemonium from the gun! Three and a half hours and 140 kilometers later the peloton will be sprinting in front of the Royal Palace in Brussels and hopefully a Belgian will take the stage. As an alternative there is a sector of pave just outside of Chaleroi 77 kilometers from the finish that will guarantee plenty of action and an excellent opportunity for major attacks. Every cafe will have the tour on telly  and  after  the Broom Wagon saunters  by you’11 want to retire to a cafe to catch the action, savor some Duvel or Maes Pils beer and with any luck a Belgian family may take you home for the a meal and a night of free lodging.

The team time trial is one of the most spectacular cycling events you may ever witness as you see a full team in flight on super aero time trial bikes with all the riders decked out in their skinsuits going hell for leather. Many of the teams with the best hope for a high general classification in the mountains may be at a disadvantage here as this is a pure power event and the times will most likely be calculated on the fifth man of each team to cross the finish line. The route from the Palais Royal in Brussels to the Atomium is a mere 27.6 kilometers but it is not entirely flat and a team’s bike handling skills will be as important as raw speed. The top of the Avenue Franklin Roosevelt may be one of the best venues to catch the action as it is the high point of the course and just before the half way mark. Some teams may lose one or more of their cohorts here but the goal is to get your best GC contender Mt9r safely to the finish as fast as possible. Look for a strong performance from Jim Ochowicz’s CCC team here as it was formerly the BMC squad that garnered so many team time trial victories in the past.

This may put Greg Van Avermaet in yellow as he is not likely to have lost time in the first stage. Some of the weaker teams may lose minutes here and even some of the best climbers such as Bardet (AG2R), Pinot (FDJ), Quintana (Moviestar), and Calmejane (Total Direct Energy) will suffer at the hands of stronger teams whose GC men like Nibali (Bahrain­ Merida), Fuglsang (Astana), Uran (BF-Education First), Adam Yates (Mitchelton-Scott), and certainly defending champion Geraint Thomas (Ineos), can dominate mountain stages as well. The times among the strongest teams will be very close.