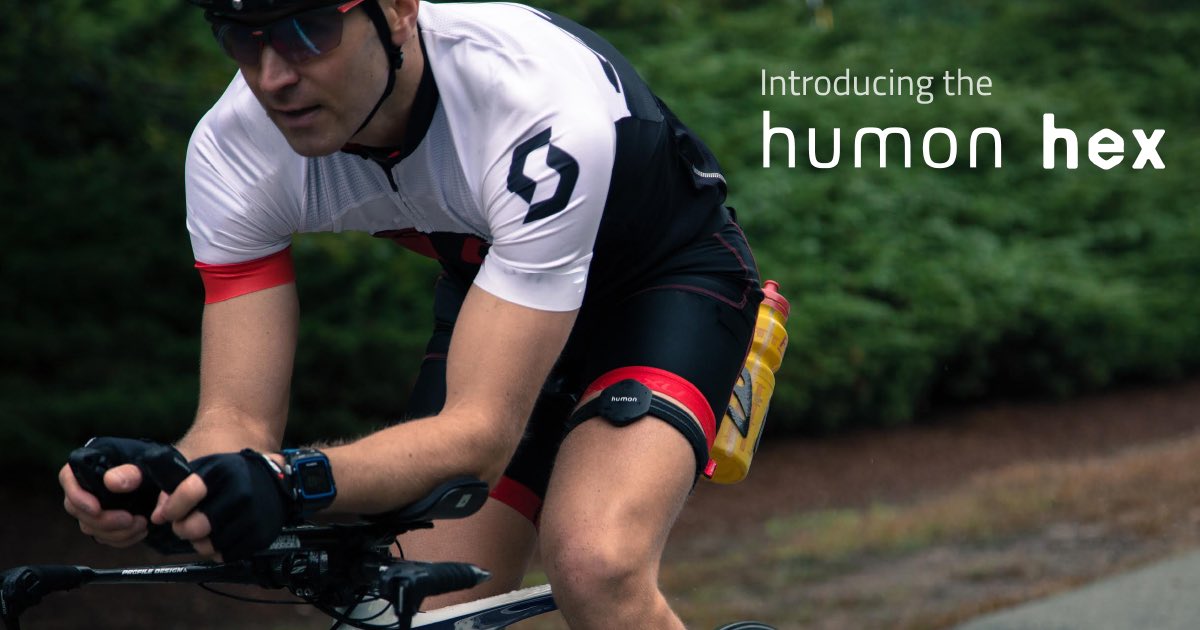 The Cambridge, Massachusetts start-up Humon has launched a new wearable fitness tracker called the Hex, which not only provides real-time workout metrics, but is also one of the first such devices to offer coaching by way of artificial intelligence.

According to Humon, the Hex is the first wearable sensor that’s capable of detecting oxygen levels in muscle using LEDs that emit near-infrared light into the wearer’s tissue, which in turn can measure hemoglobin saturation. From there, the device is capable of calculating overall muscle oxygenation (SmO2), allowing athletes to gauge the level of exertion they should expend.

“The wearable market for athletes to date has been dependent on measuring heart rate, which is a very limited indicator of fatigue and workout intensity,” says CEO and co-founder of Humon, Alessandro Babini. “By measuring the amount of oxygen that a muscle group is using, athletes can reach the optimum workout intensity level without exceeding their limits.”

The Hex started out as a MIT research project, which Humon claims is the first clinically validated wearable to use optical sensors to non-invasively monitor the oxygen levels in the muscle.

“MIT Sloan were also convinced in doing research on this topic so we partnered with them and did a nine-month research project with the goal to identify how the two subjects could be brought closer together”, says Babini.

Unlike other wearables, the Hex is designed to be worn on the thigh by virtue of the fact that the quadricep is the main muscle behind running and cycling. Moreover, there’s no calibration or need to input data like age, height, weight etc on the companion app.

“By wearing the device directly on the quad, the biggest muscle that is exerted the most during these endurance sports, we are able to tell how your muscles are reacting,” Babini explains. “We can tell you in real time about how you are warming up, how far you are from your limit, how you are recovering and when or not you should keep pushing yourself.”

Humon says its technology is the extrapolation of the common pulse oximeter used in hospitals and clinics to measure blood oxygen. However, the Hex simplifies things by directly measuring the concentration of oxygen in the wearer’s muscle directly, rather than relying on arteries.

While Humon recommends the Hex be worn on the quad, it’s capable of being used on the tricep as well. “The device has been built to be worn on the thigh because of the market we are going after, but it does work on any muscle”, he said. “So we have a bunch of people who are wearing it on their triceps and doing press ups and trying to see the optimal recovery time doing push-ups sets. A bunch of crossfitters and weightlifters have asked us for sensors in t-shirts that can monitor muscles in the upper body and that’s something we are going to look at in the future.”

How accurate is the Hex?

Babini says,“our product was vetted clinically, however, the study is still going so I’m not allowed to discuss by who.” “In terms of absolute value, we are 94% accurate. In terms of physiological change, we are spot on. We have been working with a lot of professional athletes runners, cyclists, triathletes as well as gyms and athletes from different kinds of sports. We’ve had NFL players and basketball players test it out as well. Along with a host of physiologists we’ve been able to tailor the programs that can help lead to performance improvements.”

The Hex is currently compatible with all Garmin Forerunner watches using ANT+ and uses a color coded system to signal wearers whether they should be going easy or go hard, while the companion app captures GPS, pace and cadence data as well and lets athletes export their data to other platforms including Garmin’s.

But that’s just for starters, as Babini hopes to partner with other third-party platforms and devices in the future.

“Our insights and artificial intelligence we are building will only get better,” he said. “Because the device can be worn on any part of the body, we have received interest from professional teams from american football, basketball and soccer. The coaches want the devices on their athletes. That’s a process we will start next year. We believe our sensors can really impact on how different people train and how they can get better, stronger and faster.”

The Hex communicates its data in real time via Bluetooth to either an iOS or Android smarthphone, or a compatible Garmin smartwatch.

Preorders for the Hex are now open $275, with availability starting at the end of February.