“Hunting the Unexpected” Bikepacking Across Kyrgyzstan 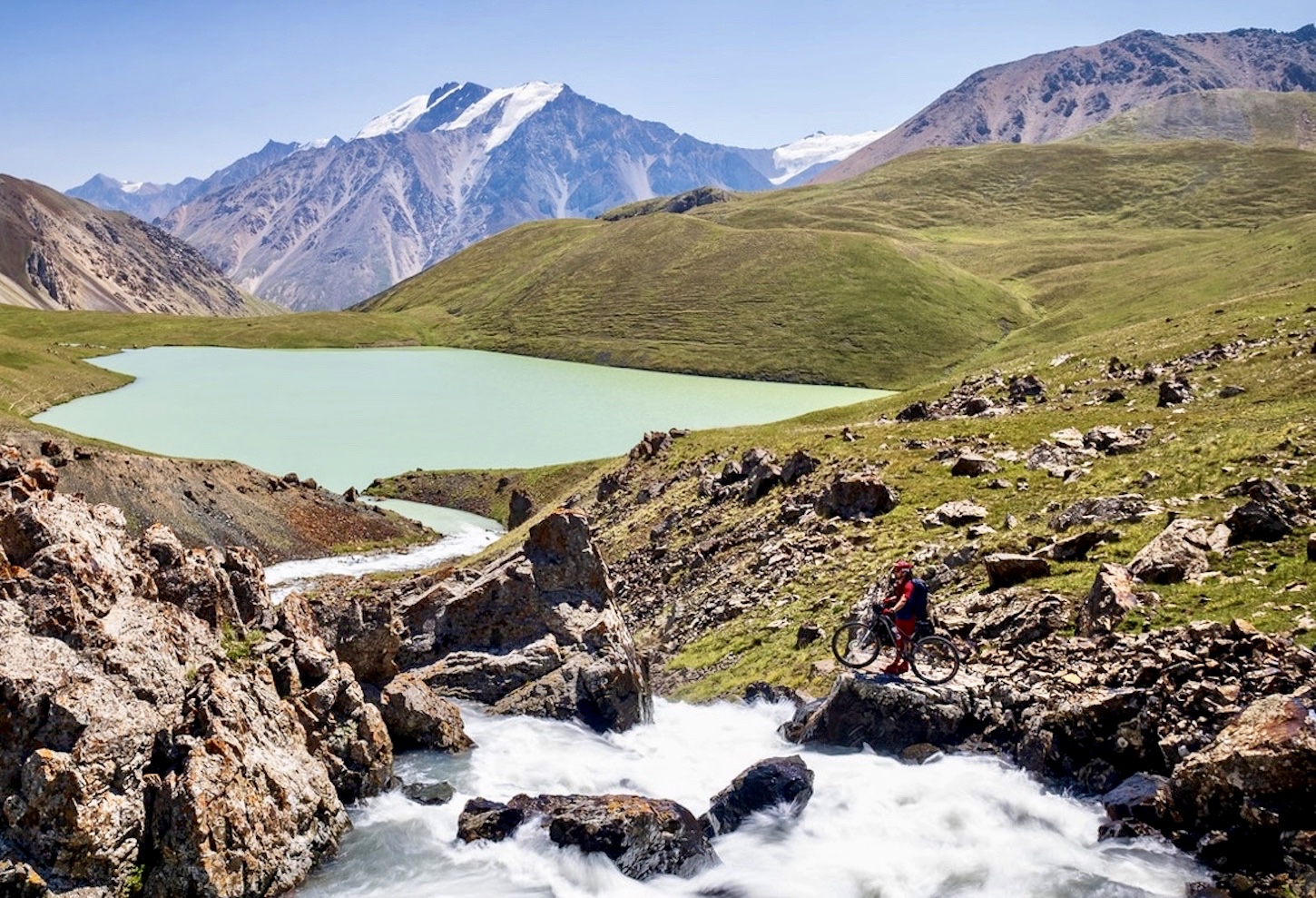 Kyrgyzstan is a young nation, less than 30 years old, historically occupied by nomads. The country is nearly only mountain-constituted, and its glaciers provides water to all the bordering countries such as Uzbekistan, Tadjikistan, or Kazakhstan. With an area 5 times bigger than Switzerland, populated by just more than 6 million people, yes, it is no more than a pushover to get lost there. Getting into an exciting adventure: the knowledge of not knowing what is waiting for us.

A narrow névé, and then nothing. The trail we followed since leaving Kök Bulak (2300 m) this morning collapsed just in front of our ultimate end point; reaching the famous Tong Ashuu pass. Anyway, I tried to get through that passage by walking slowly on the unstable little rocks. On my right, the magnificent glacier looked at me like a hungry old mountain who doesn’t know the meaning of “pity”. I started to walk. One step. One more. I lost control on that 40° section. Underneath these rocks, I realised that there was an old glacier. It just wants to bring me down the mountain. Step back. Take a breath. I will have to run. By gaining some altitude, walking carefully but quickly, I may have a chance of not getting caught by the glacier. 5 minutes later, I reached the pass. Incredible. Beautiful. After 5 minutes descending, a dead horse carcass let us know that we are probably on unfriendly terrain right now. Yesterday, the people in the valley told us that we will easily find a yurt to sleep in, and food will not be a problem at all.

As we ride down to the famous jilu suu hot water spring (45°), the sun shone in front of us, as if it wanted to show us the way and keep us warm. 10 minutes later, I could only see an old building. The grandpa told me to turn off the camera. Apart from a river, water springs and a really old Audi 100, there was no trace of life. Nothing. Fortunately, we had our 2-man tent on the handlebars. Kuku, a 40-year-old woman living in Bishkek, was there to get some benefits from the hot water spring for her injured knee. She speaks French. She will cook something for us tonight, and breakfast too. Lost in the middle of nowhere, there’s someone to help you and give you a hand. This is Kyrgyzstan.

The next day we decided to go to the Teshik-Köl lakes. There are no words to describe that place. Wild horses, lakes with blue water, dark green grass, all at 4 to 5000 m altitude. Glaciers around us. We continued on our way to an old shepherd’s pass. It’s not on the map, but the Frenchman we met in Bishkek, Stephane, told us that it will join the next valley. At the top, we met a group of American and French people, walking with a local guide.

I could speak about that moment, when we were completely lost and we had to get across that 100-meter wide glacier river, and we met that family (around 15 people with the kids) on our way. 5 minutes later, we were under their shelter having 3 shots of vodka together.

I could speak about the 4 hours that followed that incredible moment; walking across that deep river; riding across the top of a sketchy cliff where you could fall 300 metres in a second; or the 35 kilometres we decided to ride, the same evening, in order to find something to eat. By nightfall, we arrived in that small village. There was nothing there. 10 minutes later, we got something to eat from one family and an 80-year-old Russian grandfather let us put the tent in his garden and offered us tea and biscuits. After such a long day, I almost started cry, overwhelmed by the sheer generosity of these people. We spent the next morning playing with the kids and listening to the grandfather’s stories. We left around 10am and he began to cry. “Thanks for coming here, it’s amazing to share these kinds of moments together”. He doesn’t speak any other language than Russian, but we don’t need any words. That moment will be one of the most breathtaking of my entire life. Once again, I realised that the people who own the least, will give you the most.

I could speak about these endless single trails, created by wild horses, bringing you down to the next village. Flowy trails everywhere.

I could speak about that evening. We rode a west-oriented ridge to the Son-Kul lake (3000 m), facing the sunset and at the bottom, we met a shepherd on the back of his horse, swimming in the middle of the lake. The local specialty, Plov (meat, carrots and rice) was served that freezing night.

This is Kyrgyzstan. I could try to convince you, but the best way is just for me to say:

Go there and ride it. You cannot won’t regret it.