Iron Will and Pure Determination: Riding a Vintage Slavia Bike During L’Étape 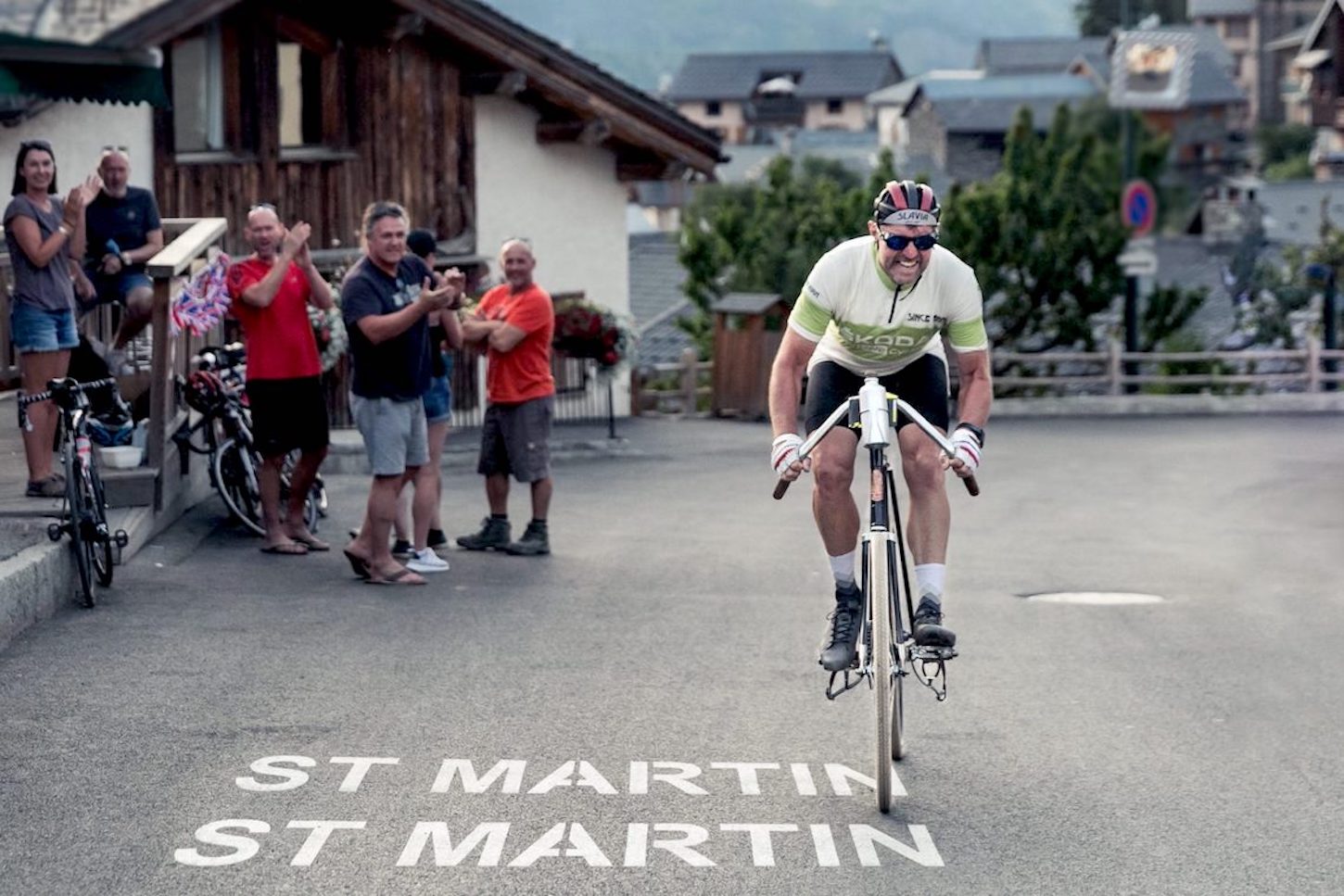 17 hours and 17 minutes. That’s how long it took Vladimír Vidim to conquer the 135-kilometer-long stage 20 of the Tour de France. Even though more than 12,000 fellow racers of the L’Étape du Tour race had crossed the finish line a long time before, he did not once consider giving up. This is a story of immense determination and a love of cycling.

In many respects, Vladimír was by far the hero of the day and the most admired participant of the whole event. “It was incredible. The SLAVIA bicycle replica was such a huge success! When I think about, there wasn’t a single person who didn’t show admiration, support or happiness. People were patting my back as if I were a Tour de France rider who had just won a stage. That really kept me going,” said Vladimír at the finish on the Val Thorens summit, 2,365 meters above sea level, roughly 30 minutes after midnight.

Let’s go back to the very beginning in January 2019. A mechanic from a professional cycling team and holder of multiple Czech records on vintage bicycles got together with a friend to contemplate another extreme challenge. It had occurred to him that he could bring one of the SLAVIA bikes back to life. SLAVIA was the name of bicycles made by ŠKODA when the carmaker first came into being: two gentlemen, Václav Laurin and Václav Klement, founded a bicycle-building company in 1895, then progressed to motorbikes and ultimately, the first car, and the rest is, well, history.

Vladimír, who has been driving ŠKODA cars for many years now, grew fond of a bicycle that saw the light of day in 1896 as the first SLAVIA racer. He decided that just reviving the bike wasn’t enough. “We said to ourselves that, seeing as ŠKODA sponsors the Tour de France, it would be great not only to build this legend, but also to ride a stage of the Tour on it. A straightforward and feasible plan – in theory. But, as is always the case, spanners were being thrown into the works from the off. Since (as far as anyone knows) no original specimen of the bike has survived, he decided to put the entire bicycle together from scratch, solely on the basis of period photographs, brochures, and other materials from the ŠKODA Museum archives.

The most difficult part was estimating the details and angles of the frame from the photos – the various experts Vladimír consulted all had different opinions. He created just about all of the bike himself – he welded and assembled the chromium-molybdenum pipes together, used a lathe to create the wooden handlebars, and made many other components. The preparation and construction of the bike took him three months, including the time his arm was in a cast. “There were six weeks when I could only use one arm. Luckily, that’s all I needed to control both the lathe and the miller,” says Vladimír with his admirable can-do attitude.

He adds that if the bicycle had been destined simply for a museum, it would have been ready much sooner, but he needed to be sure that this one would get him across the finish line. “I had to re-design the bike so it won’t fall into pieces along the way,” he laughs. The end result is a bike that weighs 18 kilograms and – just like the original – has no brakes or derailleur.

For the race itself, Vladimír fitted himself up with attire, a cycling bottle, and shoes consistent with the style at the beginning of the 20th century – when the Tour de France first took place (1903). Even though Vladimír’s SLAVIA was a fully functioning replica and he had taken his training absolutely seriously, not even he had foreseen how much “elbow grease” he would be needing.

He conquered the 135 kilometers, with a total elevation of 4,563 meters and three steep mountainous climbs, in 17 hours and 17 minutes because he had to run a fair part of the route – he could only brake by deploying pedal countermovement, which was pretty risky. “There was a crisis on the very first downhill section. The other racers were passing me by terribly fast so I decided it would be safer to get off the bike and run alongside it. I didn’t want to endanger the others or myself,” Vladimír explains.

He spent much of the race using the same strategy, spending at least 40 km on foot next to his bicycle. So, besides his excellent cycling feat, he also ran nearly an entire marathon in the mountains. Despite Vladimír’s concerns about potential technical problems, the SLAVIA handled the whole race without a single malfunction. Want to learn about the differences between this historical replica and a contemporary state-of-the-art bicycle?

Besides the running, there were other difficulties Vladimír had to cope with: “When I reached the 80th kilometre, we arrived late so the refreshment station was already closed. I was saved by an energy bar that another rider had dropped earlier and I had originally picked up as a piece of litter I was going to throw away later. A few hours on, though, I gratefully promoted it from litter to snack and ate it. Beggars can’t be choosers,” laughs Vladimír.

The friendly atmosphere and the solidarity of the other L’Étape participants made up  for all of his hardships. There was the moment he rode through a pass with thousands of cheering fans and the time an onlooking Frenchman refilled his water bottle without batting an eye. The support of his family was also a major help: his wife and son kept him company on the last night-time section of the race and lit up his way with the headlights of the ŠKODA SUPERB support car. “You know, all these ‘human experiences’ probably mean more to me than the adrenalin from the race, the finish or the success,” Vladimír adds.