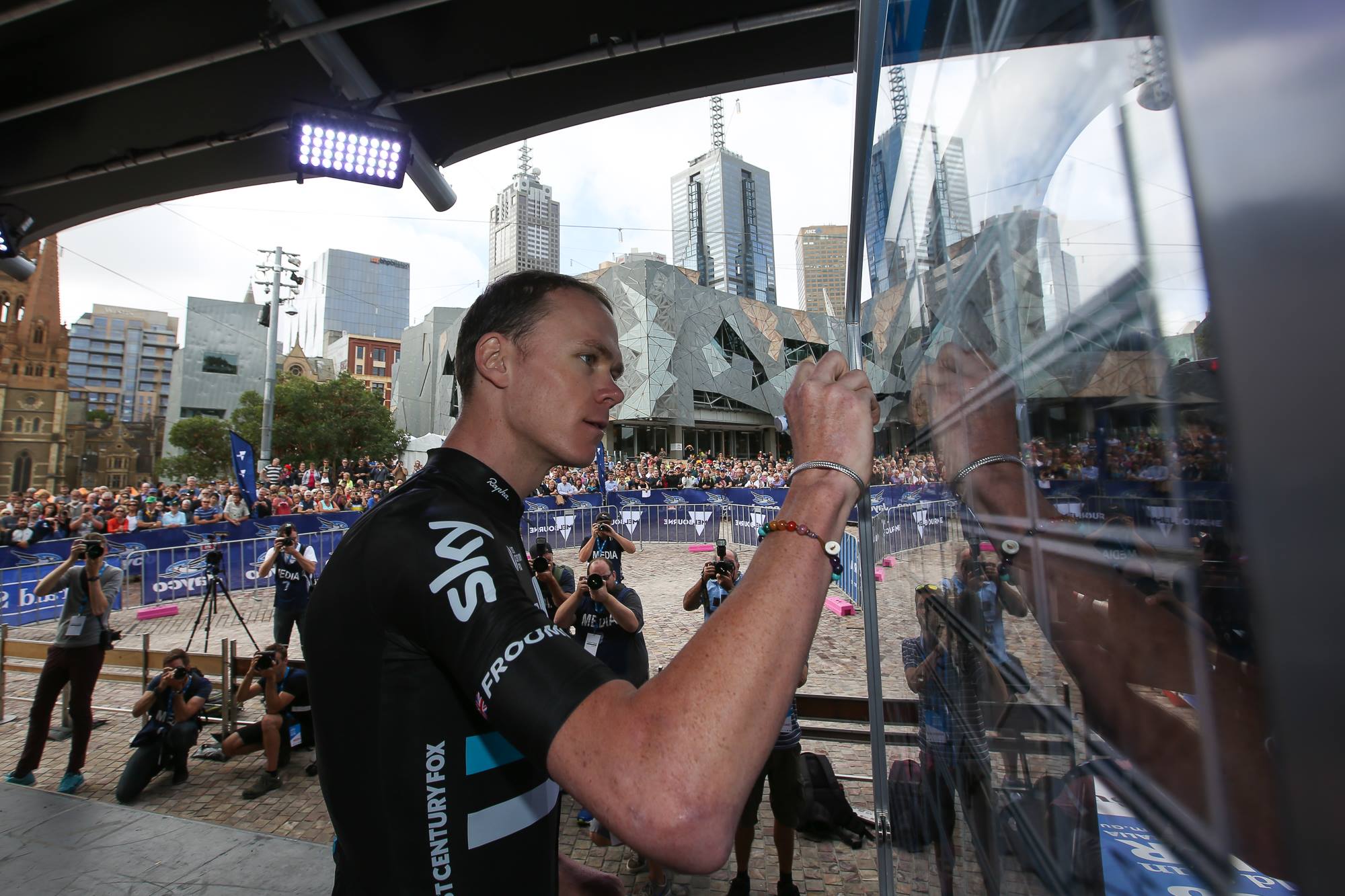 The first climbs of the 2016 Jayco Herald Sun Tour gave Team Sky all the ammunition they needed to make their intentions for the race clear with Peter Kennaugh and Chris Froome storming to a 1-2 finish in Stage 1 in Healesville.

The pair raced to the chequered flag with a 17-second advantage over a 29-man chase group led by Kiwi Dion Smith (One) who won the sprint for third.

The second of two climbs proved the launch pad for the Sky pairing after the day’s six-man breakaway came back to the peloton. Froome and Kennaugh put the hammer down about halfway up the Toolangi climb with a small chase group failing to close the gap.

“The race last week gave us quite a bit of confidence going into today,” he said.

“We had a plan for today’s stage which worked out absolutely perfectly. It was to make it hard going into that last climb for ‘Froomey’ to have a go and then I was just to follow wheels and judge the situation. If I felt like I could jump across, then do that.

“Massive thanks to the team and especially to ‘Froomey’ because once I got across to him I pretty much just sat on his wheel the whole way up the climb and then once I got over I was able to do some good turns and take it to the finish with him,” Kennaugh said.

Froome, who following today’s effort just might be the highest profile domestique in world cycling, warned that it will be a case of ‘catch me if you can’ for the rest of the peloton in a bid for Kennaugh’s grip on yellow.

“We don’t have any sprinters so we thought, well, we don’t have many opportunities so let’s just give it everything we’ve got. The guys did a fantastic job setting it up. They made it as hard as possible on the early slopes and then I took over.”

The two-time Tour de France champion was happy to play the role of key lieutenant for teammate Kennaugh.

“It’s a really nice feeling being able to give something back to Peter. The number of times he’s emptied himself for me out on the road and he’s been part of both my Tour de France victories so it’s nice to be able to do something for him now,“ Froome said.

“We’re going to try and protect that [lead] now.”

“Pete’s in great shape, he won Cadel’s race just a few days ago. We’ll try and keep the jersey on his shoulders.”

A breakaway group of six riders formed within the first 10km of the 126.1km stage, the peloton seemingly comfortable with their attempts to attack the race.

Not content to roll through the first sprint of the day at Warburton, Evers went on the offensive to claim six points of offer, followed by Hill and then Slater.

Just up the road, and with the first climb of the day on the horizon, the peloton started working on bringing the gap down to 3:20 with Team Sky and Drapac spending considerable time on the front driving the pace.

Less than five kilometers in length, what the Warburton ascent lacked in difficulty, it made up for with a tricky descent after Berlato led the breakaway to the top. Katsonis failed to navigate a tricky left-hand bend, also forcing Evers to be dislodged from the group. Back in the peloton, up-and-coming climber Lucas Hamilton (Australia National Team p/b Korda Mentha) and Patrick Sharpe (St George Merida) would also come to grief on the descent, bringing their day and race to an untimely end. Sharpe ending his day at Maroondah Hospital for x-rays on an injured wrist and shoulder.

Hill would claim bragging rights at the second intermediate sprint of the day back in Healesville ahead of House and Evers who recovered well to re-join the breakaway, however the end was nigh for the breakaway. Just four kilometres up the road and at the start of the Meyers Creek Road Cat. 1 climb, it was grupo compacto.

With the hammer down, the casualties came thick and fast with Australian Champion and former Sun Tour runner-up Jack Bobridge (Trek-Segafredo) and yellow jersey Clarke among several riders losing contact with the front of the peloton. Froome moved ahead, followed by Kennaugh and the writing was on the wall. The pair soon had 19 seconds on a three-man chase group of Damian Howson (ORICA-GreenEDGE), Jonathan Clarke (UnitedHealthcare) and former Australian Under-23 Champion Ben Dyball (Australia National Team p/b KordaMentha) with around 20km left to race to the finish line in Healesville.

“Today was back to work, back to business,” explained Kennaugh following his win. “We had a strategy and we stuck to it.

“Once we got out onto the flat and on to the descent [to the finish] then we just pulled away again.”

Kennaugh anticipates that the Team Sky show will resume shortly.

“I think the next two stages are probably sprint days,” he said. “We’ve got a strong team and obviously GreenEDGE will want to keep it together for Caleb [Ewan]. So then it will be down to that last day. I think that climb will suit me more than today with the climb being shorter.”