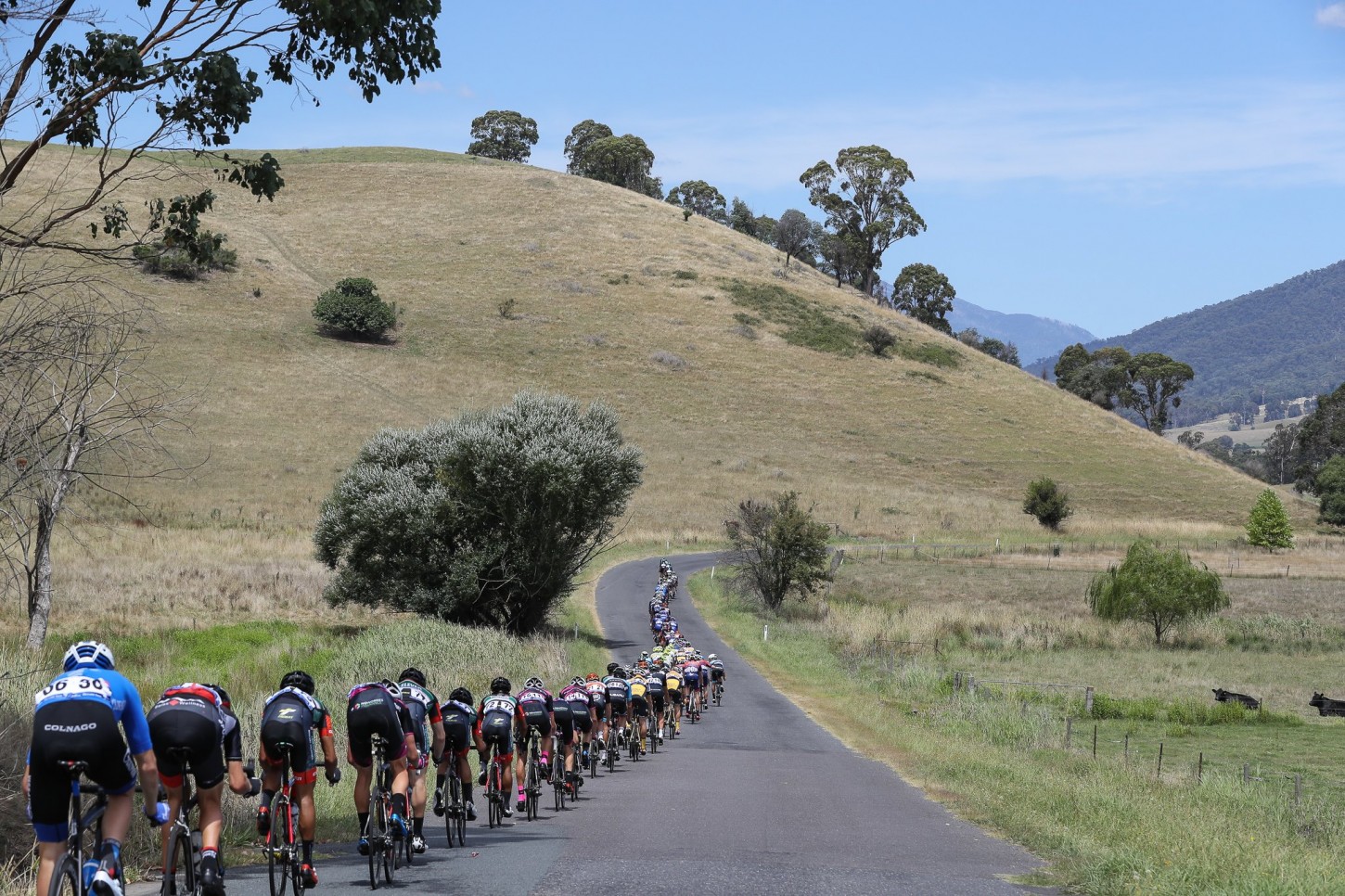 Australian rider Damien Howson has been rewarded for his toil as an ORICA-Scott domestique with a stirring victory at the top of Falls Creek ahead of his more-fancied rivals in Stage 1 of the Jayco Herald Sun Tour. It was his first victory as a professional.

Howson was catapulted into the yellow jersey with today’s win, with overnight leader Danny van Poppel (Team Sky) over 30 minutes back.

Howson and Elissonde attacked a splintering peloton around halfway up the 30km climb to the finish, with JLT Condor’s Steve Lampier the lone man standing from the day’s eight-man breakaway. Howson was finally able to rid himself of the Sky Frenchman with two kilomtres left to race and had time to consider his celebration as he crossed the finish line, eventually raising both arms in the air.

“Once I hit the bottom of the climb I started to feel pretty good,” Howson said. “I was a bit average before that but I was pretty confident once that climb started and I got a bit of a gap on the main field and I was with Kenny who’s obviously a strong climber in his own right. But I did back myself if I could shake him in those last couple of kilometers then it was a matter of holding as much time as I could to the line.”

“It’s a dream scenario to have enough time coming through the finish over the last kilometre with a nice gap thinking of what salute to do… with the best climbers behind you, to finish off the way I did I was very happy with that.”

Hindley’s ride was nothing short of a revelation. The youngster cementing his position as one of Australia’s next generation following his fifth overall at last year’s Tour de l’Avenir. In fact, it was a stage where the KordaMentha Australian National team excelled, storming home with five riders in the top 10. Hindley took the lead in the State Government Victoria Young Rider Classification and will wear the white jersey for Stage 2 on Friday.

“It was pretty scary coming into that last kilometre, I didn’t know if I was going to catch up to Kenny or if Froome was going to fly past me so I had my head down and was just giving it everything, really,” he admitted.

“The plan for everyone [in the team] was always to ride aggressively in the last three kilometers because that’s where you make time up on this climb.”

Asked if he would chase the yellow jersey over the coming days, Hindley was content to bask in the glory of his efforts for just a little while longer.

“We’ll take it one step at a time I guess but it’s good to have so many guys up there and lots of options,” he said. “I think we’ll definitely try and ride aggressively and try and take the jersey.”

“It would be pretty good. It’s an awesome tour but I’m pretty happy with the white jersey at the moment.”

“It’s nice to be there but I would prefer Chris took the win today than me be third. Maybe that’s for later in the week,” he said before suggesting that the fight for the yellow jersey was far from being over.

“We don’t ride for third place… we’ll try something. There is still time for the final selection.”

It was a sentiment shared by Team Sky Directeur Sportif, Brett Lancaster.

“We’ve got some hard days coming up though so we’ll shake it up and see what happens. It’s not over yet.

“It will be very tricky to get over a minute on Howson but it’s bike racing and Froomey is one of the best bike riders in the world. We’ll never give up. It’s not over until the fat lady sings.”

The peloton left Wangaratta for the longest day on the 2017 Jayco Herald Sun Tour cheered on by a sizeable local crowd ahead of 174.2km in the saddle.

Ross would be the first man dropped from the group, but only as the 30km climb up Falls Creek began, with 2013 Herald Sun Tour winner, Watson keeping the pressure on.

With 15km remaining, and the remnants of the breakaway holding a gap of around a minute, Howson and Elissonde charged ahead forcing Lampier and Watson to go for broke. Watson would eventually succumb while Lampier defied the odds to stick with Howson and Elissonde.

“Howson and Elissonde came across and I just sat there for a bit and then it was lights out,” Lampier said, having earned the Bicycle Beer Most Aggressive Ride prize for his performance. It’s been an extraordinary summer for the JLT Condor team, finishing in the top three of every race they’ve entered until today, although very much content with Lampier’s efforts. He was eventually dropped by the duo with 10km to go.

The gap to a splintered chase group was around 50 seconds with three kilometres remaining and the finish line in sight, leaving Hindley to go on the offensive. Further up the road, Howson left Elissonde behind with two kilometers left to race while Froome and one of the other favorites for the stage, Esteban Chaves (ORICA-Scott) could only follow the charge of Hindley’s teammates.