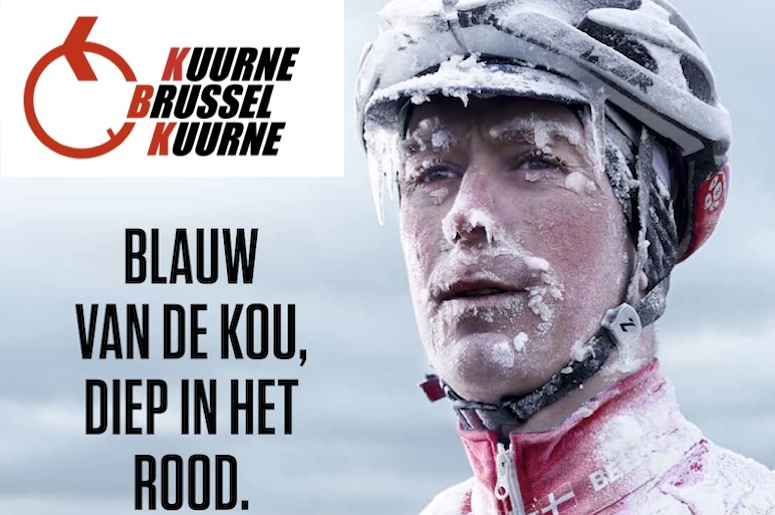 Despite becoming isolated from his team during today’s race, Mark Cavendish (Etixx-Quick-Step) fought his way through the bunch sprint, to emerge victorious in this year’s Kuurne-Brussels-Kuurne.

Philippe Gilbert (BMC Racing) tried to ride clear of the field during the final four kilometers of today’s 196.3 kilometer – right up until the red kite banner.

However, despite his perseverance, the BMC rider was ultimately swept up by the chase just as he made his way through the final left-hand corner.

Given the fractionalized head of the race, with virtually every lead-out “train” in chaos, it became every rider for himself.

From there, Cavendish succeeded in forcing his way to front, to beat Alexander Kristoff (Katusha) and Elia Viviani (Sky) in a sprint for the line.

“The team were incredible the whole day, really,” he said, acknowledging that come the sprint he was more or less on his own.

“We used up guys too early [because of the head winds]. Tom [Boonen] went to go, but I had already left him to go onto Kristoff’s wheel. I know him, and he’s been going good this year. I’m super proud to get this victory for Etixx-Quick-Step.”

“I felt really tired all day. In the final, the team did a good job — perfect, actually — but Mark was just faster at the end.”

However, a further 5 kilometers later, and their gap had fallen to less than a minute, as the chase which was being principally led by Tom Boonen, continued to bare down on them.

From there, Boonen and Sep Vanmarcke (Lotto) continued pushing the pace up the climb of Oude Kwaremont, while the rest of the peloton began to fall part behind them – with the exception of Zdenek Stybar and Cavendish (Etixx), Jean-Pierre Drucker and Philippe Gilbert (BMC Racing), Kristoff, and Ian Stannard with Sky teammate Viviani, who managed to stay onboard.

Ahead, the breakaway group was clinging to a slight lead of just 20 seconds. But, as the race reached the 60 kilometer mark, they were caught.

With 50 kilometers remaining, the now 19-rider lead group was holding onto a minut advantage over the chase, which was being ushered by MTN-Qhubeka.

As the race tackled the final climb of the day, the Nokereberg, Stannard and Boonen took turns pushing the pace, followed by BMC’s Drucker.  With 40 kilometers remaining, they breakaway group’s had fallen to a mere 47 seconds over the chase. And, a further 5 kilometers later, and the chase had them within their grasp.

From there, Boeckmans (Lotto) tried his luck in riding clear, but with no reinforcements, he was quickly reeled back in.

As there race approached the the beginning of the final 2 laps of the 16 kilometer finishing circuit, there seemed to be a lull in the lead group.

Meanwhile, back in the chase, Katusha, followed by Team Sky and later Lotto, continued to peruse in earnest, with Sky ultimately bridging 5 of its riders to the front group during the final 5 kilometers.

It was then that Gilbert decided to attack, quickly opening up a slight gap of his own.

With just 2 kilometers remaining, Gilbert was still clinging to a 10 second advantage.

As Gilbert made his way under the 1 kilometer banner, the BMC rider was steadily losing ground.

Alas, the Belgian rider was caught by the chase during the final corner, with Cavendish rising out of the final chaos as the victor.