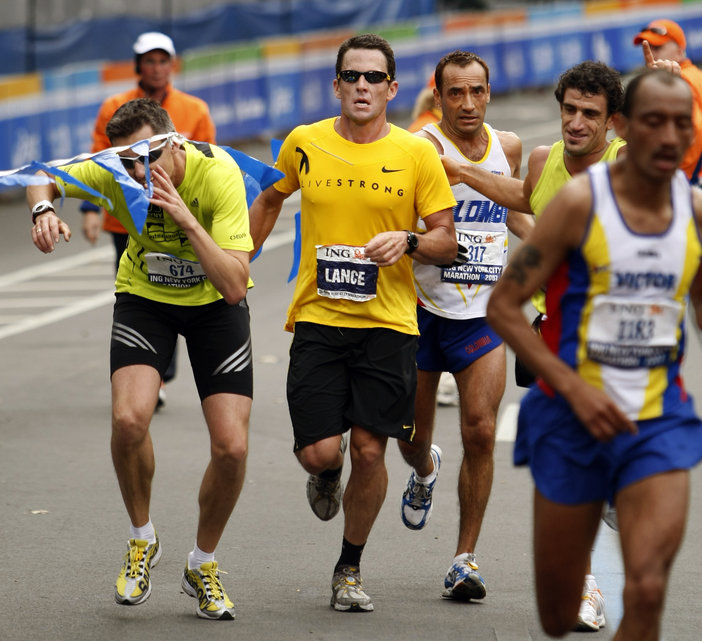 While his racing career has long-since ended, and he’s been banned from participating in virtually any kind of sanctioned sporting event, during an interview last week, Lance Armstrong did however express, his interest in participating in an ultra marathon or an obstacle-course race next year.

“Part of me wants to go run an ultra, or find a 100-miler to run or go find an obstacle-course race that’s super challenging,” Armstrong said on Movember Radio, adding that the endurance world is “blowing up” in popularity. “Go try that. I think ’16 would be the year to do that.”

However, given the life-time ban Armstrong received by the US Anti-Doping Agency (USADA) back in 2012, it’s a tricky area as to whether or not he can participate in such an event.

Therefore, so long as the event is not under a code signatory and the event does not otherwise recognize a Code sanction, then there is no prohibition as set forth in the WADA Code, which would prohibit Armstrong from participating.

Armstrong said during his interview, that he “very, very rarely” rides his road bike.

“I run more, I swim more,” he said. “If I’m in Colorado in the summer, I’ll do long hikes. Then I guess in the summer I would ride a mountain bike.”

In fact, Armstrong says he does more “Uber” driving for his five children, than he does riding these days.

“Before all this goes down,” Armstrong said of the last few years, “life was like 100 miles an hour. Then everything happens, my situation changes drastically, and life goes to like 10 miles an hour. So it feels like it’s gradually picking up. 55’s the speed limit. We might be doing 25 now or 30. So it’s good. As rough as this has been on all of us, it’s nice to have a simple life.”

During his interview, Armstrong once again seized the opportunity to reflect on his past.

“There are really two big mistakes that I made in most people’s minds, everybody’s mind,” he said. “That was the doping and the treatment of others. I think as time goes on, more and more people understand that the doping just was what it was. It really was completely pervasive, and you really didn’t have a choice. We did have a choice. Your choice was to go home, which nobody took that choice. Everybody geared up and stayed. But all those people that made that first mistake, which now nobody cares about, none of them treated people like [expletive]. None of them attacked another human being. None of them sued another human being. And I did all of those things. So my words to an 18-year-old me would be, I understand you may face some decisions in this sport but, man, don’t ever isolate, attack, ostracize, incite another human being, because we’re not talking about this because I doped. We’re talking about all of this because of the way I treated other people. That’s my mistake, and I own that, and I’ve spent the last three years trying to make amends with those people.”

“The most important word in all of this is betrayal. The people that have a tremendous sense of betrayal, that’s a walk that I’ll walk the rest of my life. I have to now do that just because of the attitude that I had.”