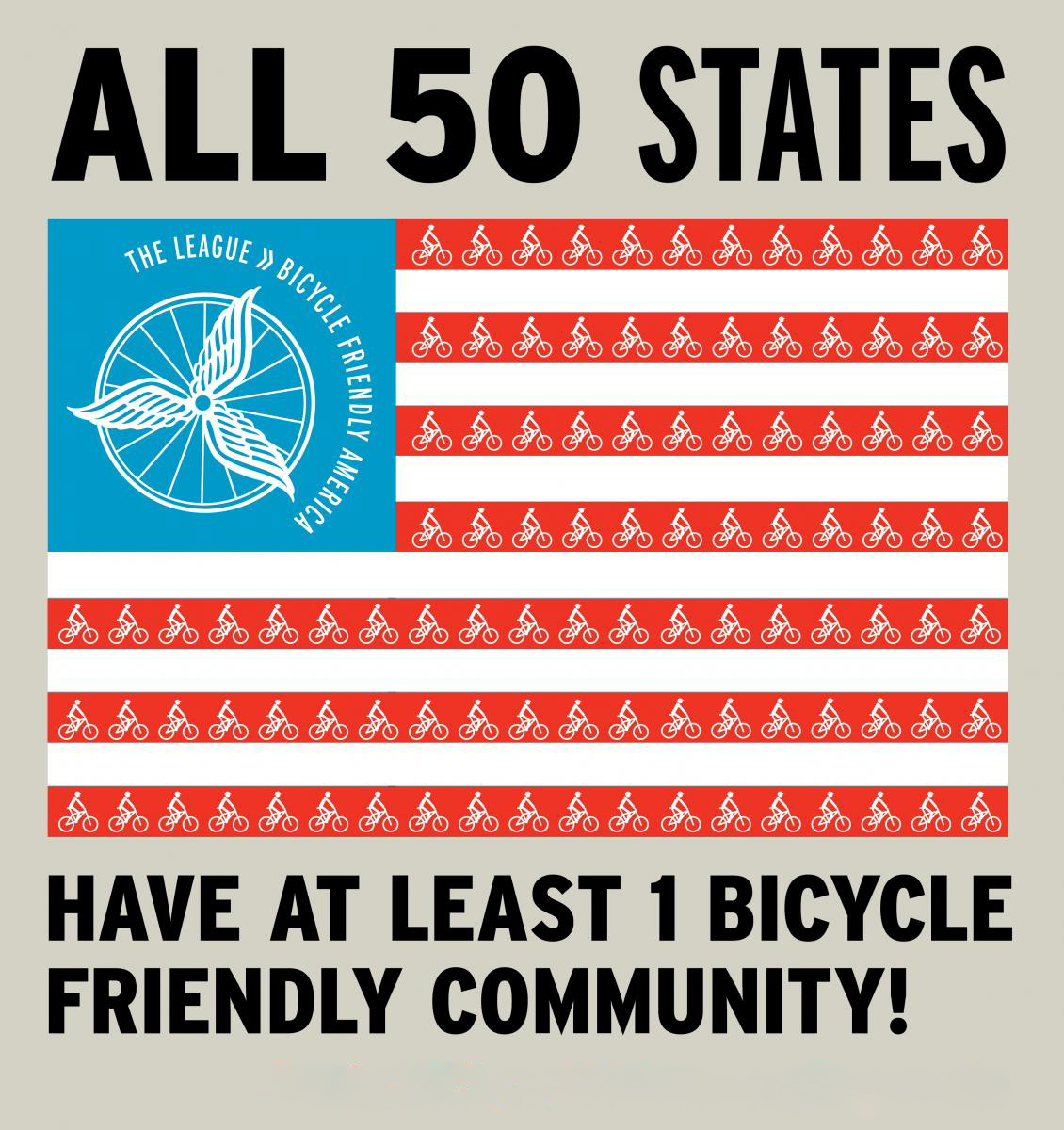 League of American Bicyclists announced its list of the “friendliest” states to bike in, based on each state’s goals toward infrastructure and advocacy.

For the eighth year in a row, Washington continues to lead the nation, but states like Massachusetts, Pennsylvania and Utah moved up the ranking for 2015.

From League of American Bicyclists:

On the first day of National Bike To Work Week, the League of American Bicyclists has released its 2015 Bicycle Friendly State ranking.

For the eighth year in a row, Washington continues to lead the nation, but states like Massachusetts, Pennsylvania and Utah moved up the ranking in 2015, shaking up the top 20.

“We’re encouraged to see measurable progress and improvement in many states, including Massachusetts, Pennsylvania and Utah,” said League President Andy Clarke. “We hope to see continued improvements as more statewide leaders recognize and invest in the many benefits bicycling has to offer.”

Utah made the jump from #8 to #5 this year. The state adopted a Bicycle Master Plan in 2014, setting inter-agency goals for inclusion and support of biking and walking infrastructure in transportation projects.

“We are very proud of the high quality of life enjoyed by Utahns,” said Utah Gov. Gary R. Herbert. “We have worked to support and provide world-class bicycling opportunities across our state, both for commuting to work and enjoying the natural beauty around us. As we meet the evolving demands of our state and plan for the future, amenities like this will help Utah continue to be one of the greatest places to live, work and play.”

Massachusetts jumped 6 spots to #4 in the ranking, thanks in part to a new transportation bond, which set aside more than $400 million over the next five years for biking and walking projects, Complete Streets projects and the continued implementation of MassDOT’s GreenDOT Initiative.

“This is a tremendous recognition of our collective efforts and the many initiatives in place throughout the Commonwealth which have contributed to our current status as the 4th friendliest bicycle state,” said Stephanie Pollack, Massachusetts Department of Transportation Secretary and CEO. “This has been a great team effort and I want to commend all of our partners in regional and municipal government, and in the bicycling advocacy community for their efforts. And of course, thank you to our many bicyclists across the state who continue to choose bicycling as both a means of transportation and recreation.”

Pennsylvania also made a move up the ranks, going from #19 to #12. The state passed Act 89 at the end of 2013, which is a comprehensive transportation funding plan that includes $84 million in multimodal investments. A minimum of $2 million annually will be directed to biking and walking projects specifically, which will help the state implement the federal Transportation Alternatives Program.

“We are very proud that Pennsylvania has climbed to 12th in the ranking of Bicycle Friendly States,” said Pennsylvania Acting Secretary of Transportation Leslie S. Richards. “The new ranking reflects a collaborative effort among various stakeholders and our citizens to recognize bicycles as a viable and clean mode of transportation.”

The BFS program is more than an annual assessment. Throughout the year, League staff work actively with state officials and advocacy leaders to help identify and implement the programs, policies and campaigns that will improve conditions for bicyclists.