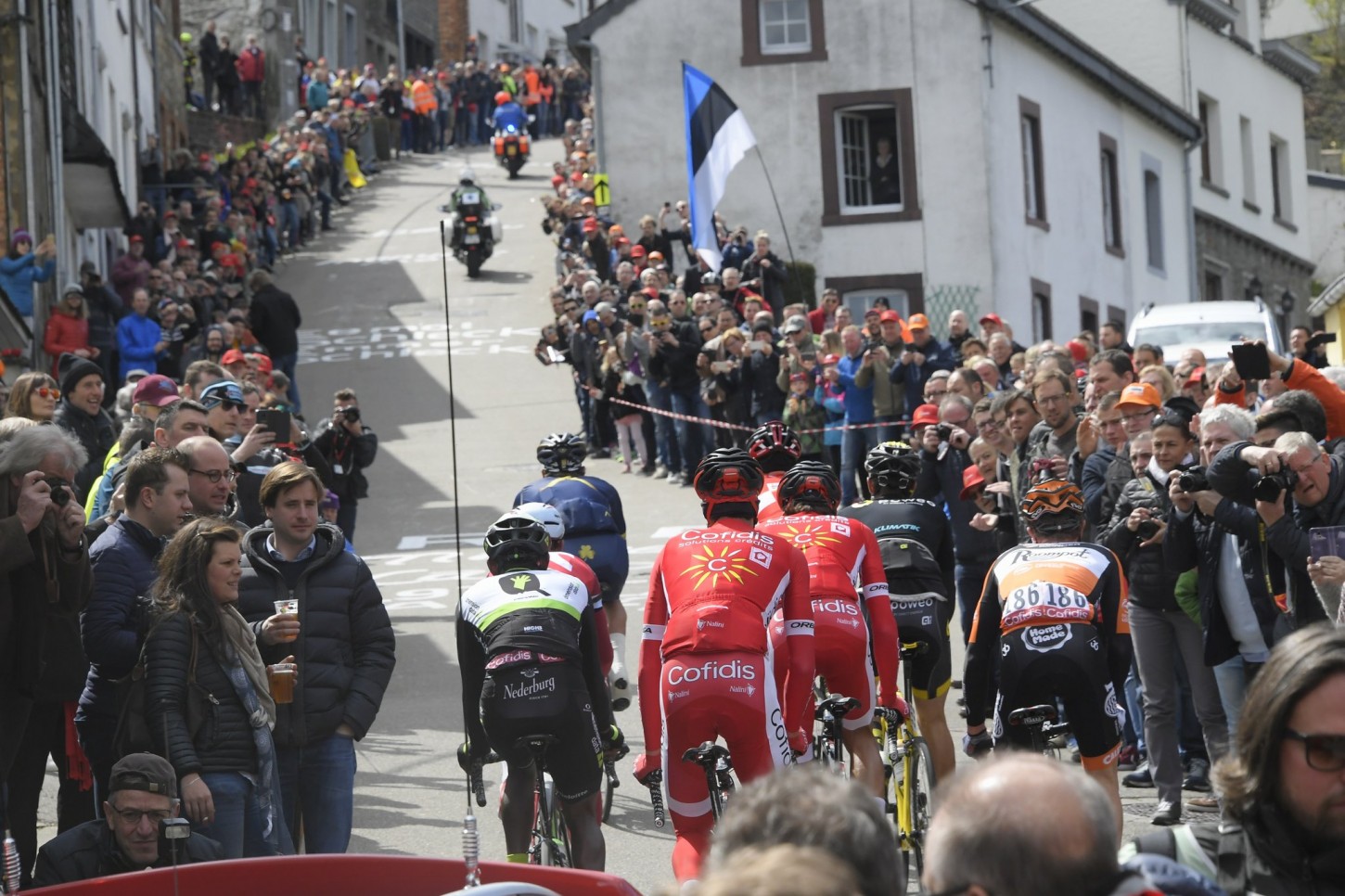 Four days after winning his fifth Flèche Wallonne, Alejandro Valverde (Movistar) dominated Liège-Bastogne-Liège for the fourth time in his career Sunday, equalling Moreno Argentin’s tally, only one shy of Eddy Merckx’s record. El Imbatido, once again winner ahead of Dan Martin, couldn’t contain his emotions on a day that began with a tribute to the late Michele Scarponi. For Valverde, this a third double Flèche-Liège after 2006 and 2015.

An emotional tribute to Michele Scarponi preceded the start of the 103rd Doyenne. The 200 participating riders and the audience in Liège celebrated a minute of applauses, with the eight Astana riders wearing black armbands at the front of the pack.

Olivier Pardini (WB Veranclassic) missed the move but decided to go in pursuit at km 15. A major solo effort almost granted him a spot at the front of the race, as he cut to 5 seconds a gap that previously rose above 2 minutes… but the Belgian came up short and eventually missed his shot at joining the leading group after the first climb of the day, the côte de la Roche-en-Ardenne. Pardini, who broke away on the Flèche wallonne, was finally caught by the peloton after 100 km of racing. At the moment, just after the turning point in Bastogne, the leaders were enjoying the maximum gap of the day: 13’25.

First moves on the Ferme Libert and La Redoute

Team Sky and then Quick-Step Floors decided to answer Alejandro Valverde’s call, helping Movistar control the race and slowly cut the gap. The new trilogy of climbs, with the côte de Pont, the côte de Bellevue and the côte de la Ferme Libert, was the opportunity to make the race harder and prepare later attacks. Simon Gerrans (Orica-Scott) tried to break away but the 2014 winner couldn’t open a real gap.

Sergio Henao (Sky) tried his luck on the côte de la Roche-aux-Faucons and the côte de Saint-Nicolas but never managed to actually get rid of the teammates Michael Albasini (Orica-Scott) and Alejandro Valverde (Movistar) needed to control the race until the finish. Stéphane Rossetto (Cofidis) was the last of the early attackers to be caught, after Tim Wellens (Lotto Soudal) joined him at the front of the race with 9 kilometers to go, only to drop him and then be caught on the côte de Saint-Nicolas.

Davide Formolo (Cannondale-Drapac) enjoyed the following downhill to open a gap with only 4 kilometres to go. The Italian puncheur still had a margin of a few seconds in the final kilometre, when Dan Martin (Quick-Step Floors) made his move. Once again, the 2013 winner entered the last curve ahead of everyone. But Alejandro Valverde, as he did Wednesday on the Flèche wallonne, had perfectly timed his sprint to bring home a fourth victory on the Doyenne. Michael Kwiatkowski (Sky) finished third.